What the Islamic Veil Reveals

What the Islamic Veil Reveals 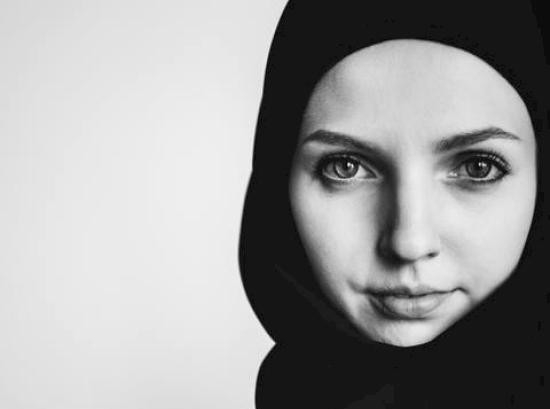 The geographical and historical diversity of Islam is substantial. The veil that Muslim women wear is an instrument of cultural and religious identity and has no extreme connotation within Islam. However, the veil has become a hot-button issue in France, which has suffered from attacks by Muslim extremists. The choice to wear the Islamic veil in France is seen by some as a rejection of French identity. Should the French appropriate and welcome Muslim women who wear the veil? Should the Muslim women reject the veil in order to show their allegiance to France? Can their identity come both from France and Islam? During his talk at the Boisi Center, Pierre de Charentenay, S.J., will provide an overview of the situation in France and provide resources for answering these difficult questions. 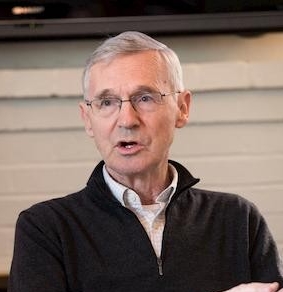 Pierre de Charentenay, S.J., holds the 2015-16 Gasson Chair at Boston College. Since 2014 he has been a member of the college of writers for the Civiltà Cattolica, the magazine of the Roman Jesuits overseen by Vatican authorities. He is a former president of the Centre Sèvres, the Paris Institute of Higher Education of the Society of Jesus, and was the Chief Editor of the monthly journal of the Jesuits of France, Études, from 2004 to 2012. He is the author of nine books including Les Philippines, Archipel Asiatique et Catholique, Regagner L'Europe and Les Nouvelles Frontières de Laïcité and over 500 essays featured in French and foreign journals and newspapers. He has also given numerous conference presentations and workshops across the globe. Fr. de Charentenay entered the order of the Society of Jesus in 1965 and received his Ph.D. in political science from the Fondation Nationale des Sciences Politiques in Paris in 1980. 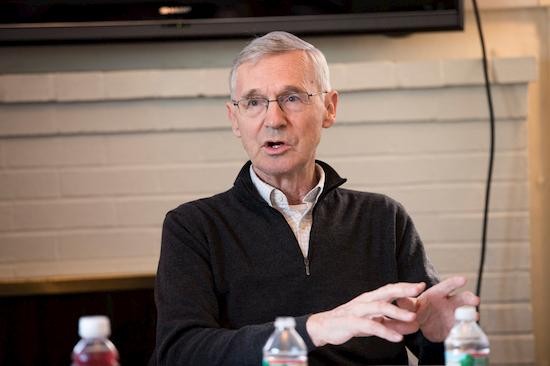 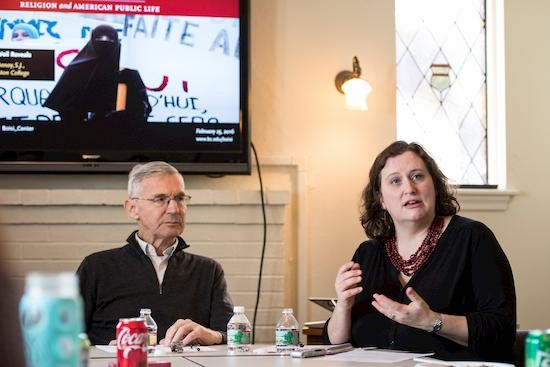 Pierre de Charentenay, S.J., 2015-16 Gasson Chair in the department of political science at Boston College, spoke at the Boisi Center on February 25 about the role of the Muslim veil in contemporary French society. Drawing on research from his book, Nouvelles Frontières de la Laïcité, de Charentenay spoke about how French culture has become hostile to public forms of religious expression, especially those from its Muslim community members.

According to de Charentenay, the debate over the veil occurs within France because it has an individualistic understanding of religion, has been a specific target for terrorist attacks and because of the migratory crisis that has resulted from the Syrian Civil War. Second and third generation Muslim immigrants are more likely to wear the veil than first generation immigrants to France were.

Controversy over the veil in France began in the 1990s when several Muslim girls wore their hijabs to public school. This sparked the creation of the Stasi Commission, which in 2004 passed a law banning all ostentatious religious signs in government places. At odds with Muslims’ demands for greater religious expression in France is the increasingly pervasive culture of laïcité, which promotes the absence of religious influence on the state and holds that there should be no expression of religion in public space.

The debate over the veil in France is only one of the many issues dividing the Muslim minority from mainstream society. Another major problem is the extraordinarily high rate of unemployment in the suburbs of France’s major cities, where a majority of the Muslim population lives.

For de Charentenay, the increased use of the Islamic veil reveals that Muslim immigrants feel at home in France and in Europe more broadly, but seek to maintain their religious identity. According to de Charentenay, only time will tell if France develops into a more multicultural society, tolerant of diverse religions, or completely closes the public sphere to any such forms of religious expression.

Cesari, Jocelyne. When Islam and Democracy Meet: Muslims in Europe and in the United States. (Palgrave Macmillan, 2006).

George Packer's article in The New Yorker, "The Other France."

Jonathan Laurence and Justin Vaïsse's article in Foreign Policy, "The Dis-Integration of Europe."

Jonathan Laurence's article in The New York Times, "How to Integrate Europe's Muslims."

Mark Lilla's articles in The New York Review of Books, "France on Fire," "France: A Strange Defeat," and "Slouching Towards Mecca."

In response to the shocking terrorist attacks in France, education Minister Vallaud-Belkacem called for reforming the teaching of secularism to prevent future radicalization. She also admitted that too often French secularism, known as laïcité, has been misappropriated by far-right politicians as a tool against Islam and the Muslim minorities in France. In his upcoming talk on February 25 at the Boisi Center, Pierre de Charentenay, S.J., will address the divisive issue of veiling in French public schools and speak to reconciling French and Muslim identities.

"Until French policymakers find a way to give all citizens equal rights to communal attachments, France will not be able to find a way to bring them fully together" argues BC political science professor Jonathan Laurence in his recent piece for Foreign Affairs. This spring, Pierre de Charentenay, S.J. will speak at the Boisi Center on “What the Islamic Veil Reveals.”