What's So Political About 'Political' Islam?

What's So Political about 'Political' Islam? 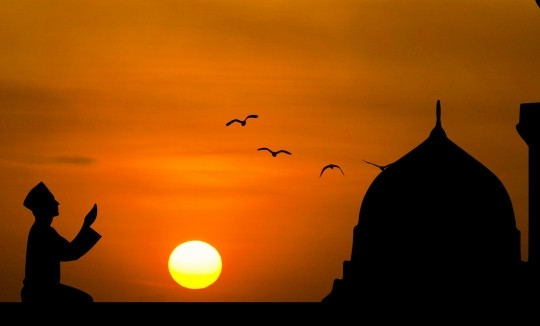 Few things are as settled in the contemporary discourse today regarding Islamic terrorism as the view that true Islam is non-political and that the 'political' Islam practiced by the extremists is bad.  Popular use of neologisms like "Islamo-fascism" and "Islamism" serve merely to confirm such a bias.  But is the prevailing notion correct? Are the origins of such an understanding Islamic or non-Islamic? And what about the older approach, which stresses the comprehensive nature of the Divine Law? David DiPasquale will offer these and related questions, and ask whether the emergence of liberal reform throughout the Muslim world might depend in some manner on considering opportunities made possible by a renewed appreciation of the older view. 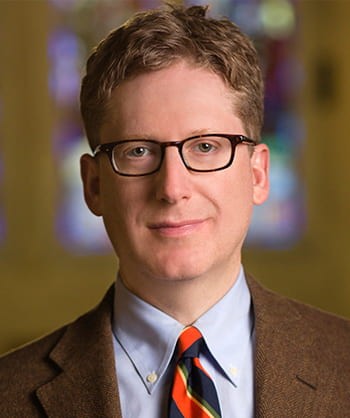 David DiPasquale studies the intersection between Islamic law and political thought in pre-modern and contemporary contexts; the transmission and recovery of Greek science by Arabic-speaking Muslims in the Middle Ages; and the political philosophy of Alfarabi, Avicenna and Averroes. In addition, he is interested in the relation between Islam and the West.  Under contract with Cambridge University Press is his book Alfarabi’s Book of Dialectic (Kitab al-Jadal): On the Starting Point of Islamic Philosophy, which includes the first English translation of the full Arabic text. He has taught many courses, including Introduction to Islamic Civilization; Islamic Political Philosophy; Islam and Liberal Democracy; and the Political Philosophy of Alfarabi. 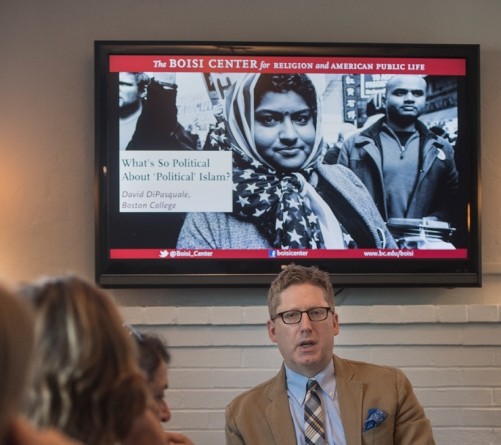 On September 12, 2017, Assistant Professor of the Practice of Political Science at Boston College, David DiPasquale, (center) spoke about the role of the law in Islam and the essential distinction between conceptions of divine law and human law at a Boisi Center lunch lecture. 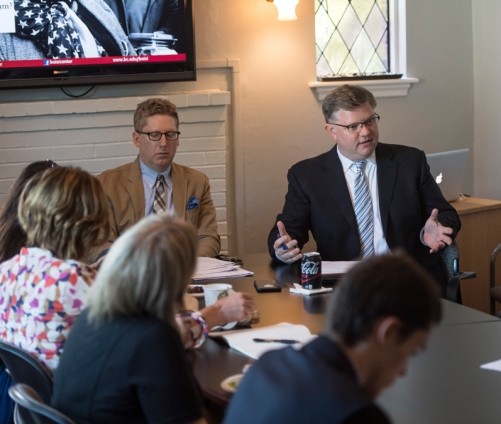 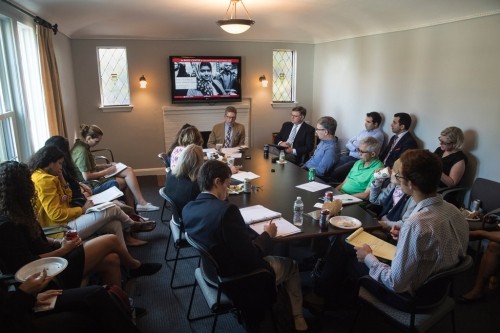 David DiPasquale, professor of the practice of political science at Boston College, studies the intersection between Islamic law and political thought in pre-modern and contemporary contexts. In a September 12 lunch lecture at the Boisi Center, he brought this focus to bear on the question: “What do we mean when we call Islam ‘political’?”  He contended that placing the word ‘political’ in front of Islam is an unhelpful and distorting Western bias.

DiPasquale highlighted how in Islam man is seen as inherently political. However, with the beginning of the Enlightenment in the 17th century, writers such as Benedict de Spinoza and Thomas Hobbes began to articulate worldviews that cast ‘political’ as an unnatural concept. DiPasquale then argued that when ‘political’ is used to describe Islam, it is used to distance Islam from this Western post-Enlightenment view. If politics are somehow unnatural to society, then politics are certainly unnatural to religious belief and practice.

This, DiPasquale outlined, contributes to how the West understands the “public” versus “private” sphere. In Islam, there is no private sphere; “God is closer to you than your jugular.” Indeed, Sharia, an Islamic legal code introduced in the seventh century, seeks to manage the everyday lives of Muslims in a manner that is widely seen as ‘political’ today. So, DiPasquale concluded, when Western understandings of Islam take on the language of “Islamism,” Islam becomes a monolithic human ideology in the same vein as communism, and must be “cured” by liberal ideals.

In the question and answer session that followed, audience members wondered about the implicit and explicit contributions of political thought on religious teaching across religious traditions.

Osman, Tarek. Islamism: What it Means for the Middle East and the World. New Haven: Yale University Press, 2016.

Wood, Graeme. The Way of the Strangers: Encounters with the Islamic State. New York: Random House, 2016.

Waterbury, John. "Review: The Way of the Strangers: Encounters With the Islamic State; The Master Plan: ISIS, al-Qaeda, and the Jihadi Strategy for Final Victory." Foreign Affairs. May/June, 2017. https://www.foreignaffairs.com/reviews/capsule-review/2017-04-17/way-strangers-encounters-islamic-state-master-plan-isis-al-qaeda

"Islamic Exceptionalism: How the Struggle Over Islam Is Reshaping the World." A conversation with Shadi Hamid and Elise Labott at the Aspen Ideas Festival, 2016 https://www.aspenideas.org/session/islamic-exceptionalism-how-struggle-over-islam-reshaping-world

Check out this article in the Economist, which discusses the Muslim Brotherhood. Once a force for revolution and change during the Arab Spring, the group is now in hiding from the same autocratic governments it once hoped to overthrow. Is there a future for a political Islam?