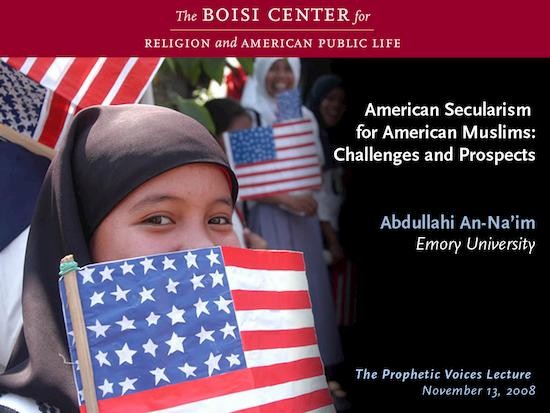 Secularism is deeply historical and contextual. American secularism strikes a balance between the separation of religion and the state and the acceptance of a public role for religion. Because of this balance, American Muslims should be able to positively engage with American secularism, but they face challenges in developing and implementing strategies for involvement. This lecture will identify some of those challenges and propose ways of responding to them from both a Muslim and non-Muslim perspective.

Professor An-Na’im is the author of African Constitutionalism and the Contingent Role of Islam (2006); and Toward an Islamic Reformation: Civil liberties, human rights and international law (1990) (translated into Arabic, Indonesian, Russian and Farsi). His edited publications include Human Rights under African Constitutions (2003); Islamic Family Law in a Changing World: A Global Resource Book (2002); Cultural Transformation and Human Rights in Africa (2002); The Cultural Dimensions of Human Rights in the Arab World (in Arabic, 1994); Human Rights in Cross-Cultural Perspectives: Quest for consensus (1992); Human Rights in Africa: Cross-cultural perspectives, with Francis M. Deng (1990). He has also published more than fifty articles and book chapters on human rights, constitutionalism, Islamic law and politics. 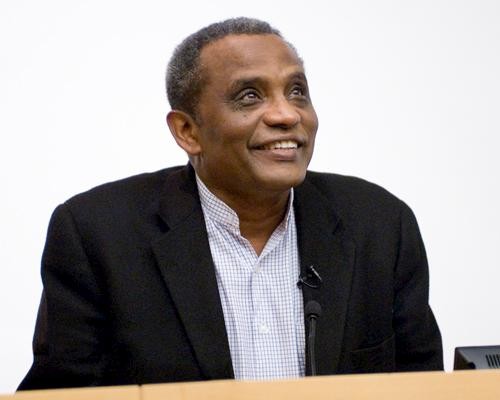 Abdullahi An-Na'im at the Boisi Center 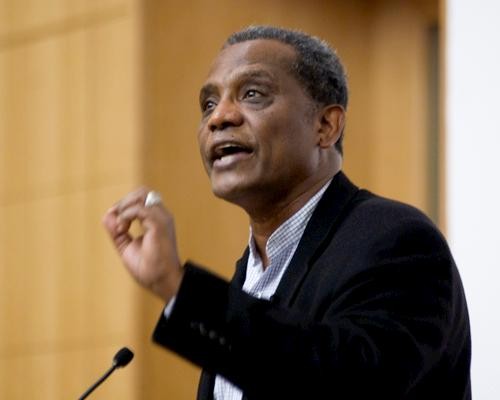 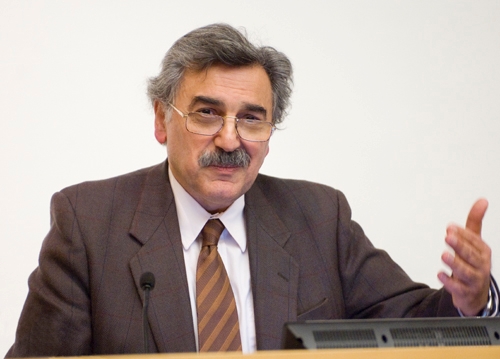 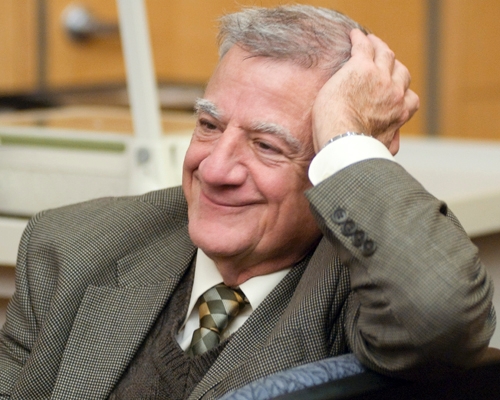 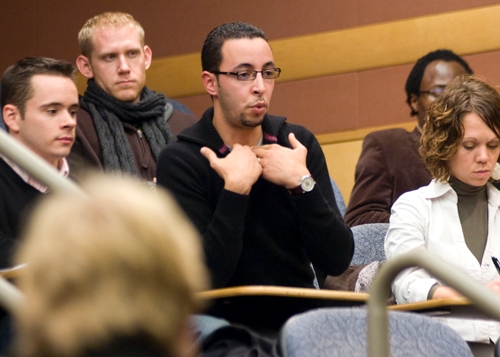 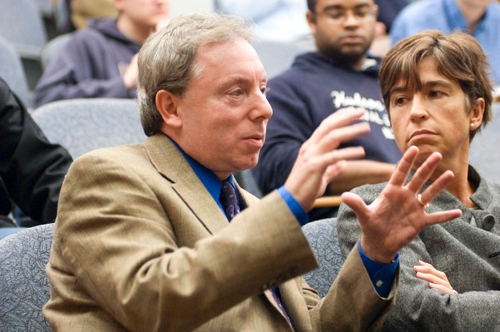 On November 13 the Boisi Center brought Abdullahi An-Na’im, the Charles Howard Candler Professor of Law at Emory University, to campus to deliver our Prophetic Voices Lecture. Professor An-Na’im, a native of Sudan, is a world-renowned scholar of law and religion, who has written extensively on human rights, constitutionalism, Islamic law and politics. His lecture was entitled “American Secularism for American Muslims: Challenges and Prospects.”

Defining secularism was, of course, a central theme of An-Na’im’s lecture. As he uses the term, secularism entails neither the exclusion of religion from public life nor the absence of religion in society, but rather the government’s position of neutrality with regard to religious doctrine. Though citizens, collectively and individually, need to take strong moral positions, secularism means that the laws ought not to do so; the secular state (i.e. the government), An-Na’im said, must be “normatively minimalist” in order that people in the society have the freedom to live their lives in accordance with their religious beliefs. “My pursuit of a secular state,” he stated, “is undertaken precisely to enable a religious society. I need the state to be secular so I can be the Muslim I choose to be.”

In fact, An-Na’im argued, a state cannot properly be said to be religious at all because only individuals can be religious, and individuals (here An-Na’im spoke only of Muslims) can only be religious by conviction and free choice, not by the coercion of law. Crucial implications follow from this argument, including the understanding that despite longstanding and vigorous claims to the contrary, there is no such thing as an Islamic state. “The state was never ‘Islamic,’ at any time,” An-Na’im told the audience. “The ‘Islamic state’ is an historical misconception, a logical fallacy and a practical impossibility.” Furthermore, Shari’a (the religious law of Islam) cannot be enforced by the government, for if religious law is administered by the state, it is, by definition, no longer religious.

Secularism is inherently contextual, according to An-Na’im, and every society must negotiate over time the proper role of religion in public life. The American negotiation continues today, based upon the eighteenth century Constitutional framework of non-establishment and religious freedom, but adjusted in recognition and response to changing realities. Just as Catholic immigrants challenged the prevailing (Protestant) norms of American secularism in the nineteenth and early twentieth centuries, Muslim immigrants in recent decades present a challenge to the prevailing “Judeo-Christian” norms of our day. Yet in important ways, An-Na’im argued, American Muslims face a greater task than Catholics did. American Muslims are primarily members of cultural, ethnic and racial minorities in addition to being a small religious minority. Muslims also lack a history of civic empowerment and engagement, and therefore need to foster a new model of confident, engaged citizenship in the United States. It is a huge task, he said, one that will require a secular state that allows Muslims to be “Americans on our own terms.” Responding to a final question about the prospects for American Muslims under the presidency of Barack Obama, An-Na’im cautioned listeners: “Obama won’t change things for us. We make the difference that we deserve. Muslims must make ourselves part of the American dream.”

In a robust discussion following his lecture, An-Na’im responded to numerous questions about his conception of the state, theories of post-modernism and post-secularism, civic and public reason and American Muslims’ civic responsibility. The following morning, he graciously sat down with a small group of undergraduate and graduate students to discuss a wide range of topics, from the situations in Darfur (the war-torn region of his native country) and Iraq to the role of Shari’a courts in Western democracies and the possibilities of human rights as a ground for interfaith dialogue.

From beginning to end, Professor An-Na’im’s visit was an extraordinary success, and we thank him for being another stellar speaker in the Boisi Center’s Prophetic Voices lecture series. An audio recording of his lecture is already available on our web site; video will be posted soon, along with a transcript of his lecture and an interview with Erik Owens.