The Challenge of 'Us' in Ecological Times

The Challenge of 'Us' in Ecological Times 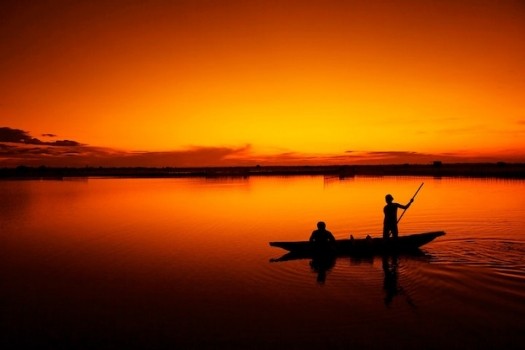 Human beings already find it difficult to expand the boundary of what we mean by “us” so that people who differ by race, religion, sexual orientation, political opinion, and myriad other markers can be included. The problem intensifies when kinship with other species is called for.

Yet nothing less will undermine the overweening assumption of human privilege which is rapidly damaging our planet as a habitat for life. Placing the earth in a religious framework, this lecture explores the basis for kinship in the community of creation. It delineates the ecological conversion needed for us to “feel the desertification of the soil almost as a physical ailment, and the extinction of a species as a painful disfigurement” (Pope Francis, Laudato Si’, 89). Once nature becomes a neighbor, then prayer, preaching, and policy green up. Psalm 67's prayer “may God bless us” expands to include all of us creatures from the Arctic to the Antarctic ends of the earth.

Elizabeth A. Johnson, C.S.J., Distinguished Professor Emerita of Theology at Fordham University in New York City, has authored numerous books and articles, including She Who Is: The Mystery of God in Feminist Theological Discourse, and most recently Creation and the Cross: The Mercy of God for a Planet in Peril. A past president of the Catholic Theological Society of America and also of the American Theological Society, she has served on the editorial boards of major journals and seen her work translated into thirteen languages. Johnson loves to teach and was awarded the Fordham Teaching Award in 1998 and Professor of the Year Award in 2011. She has mentored dozens of doctoral students who are now themselves professors. The recipient of fifteen honorary doctorates and numerous other accolades, she has been deeply involved in the life of the church, including serving on the national U.S. Lutheran-Catholic Dialogue and the Vatican-sponsored dialogue between science and religion. 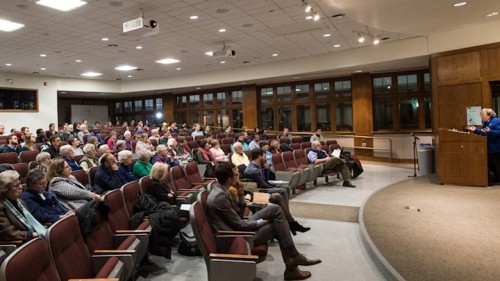 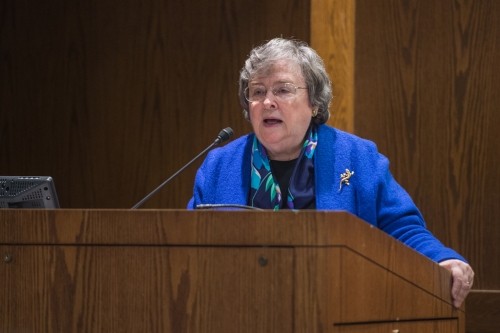 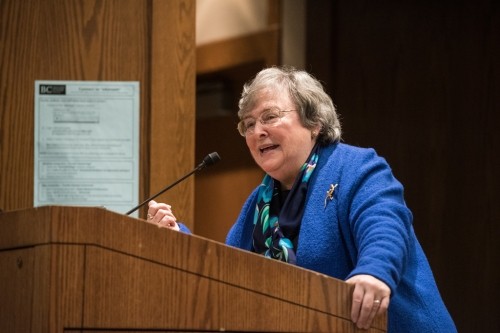 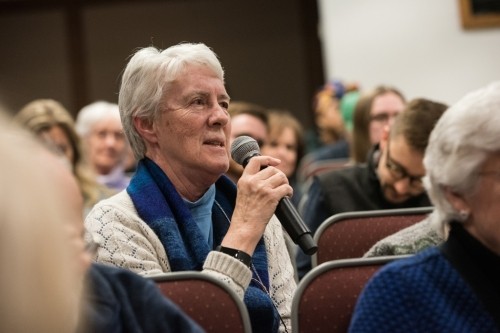 What comes to mind when the pronoun “us” is used in conversation? On February 28th, Elizabeth A. Johnson, C.S.J. asked this question, exposing the assumption that “us” often refers only to the human community. Johnson delivered the Boisi Center’s 18th Annual Prophetic Voices Lecture to an audience of students, professors, and community members on the the topic of anthropocentric theology and its relationship to our current ecological crisis. A distinguished professor emerita of theology at Fordham University and author of, most recently, Ask the Beasts: Darwin and the God of Love (2015) and Creation and the Cross: The Mercy of God for a Planet in Peril (2019), Johnson delivered a lecture that challenged a redefining of “us” to include the entire community of life on earth, expositing the theological reasons behind a call for such a cosmological shift.

Johnson began by discussing how the pronoun “us,” with its common reference to a community comprised solely of people, must change in the face of our current ecological crisis. Relying on language originating in the arguments for the Catholic “preferential option for the poor,” Johnson stated that the expansion of “us” to include all life on earth is, at its core, a theocentric option; it will teach us more about who God is. She unpacked the the reasons behind this revamp of anthropology in three parts.

Johnson first elaborated on the crisis of the natural world. The earth is our “common, shared, and only home.” The increasing rate of species extinctions signals the “death of birth itself.” Johnson relied on Pope Francis’ Laudato si’ as she argued each extinction should feel like a “personal disfigurement.” Changing our understanding of the word “us” to include kinship with other species shifts our view of the world we live in, providing “a new way of being human.”

Johnson then posited theological arguments for the kinship between all species. Challenging the traditional hierarchy of being, she highlighted that all of creation shares one creator, and one end, in God. Encouraged by scripture which emphasizes this kinship, Johnson argues we must “climb down from our perch” and see ourselves as simply members in the community of life. Johnson challenged that we shift our understanding from the common picture of a pyramid of species with humans at the top towards a more accurate image of the circle of life. The Genesis command to “have dominion” can, in this way, be more accurately understood as a call to be a representative for God in his love for all creation.

Diving deeper on previous points, Johnson concluded with the ways we can see direct God-animal relations. She noted that Laudato si’ changed centuries of teaching by stating that animals have a value of their own, not just an instrumental value to humans. She argued, backed by scripture, that we can see a direct relationship between God and all animals, and that animals praise God by their very existence: they cry to God for food, intelligently utilize their environments, and carry out the vocation to multiply and be fruitful. We should see this praise in a critical realist sense, recalling Aquinas’ old adage that things know -- and love -- according to how they are able.

Before closing with a brief Q&A, Johnson ended with one summarizing point: redrafting our sense of identity -- our theological anthropology -- awakens us to our “embeddedness with all creation.” Changing how we think of “us” changes not just our view of the world, but also how we pray and live.

Yale School of Forestry and Environmental Studies. “Religions Of The World And Ecology: Archive Of Conference Materials.” Accessible at https://bit.ly/2NFv0Td

On January 23, 2019, the Pulitzer Center on Crisis Reporting hosted photographer George Steinmetz for a forum at Georgetown University. Joined by American University professor Evan Berry, Steinmetz presented some of his original aerial photography for the project, "Losing Earth," a 2018 report from New York Times Magazine. In it he highlights existing evidence of ecological damage, while also calling for community action. Among the targets of his exhortation were communities of faith, some of which have mobilized in response to global environmental challenges.