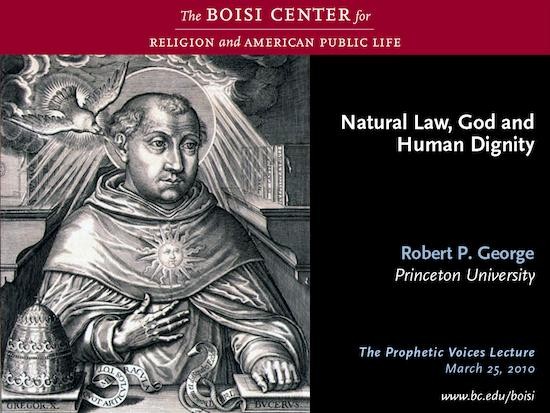 Professor George will argue that there are irreducible aspects of human well-being and fulfillment that can be understood and affirmed on the basis of rational (if ordinarily informal and even casual) reflection on data provided by our experiences of such activities as friendship, knowledge, and aesthetic appreciation. These “basic human goods” are the referents of what Aquinas called the first principles of practical reason and basic precepts of natural law. By attending to the integral directiveness of these principles, it is possible to identify norms of morality distinguishing fully practically reasonable choices (i.e., those compatible with a will towards integral human fulfillment, and thus in line with human dignity) from those that fall short of what reason demands and must, therefore, be judged to be morally deficient. George will consider the skeptical (non-cognitivist) challenge to this understanding of morality advanced by advocates of instrumentalist accounts of practical reason, and he will also explore some significant respects in which his neo-Aristotelian (eudaimonistic) approach to moral judgment is both like and unlike utilitarian and other consequentialist approaches, on the one side, and Kantian or purely “deontological” approaches, on the other. In the course of the lecture, he will address the question of religious faith and revealed moral truth in relation to natural law theory and the place of virtues in a comprehensive account of natural law. 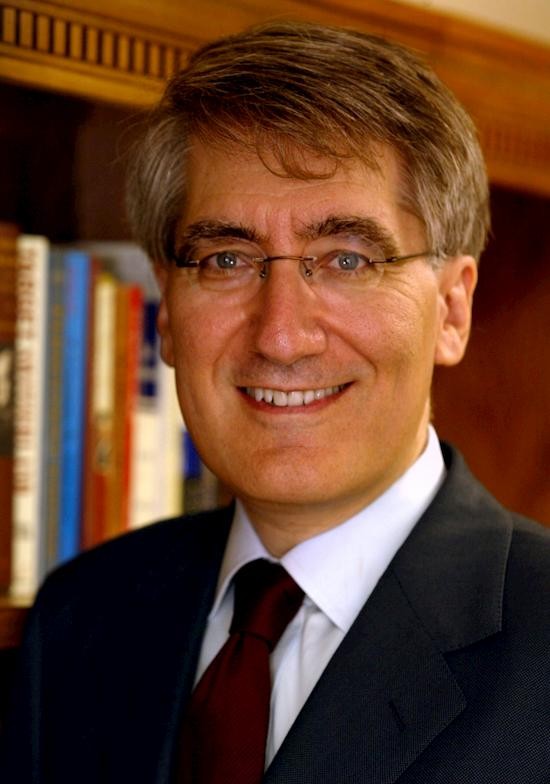 Robert P. George is the McCormick Professor of Jurisprudence and the director of the James Madison Program in American Ideals and Institutions at Princeton University. He received his Ph.D. from Oxford University and his J.D. from Harvard University. George specializes in constitutional law, philosophy of law and political philosophy. He has served on the President’s Council on Bioethics and as a presidential appointee to the U.S. Commission on Civil Rights. He is a former Judicial Fellow at the United States Supreme Court and currently serves on UNESCO’s World Commission on the Ethics of Scientific Knowledge and Technology. He is also a member of the Council on Foreign Relations. George’s writings include In Defense of Natural Law (Oxford University Press, 2001), Making Men Moral: Civil Liberties and Public Morality (Oxford University Press, 1995), and The Clash of Orthodoxies: Law, Religion and Morality in Crisis (Intercollegiate Studies Institute, 2002). George is a recipient of the Presidential Citizens Medal and many other honors, including the Stanley Kelley, Jr. Teaching Award from Princeton's Department of Politics. He was also the 2007 John Dewey Lecturer in Philosophy of Law at Harvard University and the 2008 Judge Guido Calabresi Lecturer at Yale University. 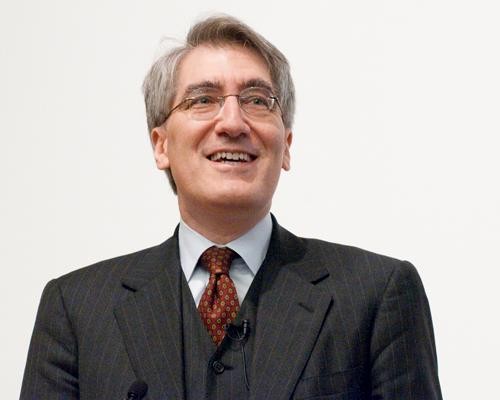 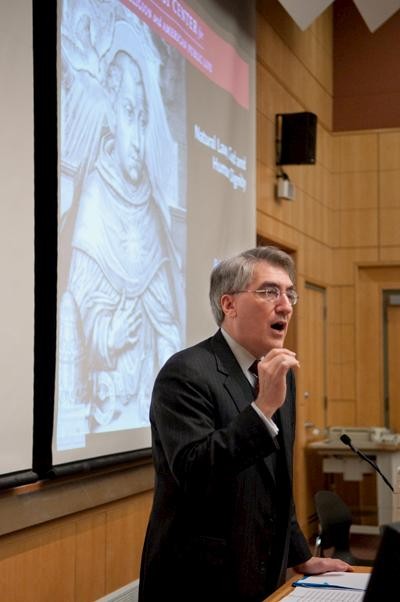 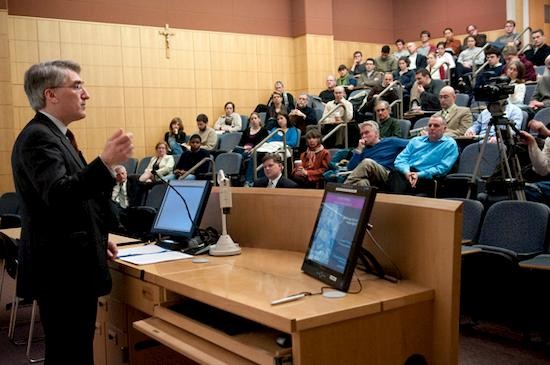 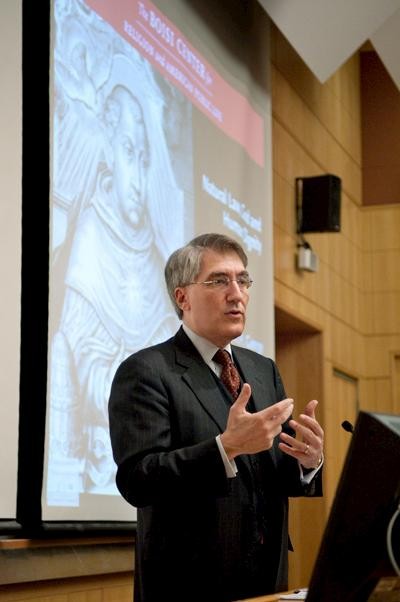 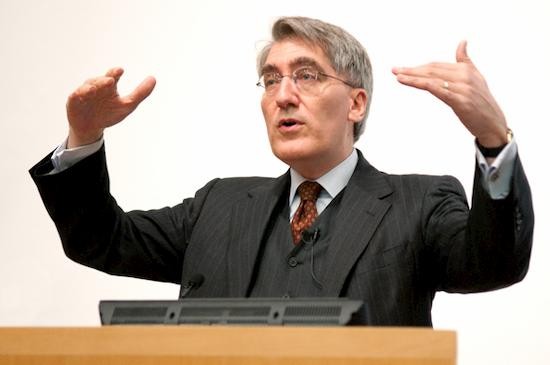 George, the McCormick Professor of Jurisprudence at Princeton University, is a leading scholar in the largely Catholic “new natural law” movement that grounds its understanding of unchangeable moral principles solely on the foundation of practical reason. In other words, we can understand the right thing to do—and indeed the moral principles that make actions right, as well as the “basic goods” that determine the moral principles—by reflecting on the nature of our human capacities and the ways in which we can flourish or languish.

George began his argument with the example of friendship, which he considers an intrinsic, basic human good. Friends act in ways that make sense to us, he said: they give without expectation of receiving, they help one another simply because they are friends and not for future gain. Friendship makes sense to us as humans because we recognize it as a good in itself. We don’t need any other reasons to explain it; our natural capacity for friendship yields a natural understanding of its merits. Conversely, a purely instrumental friendship—one based solely on the likelihood of mutual advancement of individual goals— is not a friendship at all, because it fails to contribute to our well-being as social creatures. When we have true friends, and are true friends to others, we flourish as human beings.

Like friendship, health and the pursuit of intellectual knowledge (in any field of thought) are basic human goods, George argued. We can flourish or languish depending on our actions with respect to any of these intrinsic goods. Among the implications of this argument is that there are numerous basic goods that we should pursue, and that they sometimes come into conflict. This means that “the human good is variegated,” not singular. Natural law, George said, helps us to choose among competing moral claims in ways that move us closer to “integral human fulfillment,” to a balance of human goods that fulfills our human capacity to flourish physically, morally and intellectually.

After explaining his conception of natural law at some length, George discussed its merits over competing ethical theories—primarily those like utilitarianism that focus on consequences rather than intrinsic values—and spoke in broad terms about the moral implications of his position. The “master moral principle” that natural law highlights is a familiar one, George argued, for it is expressed in such norms as the Golden Rule (do unto others as you would have them do unto you), the Pauline Principle (don’t do evil even if good might come of it) and Immanuel Kant’s principle of humanity (treat humanity, whether in the person of yourself or another, always as an end and never as a means only). Using these broad moral principles, we can then derive more specific moral norms that apply to particular cases like adultery or lying in specific situations.

George ended his lecture with remarks on human rights as moral principles. With a nod to Harvard law professor and former Ambassador to the Vatican Mary Ann Glendon (who was present at the lecture), George argued that while rights language is sometimes employed in inappropriate contexts, it is ultimately a “useful, supple way of conceiving and expressing the moral principle that guides our action conclusively away from” choices that might otherwise be understood as acceptable. There are other ways to argue for the intrinsic value of human life, including “the straightforward language of justice,” he said, but human rights offers a particularly powerful and important form of argument. On this point, the audience was in complete agreement.

The Clash of Orthodoxies: Law, Religion and Morality in Crisis (ISI Books, 2001) by Robert P. George.

"Our Struggle for the Soul of Our Nation," Robert P. George, Public Discourse

Nation for Marriage Home Page
A non-profit organization that opposes the legal recognition of same-sex marriages founded by Robert P. George, who also serves as Chairman of the Board.