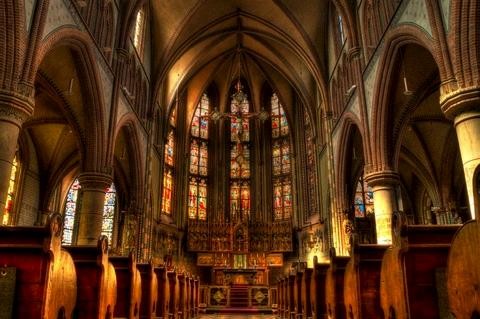 Throughout the ages, humans have employed political power in the quest for religious meaning in life. In this talk, Professor Polke draws upon the revolutionary religious developments of the axial age--an era spanning the lives and religious movements inspired by Socrates, Sidhartha Gautama (the Buddha) and Confucius, among many others--to understand key models of social and political thought that continue to shape our understanding of political and religious diversity today.

Christian Polke is a post-doctoral research assistant in theology department at the University of Hamburg whose research focuses on political and legal ethics and the impact of theology on public life. A recipient of the John F. Templeton Award for Theological Promise in 2010, he is completing a manuscript entitled "Expressive Theism: Reconsidering the Question of a Personal God." His dissertation, Religious Neutrality of the Modern State: A Study in Political Ethics, was published in 2009. Polke has studied Protestant theology, philosophy and law in Berlin, Heidelberg, and Tübingen. He received his Ph.D. from Heidelberg University. 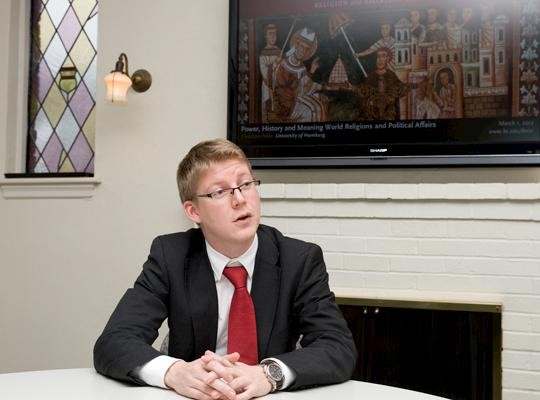 Christian Polke, University of Hamburg, speaking at the Boisi Center on March 1, 2012. 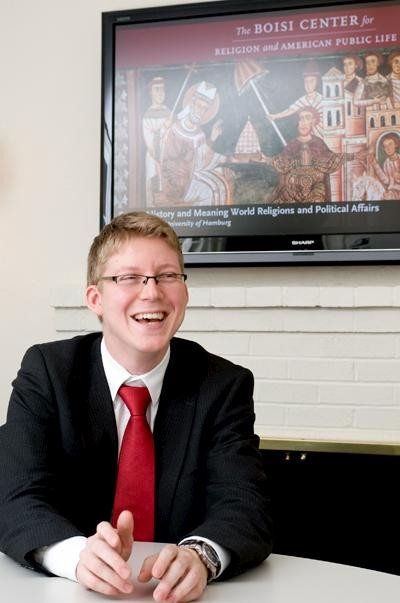 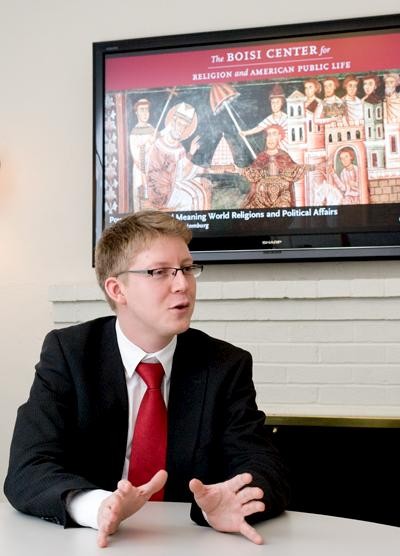 At a March 1 lunch colloquium at the Boisi Center, theologian Christian Polke of Hamburg University discussed the use of political power in the quest for religious meaning. Drawing upon comparative cultural theories to understand the revolutionary religious developments of the axial age—an era spanning the lives and religious movements inspired by Socrates, Sidhartha Gautama (the Buddha) and Confucius, among many others—Polke argued that early models of social and political thought continue to shape our understanding of political and religious diversity today.

Jaspers, Karl. The Origin and Goal of History. (Yale University Press, 1953). Karl Jaspers, the originator of the term axial age, discusses the philosophy of the history of mankind.

Armstrong, Karen. The Great Transformation: The Beginning of Our Religious Traditions. (Knopf/Random House, 2006). A discussion of the chronological development of the axial age, examining the contributions of the leading figures.

Eisenstadt, Shmuel. The Axial Age: The Emergence of Transcendental Visions and the Rise of Clerics. (European Journal of Sociology, 1982). Eisenstadt examines a series of intellectual and institutional revolutions took place related to the axial age. He posits that these revolutions all dealt with the emergence, conceptualization, and institutionalization of a basic tension between the transcendental and mundane orders.

Vidal, Gore. Creation. (Random House, 2002). A novel of politics, war, philosophy, and adventure in which the main character encounters some of the primary thinkers of the axial age.

Lambert, Yves. Religion in Modernity after the Axial Age. (Oxford University Press, 1999). An article proposing a general model of analysis of the relations between religion and modernity where modernity is posited as a new axial age.

Rick Santorum recently declared his disagreement with another Catholic presidential candidate, John F. Kennedy. In contrast to Kennedy, Santorum doesn't "believe in an America where the separation of church and state is absolute.”