Bible Nation: Hobby Lobby, Scripture, and the Making of America

Bible Nation: Hobby Lobby, Scripture, and the Making of America 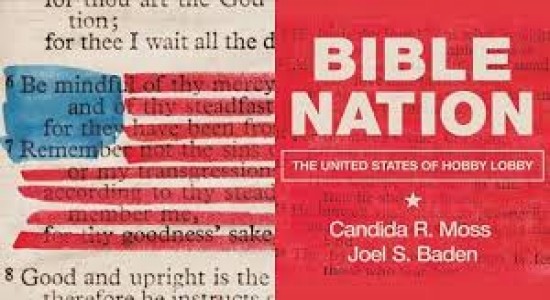 The Inaugural Wolfe Lecture on Religion and American Politics

In 2014 the Green Family, the owners of Hobby Lobby, Inc, burst into public consciousness with their controversial lawsuit Burwell v. Hobby Lobby. The Green family cast themselves as family business owners reluctantly drawn into litigation by the overreach of a bloated federal government. This may be true, but their involvement in American politics and culture making preceded the lawsuit. Since 2009 the Greens had been collecting Biblical artifacts. Eventually those artifacts would find their way into the recently opened, Green-sponsored Museum of the Bible in DC. The Museum, the public face of the family’s evangelical project, is part of a larger effort to return America to her perceived Christian roots. This lecture explores the Green family’s motivations, their involvement in public life, and the scope of their influence.

Candida R. Moss is the Cadbury Professor of Theology at the University of Birmingham. She is an award-winning author or editor of seven books and over thirty academic articles and essays including Ancient Christian Martyrdom (Yale University Press), Reconceiving Infertility: Biblical Perspectives on Procreation and Childlessness (Princeton), and Bible Nation: The United States of Hobby Lobby (Princeton). She has served as a papal news contributor for CBS News; appeared in documentaries for CNN, NBC, National Geographic, History Channel, and Smithsonian; is a columnist for The Daily Beast; and has written for The New York Times, The Atlantic Monthly, The Washington Post, The LA Times and Politico. 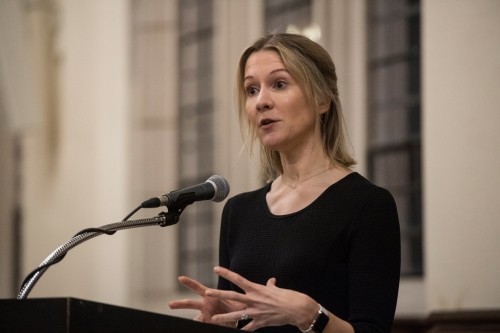 Candida Moss, Cadbury Professor of Theology at the University of Birmingham, discusses her recent book, Bible Nation: Hobby Lobby, Scripture, and the Making of America at the Inaugural Wolfe Lecture on Religion and American Politics. 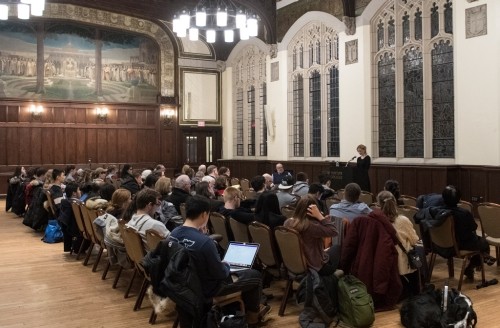 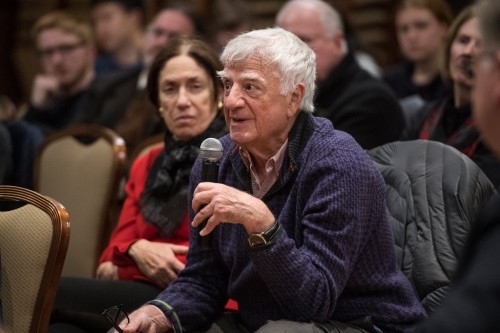 Alan Wolfe, founding director of the Boisi Center for Religion and American Public Life, contributes to the audience discussion following the talk. 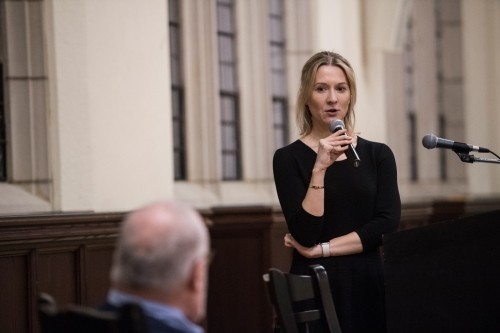 The Boisi Center welcomed Professor Candida Moss, Cadbury Professor of Theology at the University of Birmingham in the United Kingdom to Boston College. On February 7, 2018, Professor Moss gave the Inaugural Wolfe Lecture on Religion and American Politics, named for Professor Alan Wolfe, founding director of the Boisi Center. Professor Moss discussed her recent publication, Bible Nation: Hobby Lobby, Scripture, and the Making of America, and offered a brief history of the Green family, a prominent Protestant Evangelical family that owns the chain of Hobby Lobby craft stores and funded the recently-opened Museum of the Bible in Washington DC.  The Green family entered the public eye as a result of their central role in the Supreme Court Case Burwell v. Hobby Lobby case.

Moss discussed the Museum of the Bible and argued that the Green family’s actions are not consistent with their public persona as messengers of Christianity.  She also critiqued the Museum’s methods of acquiring artifacts and its approach to academic scholarship surrounding the Bible.  Moss discussed the importance of maintaining a consistent methodology in examining the Bible and its application in society.  Recounting her visit to the Museum of the Bible, Moss highlighted the Green family’s specific motivations for building this museum.  For example, she described the exhibit that presents the Bible’s significance in history but noted that the timeline in the museum ends with the Protestant Reformation and disregards the significance of the Bible since that point.  She also pointed out that the Museum of the Bible disregards the application and significance of the Bible in other world religions, including Judaism, Islam, as well as other denominations of Christianity such as Catholicism and Mormonism.  Moss noted that when the Museum discusses the use of the Bible in history, it casually addresses some problematic ways that the Bible has been applied.  For example, the Museum includes but skates over the Bible’s role in justifying slavery.

In her critique of the Green family and the discussion of her book, Moss uncovers the influence a family such as the Green family can have in the United States.  This influence spans numerous spheres of life, including education, politics, and even the way we understand other cultures and religions based on how they are presented in museums such as the Museum of the Bible.  Moss’ lecture highlights the need for critical scholarship in an age where biases can influence the development of our own worldviews and prevent us from engaging in critical discussion and thought about the role of religion in American and global society.

Malone, Matt, S.J. “The Museum of the Bible is ultimately a leap of faith.” America: The Jesuit Review, October 20, 2017, https://www.americamagazine.org/faith/2017/10/20/museum-bible-ultimately-leap-faith

“Controversial Bible Museum Opens in Washington, D.C.” Radio segment on WBUR features an introduction to the Museum of the Bible, November 17, 2017, http://www.wbur.org/hereandnow/2017/11/17/museum-of-the-bible

Both Emma Green and Candida Moss published articles in The Atlantic about the Museum of the Bible, recently opened in Washington D.C. Green's article, published in November 2017, details how the museum incorporates the Bible into America's political history. Moss, in her January 2016 feature story, written alongside Joel Baden, details the efforts by the Hobby Lobby family to acquire Biblical antiquities.