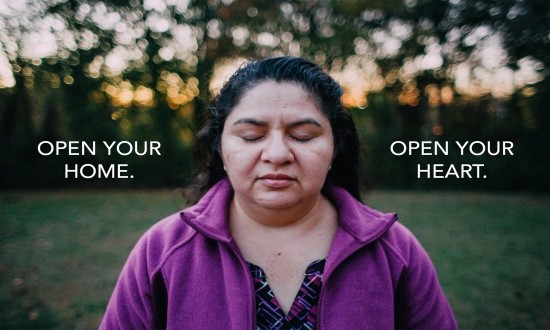 After 24 years of living and working in the US, Guatemalan grandmother Juana Luz Tobar Ortega is facing deportation. Frightened of returning to Guatemala and leaving her husband, four children and two grandchildren behind, Juana enters sanctuary at an unfamiliar church in Greensboro, North Carolina. In sanctuary, Immigrations and Customs Enforcement (ICE) cannot come in, but Juana cannot leave to work or be at home with her family. As time passes, and state lawmakers continue to ignore the family's pleas for a stay on her deportation, Juana's spirits slowly sink. Yet, she leans into her faith. Juana is patient that in God's house, God will answer her prayers. In this complicated immigration landscape, communities can be divided, or communities can be brought together under extraordinary circumstances. Santuario is a documentary short about radical faith, one family's fight to stay together, and the true meaning of church in today's immigration climate.

Join us for a screening of the 26-minute documentary and discussion based on lessons from the field with Erick Berrelleza, S.J.

Erick Berrelleza, S.J., is a Ph.D. candidate in sociology at Boston University. His research interests lie primarily in the sociology of religion and urban sociology. His current work focuses on lived religion and place. 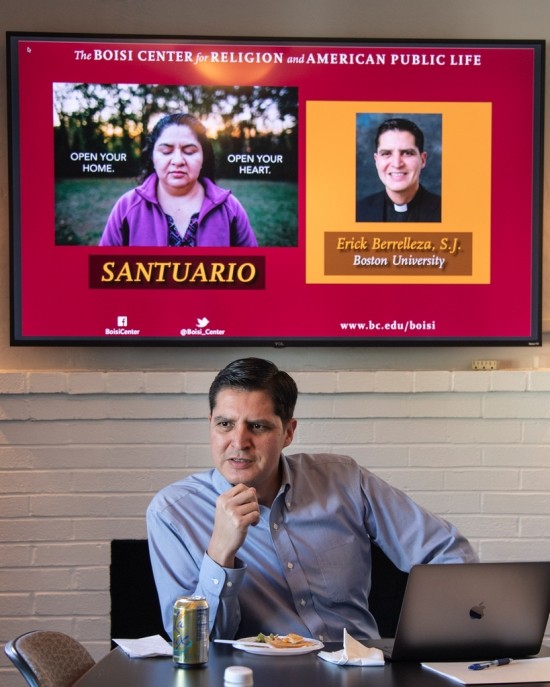 Fr. Erick Berrelleza spoke to a group at the Boisi Center after screening the short documentary, "Santuario." 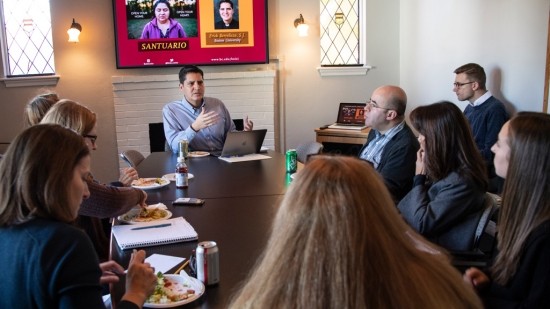 Erick Berrelleza, S.J. presented a glimpse into his latest research, an ethnographic study on immigrants’ lived religious experiences. He explained his long-time fascination with the idea of “sanctuary” as a physical entity—an idea that has existed since the Middle Ages. Now, since 2007, a new iteration of sanctuary has emerged in response to undocumented immigration in the United States: churches around the country offering support and protection to undocumented immigrants at risk of deportation.

Today, there are forty-six immigrants housed in churches nationwide, though many more religious groups have offered their facilities and resources as sanctuary, Berrelleza explained. Being granted sanctuary requires the person seeking it to have an active case against Immigration and Customs Enforcement (ICE) to remain in the United States—there have been, however, drastically few successful cases, in which the immigrant and the church were able to overturn ICE’s earlier deportation order.

For Berrelleza, this new iteration of physical sanctuary raises interesting questions about these immigrants’ lived religious experiences while in sanctuary. Specifically, his research explores three main questions. The first entails the contours of religion for a sanctuary resident: how are they interacting with their space in a religious sense? The second asks how the experience of dwelling in a church influences the practices and beliefs of the resident. And the third analyzes the relationship of the residents to this new sanctuary movement itself: how active a role do they tend to take in broader activism?

Berrelleza supplemented his lecture with the short documentary, Santuario, which follows Guatemalan native Juana for two years while living in sanctuary at St. Barnabas Episcopal Church in North Carolina. Santuario offers the viewer a window into the complicated questions of the sanctuary movement which Berrelleza seeks to answer in his research. Juana, despite being Pentecostal, finds living in the Episcopal church “enlightening.” The language difference between her and the congregation did not constitute a barrier, and Juana was able to connect with her faith even in this unfamiliar space, which serve as both her home and her place of worship.

Many sanctuary residents found themselves housed in atmospheres of religious expression; some more conservative, some more progressive. While uncomfortable at first for some—another sanctuary resident Rosa reported being shocked by the church’s decision to perform same-sex marriages, for example—the differences did not hinder the resident’s own Christian practice or belief. Instead, Berrelleza explained that with the prolonged time and consistent interaction with the host congregations, residents reported experiencing a broader view of their religious faith.

Finally, Berrelleza discussed the distinct ways sanctuary residents interact with the broader movement. Some serve as symbols of the movement, while others opt to take more active roles. Juana, for example, is shown taking a moderately active role, connecting with others housed in sanctuary congregations and agreeing to be filmed in the documentary, while another sanctuary resident participates in press conferences and other forms of her own activism. Juana, however, remains in sanctuary even to this day as ICE’s order is as of yet unchanged. This unveils any misunderstanding of the movement as facilitating rapid change—the reality is significantly slower. Due to that and other important factors, sanctuary residents themselves must gauge the level of activity they desire in the overarching movement.

In the conversation that followed Berrelleza’s lecture, the attendees discussed the lack of sanctuary activity from Catholic churches—the players are, overwhelmingly, Protestant churches.

Berrelleza emphasized the sometimes confusing legal implications of the movement—often, churches need to overcome hesitation and discomfort towards the movement. Churches face a choice between serving individual people and serving the government of their country. While some laws are unjust, the path of action is frequently unclear. The sanctuary movement, however, has changed the religious experiences of immigrants and congregations across the United States.