Perfect Storm: How the Imminent Crisis in Higher Education Can Strengthen Liberal Education

Perfect Storm: How the Imminent Crisis in Higher Education Can Strengthen Liberal Education

Three developments threaten American higher education with a perfect storm: First, the ongoing problems in the economy; second, a citizenry that demands visible results; and third, a theory of educational improvement that has reached its limits and is no longer sustainable.

In his lecture, Dr. Connor will address problems with the existing theory of educational improvement. He will also explore an alternative theory, based on systematic use of evidence of how best to improve student learning and to control costs. This alternative, Dr. Connor will argue, is the best course for higher education in general. Provided that faculty move swiftly to take ownership of this approach, it promises special, and often overlooked, benefits for liberal education, especially in the humanities and related social science. 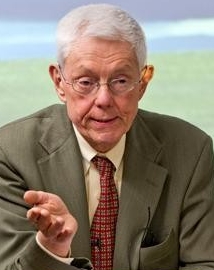 W. Robert Connor is Senior Advisor to the President of the Teagle Foundation and was the Foundation's President from 2003 to 2009. Connor was born in Worcester Massachusetts, graduated from Hamilton College, and after a stint at Oxford received his Ph.D in Classics from Princeton in 1961. A few years later, he returned to Princeton, where he taught and administered until 1989, when he became president and director of the National Humanities Center in the Research Triangle Park of North Carolina. He lives in Hillsborough, North Carolina with his Byzantinist wife, Carolyn Connor, and their Labrador, Cree. He holds honorary degrees from several colleges and is a fellow of the American Academy of Arts and Sciences and the American Philosophical Society. 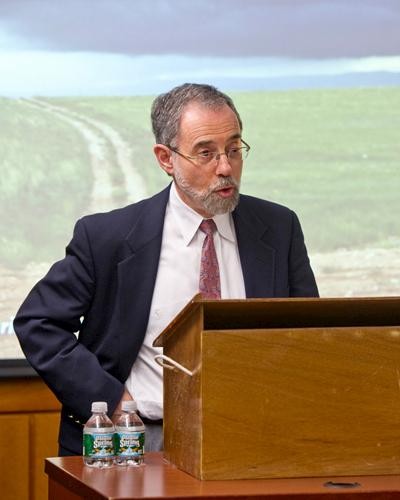 Dr. Henry Braun of the BC Center for the Study of Testing, Evaluation, and Educational Policy (CSTEEP) introducing Dr. Robert Connor on April 5th, 2011. 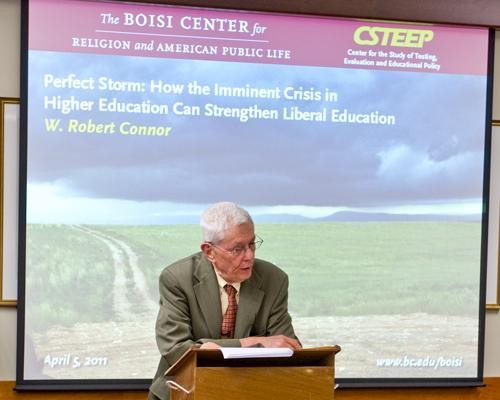 Dr. Robert Connor, past president of the Teagle Foundation and the National Humanities Center. The event was sponsored by the Boisi Center and the Center for the Study of Testing, Evaluation, and Educational Policy (CSTEEP). 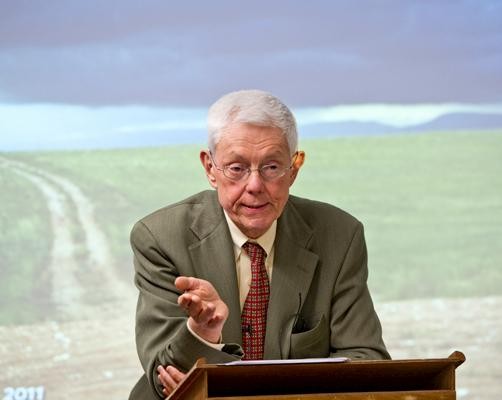 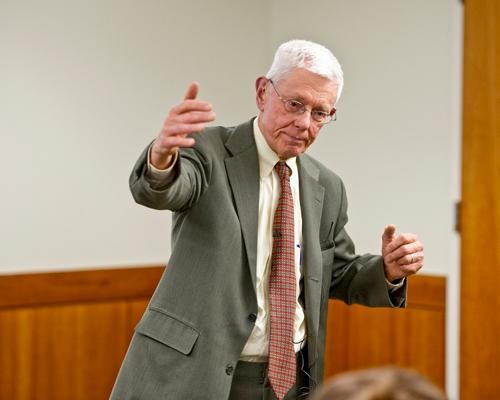 Higher education today faces a perfect storm of three mutually reinforcing crises: economic uncertainty, a demand for quantifiable results and a failed theory of educational improvement. This was the sobering message delivered in an April 5 lecture by W. Robert Connor, past president of the Teagle Foundation and former professor of classics at Princeton and Duke universities. Unless faculty, administrators and students alike make needed reforms, Connor warned, higher education will find itself increasingly subject to reforms from legislators and policymakers outside the academy. By revamping the current theory of educational improvement based on research about what works, he argued, we can not only strengthen higher education, but also strengthen the case for liberal education. Held at the Lynch School of Education at BC, the lecture was co-sponsored by the school’s Center for the Study of Testing, Evaluation and Educational Policy.

The three crises Connor described are familiar to most people connected to higher education. First, most Americans today face some level of economic uncertainty thanks to a major recession that lowered average household income and put millions of people out of work. But the recession has merely added salt to an already gaping economic wound for college graduates: outsourcing and competition for white-collar jobs means that a college degree no longer guarantees a well-paying job. At the same time, the tuition required to earn a degree has been rising for more than two decades at rates well above inflation.

This disjunction, along with austere state budgets, has led to the second “crisis” Connor cited: an increasing demand for quantifiable results of higher education. An influential book entitled Academically Adrift recently reported that over a third of American students at four-year colleges and universities failed to improve their critical reasoning or real-world problem-solving skills (assessed by the Collegiate Learning Assessment) in a statistically significant way between their freshman and senior years. It’s no surprise, Connor said, that parents and students alike demand evidence of returns on their huge investment in education.

Efforts to improve education—and to prove it with data—reflect the third crisis Connor described: an unsustainable reform policy. Conventional wisdom in higher educational reform calls for smaller class sizes, more specialized fields of expertise, and more faculty research time to develop that specialization—and each of these changes have important benefits. But they are also all very costly, and it is not at all clear that their cost outweighs the marginal benefits they produce. We need a new alternative, Connor said.

The good news is that recent research can tell us a lot about what works in higher education, Connor noted. Studies show that the greatest gains in critical thinking occur in foreign languages, sociology, and interdisciplinary studies—areas in which students are forced to consider alternative views of reality and thus think critically about their own views. Data also shows that top students improved critical thinking skills most when professors engaged fully as teachers and mentors, providing prompt feedback on student work, engaging in high-quality interactions outside of classroom (which signal care for the student as a learner), fostering challenging academic environments with high expectations and allowing for diverse views about how life ought to be lived. Extracurricular programs such as internships, research and community service also lead to higher retention and graduation rates, not least among minorities.

One thing is clear, Connor concluded: the path to reform requires everyone involved in higher education—students, faculty, and administrators—to ask what students ought to get out of their education, and to take responsibility for the answer.

"The Future of the American University," The Modern University: Its Present Status and Future Prospects (Papers from the Sixth Kenan Convocation, April 22-24, 1993).

"Why We Need Independent Centers for Advanced Study," The Chronicle Review (January 17, 2003).

This article discusses the lecture of Stanley Aronowitz, author and professor of sociology and urban education at the City University of New York's graduate center, who argues that, "in order to foster creative, innovative-minded workers, institutions of higher learning need to enforce four pillars of education - literature, history, philosophy and biology."

In this interview, Cote and Allahar discuss their new book, Lowering Higher Education: The Rise of Corporate Universities and the Fall of Liberal Education, which urges colleges to asses "whether these trends result in the sacrifice of important academic values."

Recent research has found that 45% of students show "no significant improvement in the key measures of critical thinking, complex reasoning and writing by the end of their sophomore years" ("45% Of Students Don't Learn Much In College" Huffington Post, 01/18/11).