Terrorism and the Boston Marathon: Fear, Hope and Resilience

Terrorism and the Boston Marathon: Fear, Hope and Resilience

Peter Krause will discuss the causes and effects of terrorism in general and the 2013 Boston Marathon attacks in particular. He will present findings from his own research on the role of education, emotion, and community resilience in the difficult choices faced by societies in the aftermath of terrorist attacks. 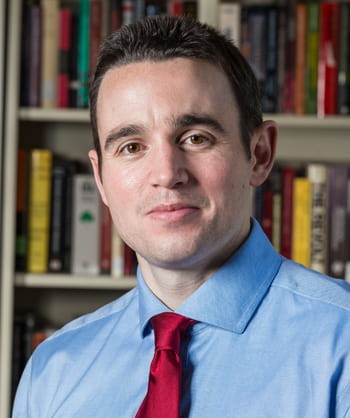 Peter Krause is an assistant professor in the Political Science Department at Boston College. His research and writing focuses on international security, Middle East politics, political violence, and national movements. He is currently completing his book manuscript on the political effectiveness of national movements, as well as articles on the impact of education on attitudes about terrorism and counterterrorism. He has previously published articles on the effectiveness of national movements and political violence, U.S. intervention in the Syrian civil war, the politics of division within the Palestinian national movement, the war of ideas in the Middle East, and a reassessment of U.S. operations at Tora Bora in 2001. Krause has conducted extensive fieldwork throughout the Middle East over the past five years. He is a research affiliate with the MIT Security Studies Program. Before joining the faculty at Boston College, Krause was a research fellow at the Crown Center for Middle East Studies of Brandeis University, as well as a research fellow at the Belfer Center for Science and International Affairs of the Harvard Kennedy School. Krause has offered his analysis of Middle East politics, political violence, and the Boston Marathon attacks with national and local media, including CNN, MSNBC, NECN, and the Boston affiliates of Fox, NBC, ABC, and CBS. 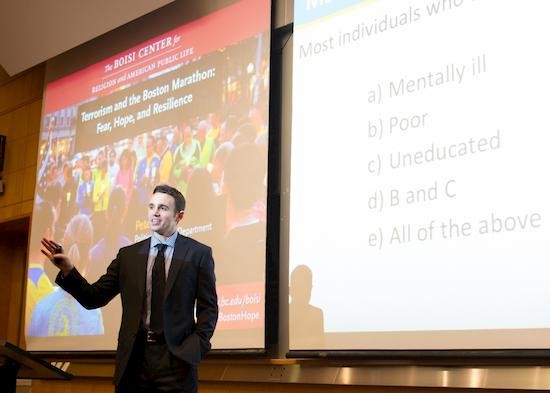 Peter Krause, an assistant professor in Political Science at Boston College, speaks about terrorism and the Boston Marathon bombings. 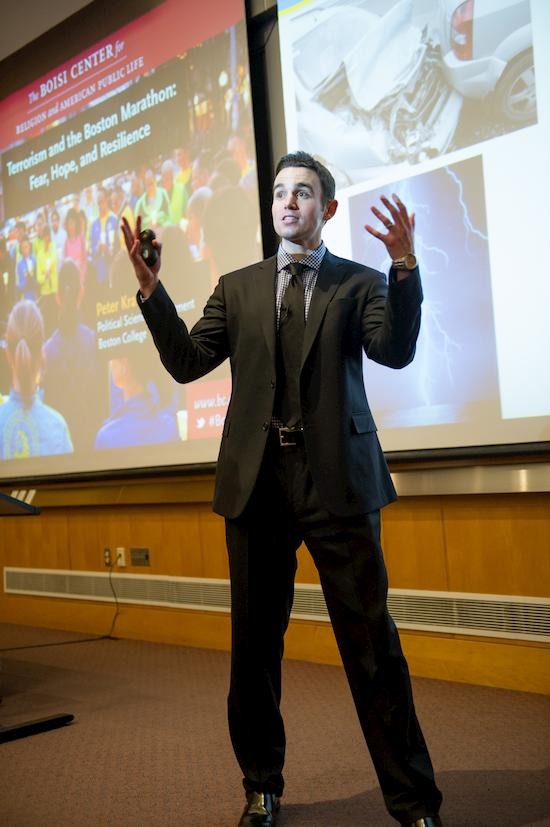 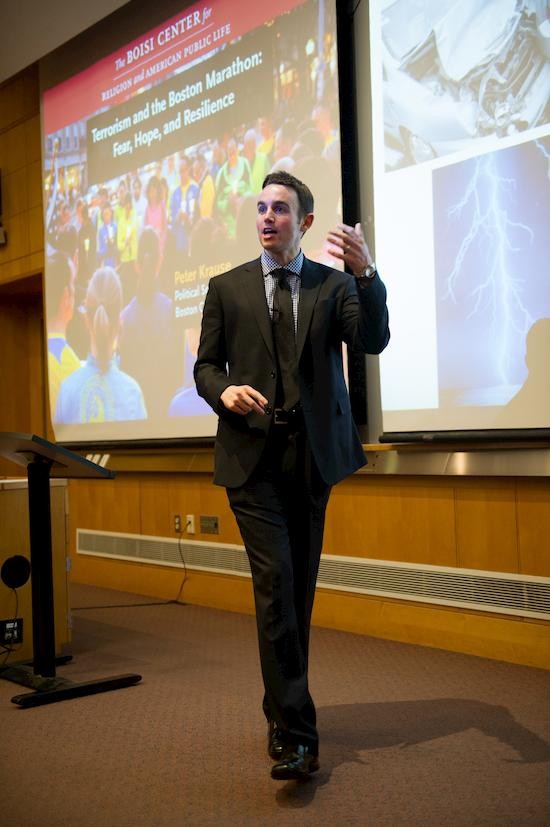 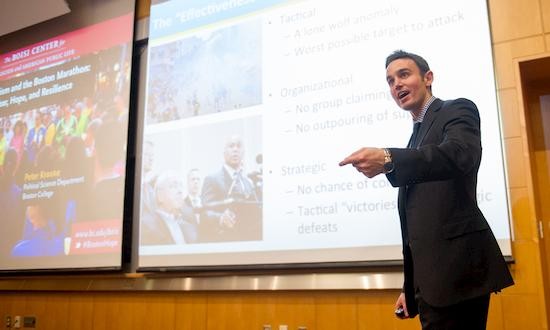 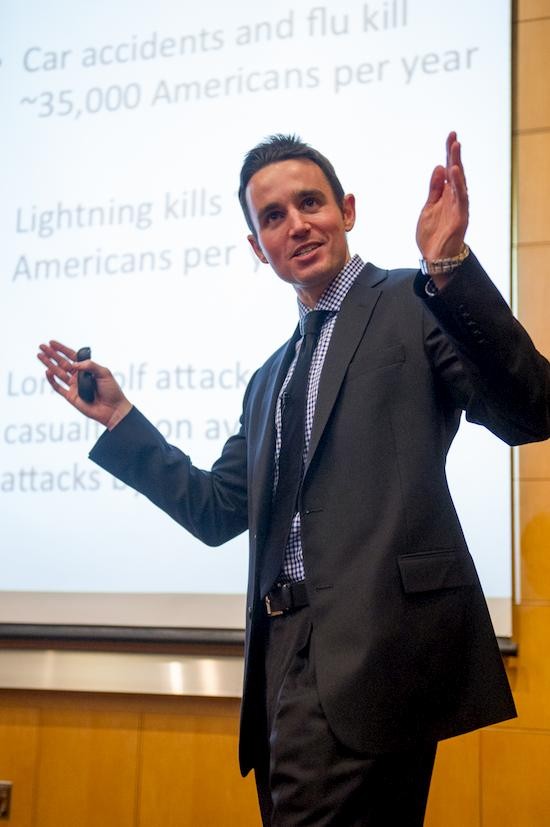 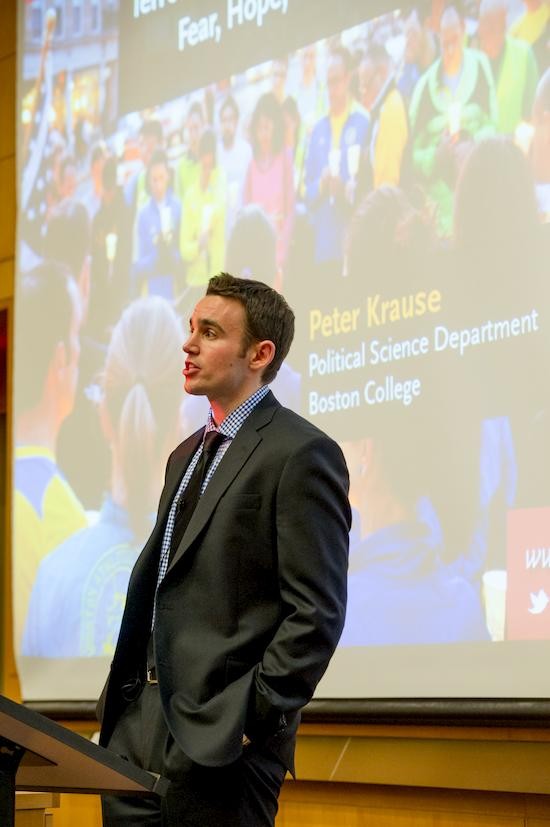 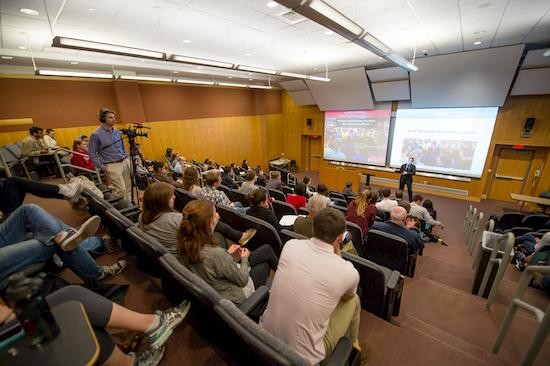 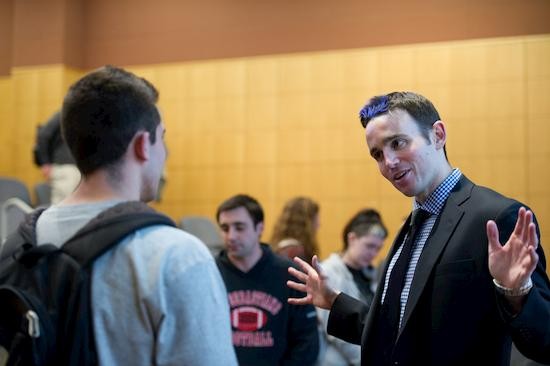 Professor Krause in conversation with students after his talk 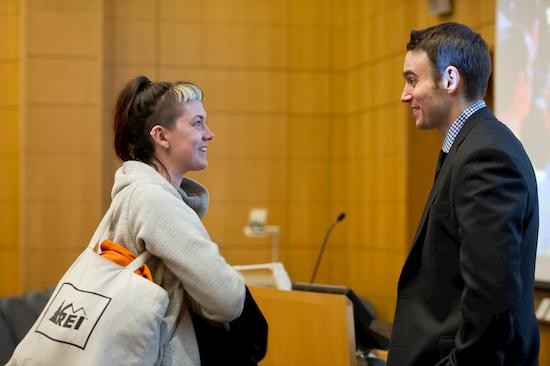 On April 15, 2013, two bombs exploded at the finish line of the Boston Marathon, killing three spectators and injuring nearly 265 others. In reaction, Boston College political science professor Peter Krause wrote a stirring letter to the The Heights urging the BC community to respond with resilience and solidarity.

On the anniversary of the bombings, the Boisi Center invited Krause to expand upon his call to hope and resilience, drawing upon his scholarly expertise in political violence and security. He spoke to a packed audience in Higgins Hall on the evening of April 8.

Krause began by noting that terrorism seeks to inspire fear through apparently indiscriminate violence. But we shouldn’t overstate the threat inside the U.S., where more people have been killed by lightning strikes since 2002 than terrorists. Most domestic terror attacks have come from “lone wolf” actors, not global organizations like al-Qaeda, and they have not forced significant political concessions. The Boston Marathon bombing, Krause argued, was a particular failure because it neither changed American foreign policy nor ruined the beloved event. Quite the opposite: the marathon will now be run every year as a symbol of resilience and hope.

Indeed, resilience counteracts the fear that terrorism seeks to instill. Community cohesion prevents alienation and reduces the root causes of terrorism by building social bonds that we can draw upon as we cope with trauma or debate how to enact sounder security policies. From the heroic reactions of first responders to the inspiring stories of survivors like BC alumna Brittany Loring, Boston exhibited impressive resilience in the wake of last year’s bombings.

Krause encouraged the audience to continue building hope and resilience by serving the communtiy, meeting new neighbors and friends, learning more about terrorism and foreign policy, and remembering the names of the bombing victims. Making good on his 2013 promise, Krause successfully completed the 2014 marathon less than two weeks later.

Peter Krause, "The Political Effectiveness of Non-State Violence: At Two-Level Framework to Transform a Deceptive Debate," Security Studies, Vol. 22, No. 2 (2013).

News Articles and Other Sources

Peter Krause, "LTE: BC Should Respond to Attacks with Renewed Community Spirit," The Heights, Apr. 15, 2013.

Reactions and Responses from Boston College

In the lead up to the 118th Boston Marathon, law enforcement plans for extra security as groups and towns along the route plan special events to make this year a celebration.