Writers Save: How Poets and Novelists Came to Comfort the Faithful and Strengthen the Doubters

Writers Save: How Poets and Novelists Came to Comfort the Faithful and Strengthen the Doubters 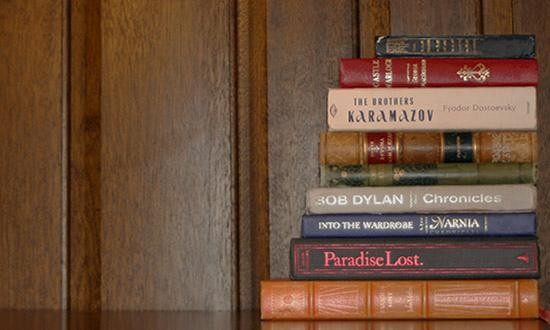 It is not uncommon for modern American Christians to say, with real warmth and deep gratitude, that they owe their faith to literary writers. C. S. Lewis, J. R. R. Tolkien, Flannery O'Connor, Walker Percy, Frederick Buechner, T. S. Eliot, Fyodor Dostoevsky, Gerard Manley Hopkins, even John Donne and George Herbert — these writers have been spiritual anchors for many Christians left utterly cold by pastors and theologians. But this is a relatively recent phenomenon: it is hard to find examples of it before the middle of the 20th century. How did this state of affairs arise? What does its existence suggest about the condition of American religious belief and the role of literature in sustaining it? And, is this good or bad news for Christianity? 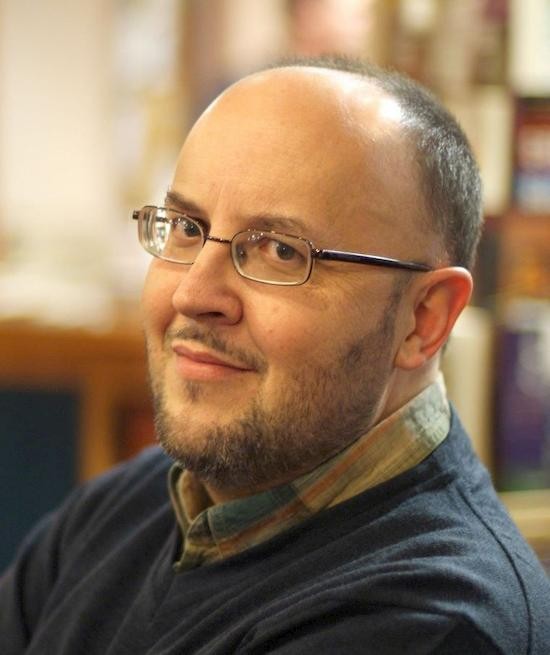 Alan Jacobs is the Clyde S. Kilby Chair Professor of English at Wheaton College in Illinois where he has taught since 1984. His teaching and scholarly interests include Modern British and British Commonwealth literature, hermeneutics, literary theory and the history of criticism, as well as Christian theology and literature. He is the author of A Theology of Reading: The Hermeneutics of Love (2001), The Narnian: The Life and Imagination of C.S. Lewis (2008), Original Sin: A Cultural History (2009), and most recently, The Pleasures of Reading in an Age of Distraction (2011). Jacobs attended the University of Alabama as an undergraduate and received his doctorate in English from the University of Virginia. 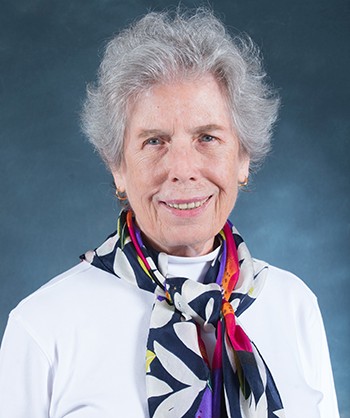 Judith Wilt is Professor Emerita of English at Boston College. She was a founding member of the Women's Studies Program, chair of the English Department from 1990-1996, and became the Newton College Alumnae Chair in Western Culture in 2002. Her current writing project is on women novelists and the heroes they create. 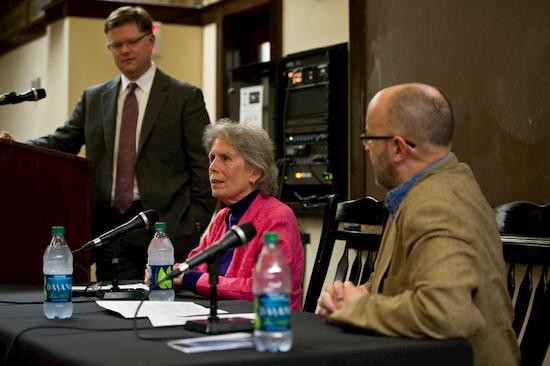 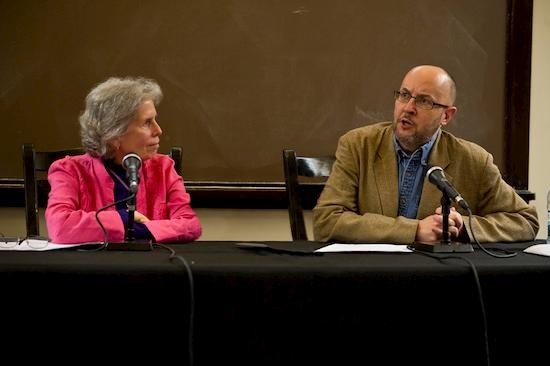 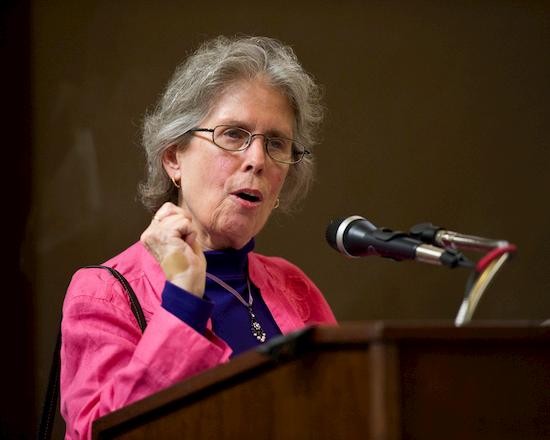 On November 16, Wheaton College English Professor Alan Jacobs delivered a lecture on the role that Western poets and novelists have had in shaping the faith of modern American Christians. Virtually absent until the middle of the twentieth century, this phenomenon emerged as individuals left cold by pastors, theologians, and lifeless liturgies sought a different kind of religious experience. While Jacobs regards the phenomenon as a positive thing for the future of Christianity, he notes that local churches need to think in constructive and creative ways about how to ease the transition of individuals who come to worshipping communities as the result of a literary experience.

Jacobs first took notice of the phenomenon during Fredrick Buechner’s visit to Calvin College in Grand Rapids, Michigan. Jacobs was surprised to hear so many of Buechner’s fans tell the author, “I’m a Christian because of your books.” Recognizing this statement of faith as historically uncommon, he began searching for its origin, eventually tracing it to Fyodor Dostoyevsky, a writer whose prophetic witness was not contingent on his membership with the Church. The phenomenon evolved throughout the 20th century and flourished in the work of Simone Weil, C.S. Lewis and William Hale White. These and others whose diverse spiritual lives were inspired by literature (and who in turn inspired the spiritual lives of others) demonstrate, Jacobs argued, the modern desire to receive spiritual instruction indirectly (without being told we’re receiving it), and to embrace a religious experience without feeling vulnerable.

In a brief response to Jacob’s lecture, BC English Professor Judith Wilt argued that historical novels, science fiction, and detective stories are three additional genres of literature that sustain faith for many, including herself. Jacobs agreed, noting that these genres have great power because they give the least impression that they’re working on us in any spiritual or religious way. Their engaging conversation was quickly joined by members of the audience, who shared their own stories of spiritual engagement with literature, to the benefit of all.

Jacobs, Alan. 2008. The Narnian: The Life and Imagination of C.S. Lewis.
HarperOne. Jacobs provides insight into the events and people responsible for shaping the philosophy of one of the world’s most influential religious writers.

Jacobs, Alan. 2008. Original Sin: A Cultural History. HarperOne. Jacobs follows the concept of original sin from its Biblical origins to the modern day, prodding at a still much-contested question: are humans really “bad to the bone?”

Jacobs, Alan. “Come On, You Call This a Manifesto," WSJ. 9 May 2008. Jacobs criticizes a 2008 document intended to both define and promote the modern evangelical movement: The Evangelical Manifesto. Though it boasts the word manifesto in its title, this long and moderate statement spends far more time making an appeal not to confuse evangelism with fundamentalism than it does affirming the independent worth of the faith.

PBS, Frontline: The Jesus Factor.Interview with Alan Jacobs. In an interview with PBS, Jacobs defends evangelism as a complex faith requiring reflection and serious intellectual engagement.  He also engages the political dimension of the faith, commenting on the evangelical view of social issues and the role of the government.

Elie, Paul. 2003. The Life You Save May Be Your Own: An American Pilgrimage. Farrar, Straus & Giroux. Elie weaves together biographies of four “like-minded writers”—Dorothy Day, Flannery O’Connor, Thomas Merton, and Walker Percy—each of whom shared two things in common: a strong Catholic faith and resentment from their literary circles for holding that faith. His work functions as a commentary of faith in the modern world.

Knight, Mark. 2009. Introduction to Religion and Literature. Continuum. Knight offers an introduction to the relationship between literature and religion. By examining religious motifs such as original sin, creation, eschatology in an array of texts, Knight demonstrates what the “religious reading” of literature actually entails.

Lewis, C.S. 2001. The Screwtape Letters. HarperOne. In this exchange of letters between Screwtape, demon in service of “Our Father Below,” and his protégé Wormwood, Lewis explores the idea of temptation. Likening hell to a bureaucracy, Lewis calls attention to role that demanding passions like envy and resentment play in our daily lives.

Lewis, C.S. 2001. Mere Christianity. HarperOne. In response to the growing popularity of televangelism in America, Lewis makes a rational case for orthodox Christianity, arguing that a genuine expression of the religion requires more than blind faith and colorful demonstrations.

O’Connor, Flannery. 1965. Everything that Rises Must Converge. Farrar, Straus & Giroux. Within the context of the Civil Rights Movement in the South, O’Connor addresses the notion of moral ambiguity as manifested in the racist attitudes unknowingly harbored by a mother and her son.

O’Connor, Flannery. 1977. A Good Man Is Hard to Find. Harcourt Brace Jovanovich. O’Connor paints a portrait of the dark side of human nature—in particular, how easily we can be caught up in a tangle of our own motivations—through a series of short stories set in the rural south.

Will Harry Potter, the ‘boy who lived,’ survive among those Christian audiences skeptical of dark magic and witchcraft? Recently, some conservative religious leaders have begun to praise the series' moral framework.