Nostra Aetate: A Catholic and Jewish Peace Treaty or a Spiritual Breakthrough?

Nostra Aetate: A Catholic and Jewish Peace Treaty or a Spiritual Breakthrough? 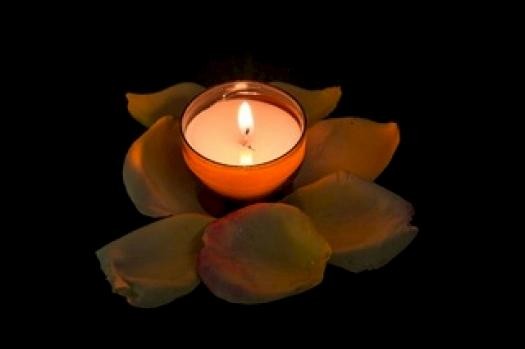 Nostra Aetate (In Our Age) was promulgated by the Second Vatican Council on October 28, 1965 and this year’s fiftieth anniversary has witnessed many conferences devoted to celebrating it. Although its full title is “Declaration on the Relationship of the Church to Non-Christian Religions,” the heart of the statement and its most influential component was its redefinition of the relationship between Catholics and Jews. Should it be regarded as a peace treaty between the two faiths or as spiritual breakthrough for humanity? Should it be considered in some ways as a joint declaration because so many important drafters of it were Catholics who had converted from Judaism?  Did these converts teach the Catholic Church a fresh way of understanding Jews? Although its 624 words have met with broad acclaim, there are many issues that are in need of new insight. Among them are these: How should the Catholic Church recognize and speak with the diverse Jewish communities? Should the religious community hold the privileged position as interlocutor with Catholics? How should religious fundamentalism be addressed, especially as it influences the politics of the Middle East? Finally, how should we continue the reform of Catholic liturgical speech about Jews? 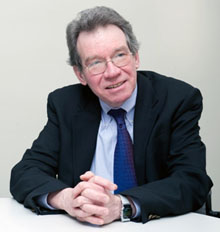 James Bernauer, S.J., a Jesuit priest, is the Kraft Family Professor at Boston College where he has been in the Philosophy Department since 1980. He is currently also Director of the Center for Christian-Jewish Learning at Boston College. His fields of interest include Holocaust Studies, German Jewry, and the philosophies of Michel Foucault and Hannah Arendt.

The author of many publications, his most recent book, co-edited with Robert Maryks is "The Tragic Couple”: Encounters Between Jews and Jesuits (2014) He is also the author of “The Flawed Vision in Claude Lanzmann’s Shoah and the Corrective Lens of Pierre Sauvage” in Through a Lens Darkly: Films of Genocide, Ethnic Cleansing and Atrocities (2013); "Secular Self-Sacrifice: On Michel Foucault's Courses at the Collège de France," in Michel Foucault: The Legacy (2009); "A Catholic Conversation with Hannah Arendt." Friends on the Way: Jesuits Encounter Contemporary Judaism (2007). "Philosophizing After the Holocaust," Jesuit Postmodern: Scholarship, Vocation, and Identity in the 21st Century (2006). His current research project is a study of Jesuits and Jews during the period of the Holocaust. 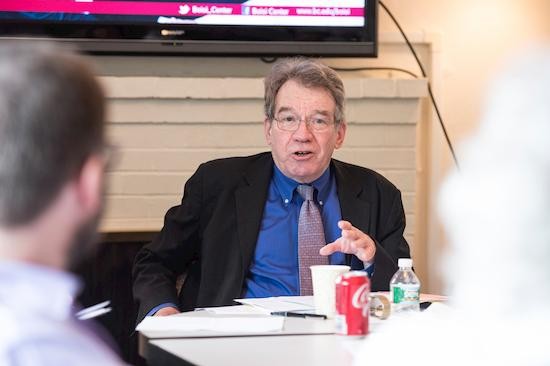 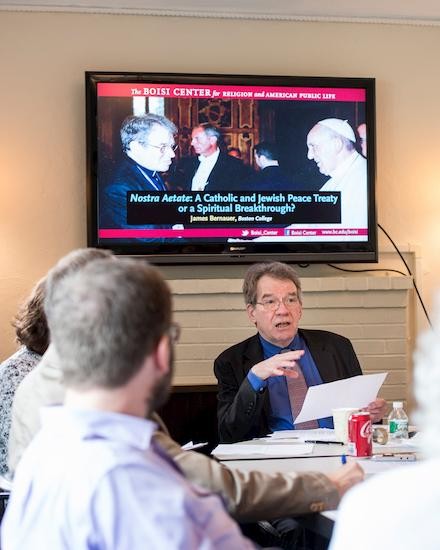 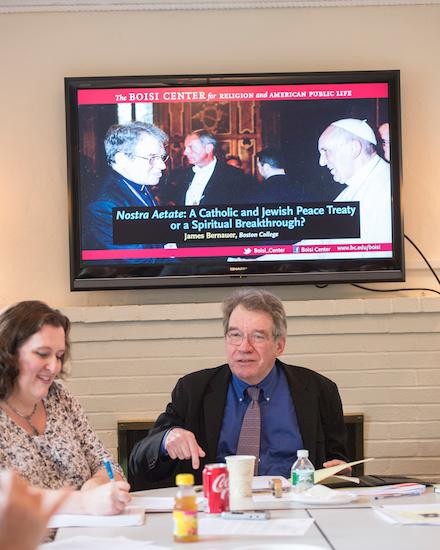 In honor of the 50th anniversary of Nostra Aetate, Boston College professor of philosophy James Bernauer, SJ, spoke at the Boisi Center on October 14. This groundbreaking encyclical explores the Catholic Church’s relationship with other faith traditions. In particular, it discusses the Church’s relationship with members of the Jewish faith and rejects the charge that Jews are responsible for killing Christ. Nostra Aetate formalizes the growing solidarity between these two Abrahamic faiths and condemns anti-semitism.

Bernauer, also director of the Center for Christian-Jewish Learning at BC, began the luncheon by describing Pope Francis’ role in promoting interfaith dialogue. He highlighted Pope Francis’ address to members of the International Council for Christians and Jews in Rome in June. At the council, the pope acknowledged the importance of Nostra Aetate for the Church.

Bernauer then described the development of Nostra Aetate, from the International Conference of Christians and Jews that took place in Seelisberg, Switzerland in 1947 to its official promulgation in late 1965. He highlighted the landmark encounter between Rabbi Abraham Heschel and Cardinal Augustin Bea in 1963. In addition, Bernauer noted that a few of Bea’s advisors were Jewish converts to Catholicism. These individuals, along with discussions with Jewish leaders, influenced Bea’s formulation of the document. While the Holocaust is never mentioned in Nostra Aetate, Bernauer maintained that the text was written in part because of a growing recognition of the atrocity.

Bernauer emphasized that Nostra Aetate continues to provide a foundation for Jewish-Christian relations today, even 50 years after its release.

National Jewish Scholars Project in the Institute for Christian and Jewish Studies, "A Jewish Statement on Christians and Christianity."

Second Vatican Council, "Nostra Aetate: The Declaration of the Church to non-Christian Religions."

In late Septemer, 2015, Pope Francis paid a visit to St. Joseph’s University in Philadelphia and blessed the recently dedicated “Synagoga and Ecclesia in Our Time” statue which commemorates the 50th anniversary of Nostra Aetate. In his upcoming talk at the Boisi Center, James Bernauer, SJ will speak on the relationship between Catholics and Jews in the wake of the declaration.

According to an article published by the National Catholic Reporter,  students, faculty, and staff from over six Catholic colleges gathered in Rockhurst University, a Jesuit-run university in Kanas, MO on September 3 to celebrate the 50th anniversary of Pope Paul VI's declaration. Next month at the Boisi Center, BC Philosophy professor James Bernauer will consider the broader relationship between Jews and Catholics in light of the 50th Anniversary of Nostra Aetate.

Boston College senior Molly Boigon, recently published an article on her experience of choosing Judaism at BC, a Jesuit Catholic university.