Catholic Charities USA is an integral part of the safety net in this country. How do we approach the issue of poverty in this country? Our current system may be inadequate. What principles could guide us to a more effective response? What is the Church’s role in responding to this need? The answers to these discussions will help us to be leaders and not simply be reactionary in our response. 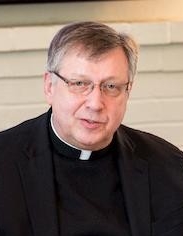 Fr. Larry Snyder is the president and CEO of Catholic Charities USA (CCUSA), the national office of more than 160 local Catholic Charities agencies nationwide. Six months after joining CCUSA in 2005, Snyder led the network's response to Hurricanes Katrina and Rita, and he currently oversees CCUSA'S project to reduce poverty in America. Snyder is also a member of the Pontifical Council Cor Unum and President Obama's Advisory Council of Faith-based and Neighborhood Partnerships. He is the author of Think and Act Anew: How Poverty in America Affects Us All and What We Can Do About It (2010). He received his B.A. from Illinois Benedictine College, his M.A. in divinity from the Saint Paul Seminary School of Divinity, and a M.A. in public administration from Hamline University. 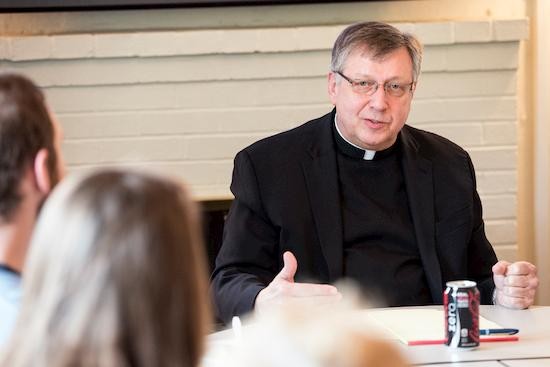 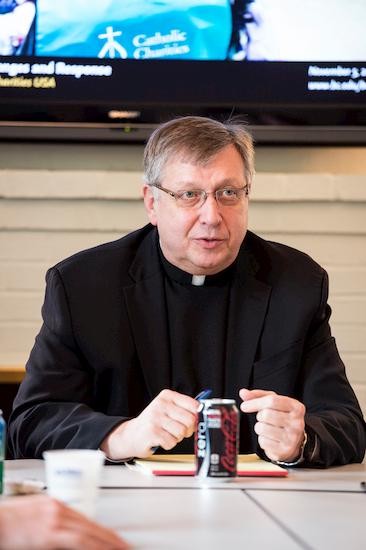 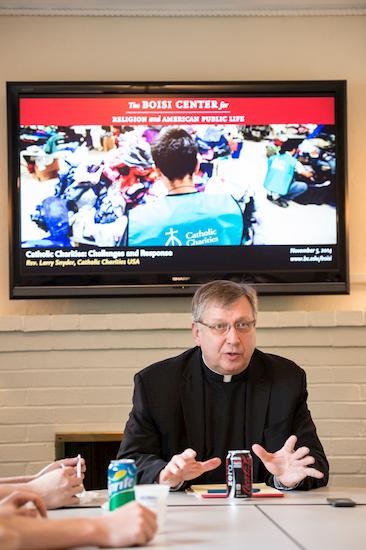 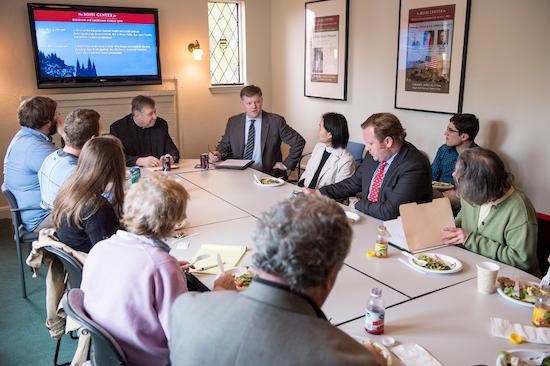 The Boisi Center hosted its final lunch colloquium of the fall semester on Wednesday, November 5, welcoming Rev. Larry Snyder to 24 Quincy Road. Drawing on his experience as the president and CEO of Catholic Charities USA, Fr. Snyder discussed his organization’s attempts to reduce poverty in America, and the role that Catholic Charities can play in the nation’s social safety net.

Snyder began by explaining Catholic Charities’ diocesan structure. Although Catholic Charities serves about 9 million people annually, its locally governed nature ensures that it attends to specific local needs rather than applying a one-size-fits-all policy. However, this does not mean that Catholic Charities is entirely self-sustaining: in fact, Snyder explained, they receive 60 percent of their funding from the federal government. Snyder described this cooperation as a mutually agreed-upon contract, with deep historical roots.

Snyder continued by outlining Catholic Charities’ three-pronged strategy to reducing poverty. First, the agency aims to be systems-changing, helping the poor to thrive rather than merely survive, unlike the current safety net. Snyder explained that a principle of subsidiarity is key here, with a focus on developing individual opportunity plans to address specific needs. Second, he spoke of his strategy to engage corporate America in new ways, whether helping them design better food products or engaging with altruistic “benefit corporations.” Finally, Snyder explained that Catholic Charities’ strategies are always results-driven, hence his partnership with Notre Dame’s Lab for Economic Opportunities to analyze the tangible effects of their policies.

Fr. Snyder ended his remarks with an anecdote about Congressman Paul Ryan, who was convinced to make a change in his proposed national budget after a visit to a Catholic Charities agency in Wisconsin showed him the value of their case management approach to poverty.

While fielding questions from the audience, Fr. Snyder commented that the United States lags behind the rest of the developed world with regard to our treatment of the poor, and that people of faith have an obligation to do better.

Larry Snyder, Think and Act Anew: How Poverty in America Affects Us All and What We Can Do about It (Maryknoll, NY: Orbis Books, 2010).