With the Islamic State increasing its reach in the Levant and violence in the name of Islam being perpetrated around the globe, Islam and politics appear highly intertwined in our age. In this Boisi Center lunch, distinguished scholar of the Middle East Ali Banuazizi will critically examine the connection between Islam and the political realm. 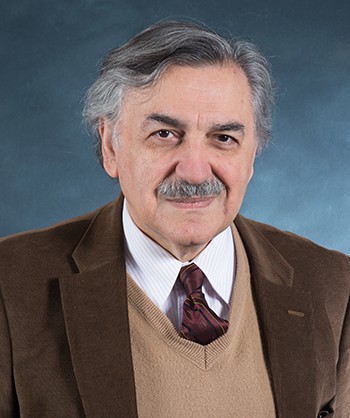 Ali Banuazizi is a political science professor at Boston College. His research focuses on the political cultures of the Middle East; comparative study of religion, civil society, and politics in the Middle East; and Iran’s social history and contemporary domestic politics and foreign relations. He is currently the director of the Program in Islamic Civilization and Societies (ICS) and chair of the International Studies Academic Advisory Board at Boston College; is on the editorial board and advisory council of the journal Iranian Studies, of which he is a founding editor; and is a past president of the Middle East Studies Association (MESA) and the International Society for Iranian Studies (ISIS). He is the editor of several volumes, including The New Geopolitics of Central Asia and Its Borderlands, and the author of numerous journal articles. He earned his B.S. from the University of Michigan, his M.A. from the New School for Social Research in New York and his Ph.D. from Yale University. 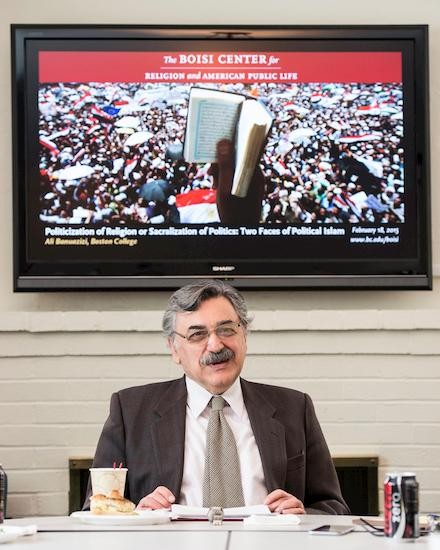 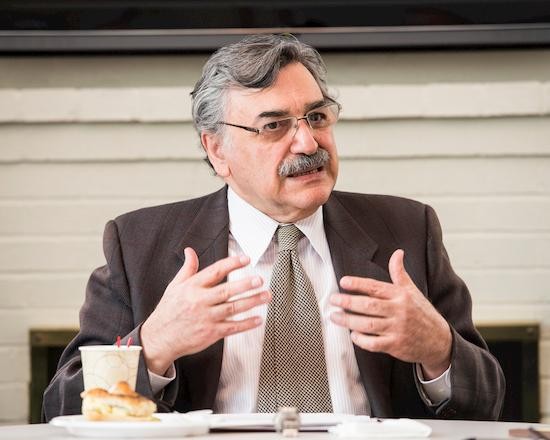 On February 18, 2015, Boston College political science professor Ali Banuazizi addressed a packed Boisi Center lunch colloquium on the relation of Islam and public life. His focus was largely on the Middle East, where members of ISIS/ Islamic State had recently committed another act of exceptional violence in executing a captured Jordanian pilot.

Banuazizi argued that we can see two related but (mostly) distinct tendencies of political Islam in the contemporary period: one toward the “politicization of religion” and another toward the “sacralization of politics.” It is the latter, Banuazizi said, that we ought to condemn.

The “politicization of religion” is a long-standing Islamic tradition of active engagement in politics by individuals or groups primarily on the basis of their religious convictions. At a time when secular ideologies such as socialism and nationalism have lost much of their appeal in the Muslim world, Banuazizi said, it is understandable that an Islamic ideology would emerge and be attractive, especially since it pushes followers to look to its own traditions (rather than Western ones) for political guidance.

This can be distinguished from attempts to sacralize an ideology, a political movement, or a territorial state by claiming that they are based on divine will and providence. Groups like al-Qaeda, the Taliban in Afghanistan, Boko Haram in Nigeria, and more recently the Islamic State claim divine inspiration for their terror campaigns. But their oft-stated goal of a return to a golden age of Islam mistakenly equates a small communi ty of the faithful during the prophet’s life with the idea of the modern “state,” which developed many centuries later. Indeed, Banuazizi argued, Islamic theology offers no blueprint for establishing an “Islamic state” and has relatively little to say about managing the political affairs of the community.

Nevertheless, a battle-hardened ISIS is  a lethal threat to religious minorities in the region as well as Muslims who do not follow its highly distorted view of Islam. Only military force can dislodge it at this point, said Banuazizi.

In June 2014, the Islamic State declared the formation of a caliphate. Since then it has both been attracting new members and wreaking havoc throughout the Middle East. On February 18, BC professor Ali Banuazizi will address a Boisi Center lunch audience on the connection between politics and Islam.