How Would You Reform the Catholic Church?

How Would You Reform the Catholic Church? 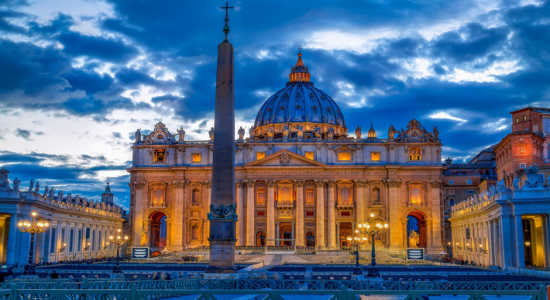 An exciting panel composed of a Catholic bishop, a Latinx theologian, one of the foremost ecclesiologists in America, and one of the most respected scholars studying the question of women deacons will address the current situation in the Catholic Church, a moment that has been described as "the biggest crisis facing Catholicism since the Protestant Reformation of the 16th century."

Richard Gaillardetz is the Joseph Professor of Catholic Systematic Theology at Boston College and is currently the chair of the theology department. He has published numerous articles and authored or edited fourteen books. Most recently, he published a newly revised and expanded edition of his popular book, By What Authority? Foundations for Understanding Authority in the Church (Liturgical Press, 2018). He is the editor of the Cambridge Companion to Vatican II which will be published by Cambridge University Press in the spring of 2020. In 2000, he received the Sophia Award from the Washington Theological Union for theological excellence in service of ministry and in 2018 he received the Yves Congar Award for theological excellence from Barry University. Gaillardetz served as president of the Catholic Theological Society of America in 2013-14.

Natalia Imperatori-Lee is a professor of religious studies at Manhattan College in the Bronx, NY, where she also coordinates the Catholic Studies program. She is the author of Cuéntame: Narrative in the Ecclesial Present (Orbis Books, 2018). Her work focuses on the intersection of Latinx theologies, feminist theologies, and Catholic ecclesiology. She has published in Theological Studies and The Journal of Feminist Studies in Religion. A native of Miami, Florida, Imperatori-Lee has served on the Board of Directors of the Catholic Theological Society of America and the Academy of Catholic Hispanic Theologians of the US. She recently presented at a series of seminars on the implementation of Pope Francis’s Amoris Laetitia. At Manhattan College, Imperatori-Lee teaches courses on contemporary Catholicism, including Vatican II, as well as courses like Sexuality and the Sacred and Women in Western Religion. She is currently working on a book about women in the Catholic Church.

Imperatori-Lee speaks regularly at parishes, universities, and in other venues about feminism, faith, and the Latinx communities in the United States. Her writing has appeared in Commonweal and America magazines, and has appeared as a guest expert on Pope Francis on CNN and MSNBC. She lives in the Bronx with her spouse and two sons.

Bishop Mark O'Connell is an auxiliary bishop of the Archdiocese of Boston. He was born in Toronto, Canada of American parents and the family moved to Boston in 1976 when his father, Thomas O’Connell, became the University Librarian of Boston College. Bishop Mark graduated from Boston College in 1986 and from Saint John Seminary in 1990 when he was ordained a priest for the Archdiocese. In 1997 Bishop O’Connell began studies in Rome and obtained a doctorate in Canon Law from the Pontifical College of the Holy Cross in 2002. Since obtaining his degree, he has worked in various canonical positions within the Archdiocese of Boston, including serving as the Judicial Vicar and Professor of Canon Law. He currently serves as the Regional Bishop for the North Region of the Archdiocese of Boston which includes sixty parishes and is himself a pastor of Saint Theresa Parish in North Reading.

Phyllis Zagano is an internationally acclaimed Catholic scholar and lecturer on contemporary spirituality and women's issues in the church. Her award-winning books include Holy Saturday: An Argument for the Restoration of the Female Diaconate in the Catholic Church (First Place, 2001 Catholic Press Association and 2002 College Theology Society), Women & Catholicism: Gender, Communion, and Authority (Second Place, 2012 Catholic Press Association) and Women Deacons? Essays with Answers (First Place, 2017 Catholic Press Association). Her writing is widely translated — her best-selling On Prayer: A Letter for My Godchild is published in Indonesian, Spanish and Italian as well as English — and she edited the Liturgical Press’ "Spirituality in History" series. She is a member of the Papal Commission for the study of the diaconate of women. Winner of two Fulbright awards, her biographical listings include Marquis Who’s Who. Her professional papers are held by the Women in Leadership Archives, Loyola University, Chicago. She holds a research appointment at Hofstra University, Hempstead, New York.

Mark Massa, S.J. (moderator) is the director of the Boisi Center for Religion and American Public Life at Boston College, where he is also a professor of theology. Massa received his Ph.D. in American religion from Harvard University, and is the author of seven books; his most recent, The Structure of Theological Revolutions: Catholic Debates About Natural Law, from Oxford University Press, 2018. His monograph published in 1999, Catholics and American Culture: Fulton Sheen, Dorothy Day, and the Notre Dame Football Team, received the Alpha Sigma Nu Award for Best Work in Theology for 1999-2000. His ongoing area of research is American Catholic faith and culture of the past century. 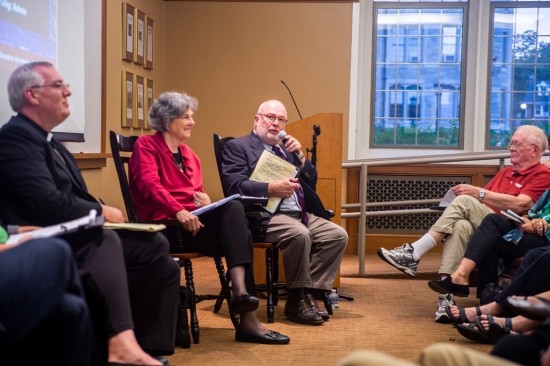 Members of the BC and wider community filled Devlin 101 for a panel discussion on church reform. 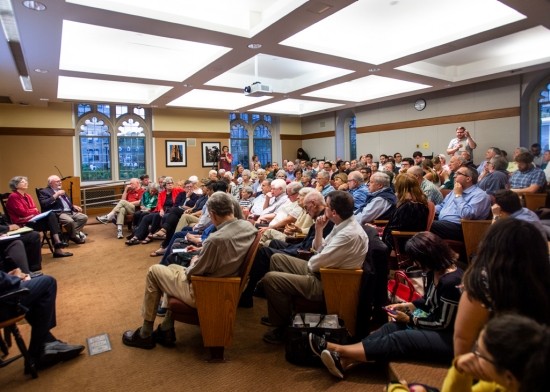 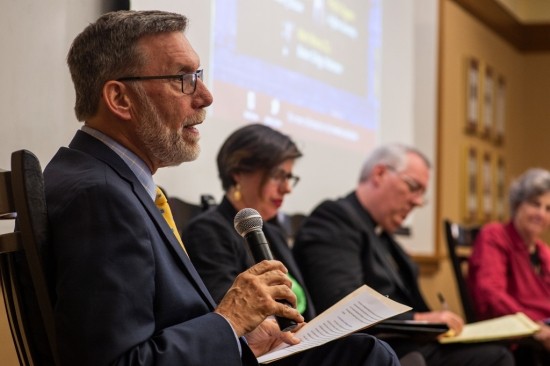 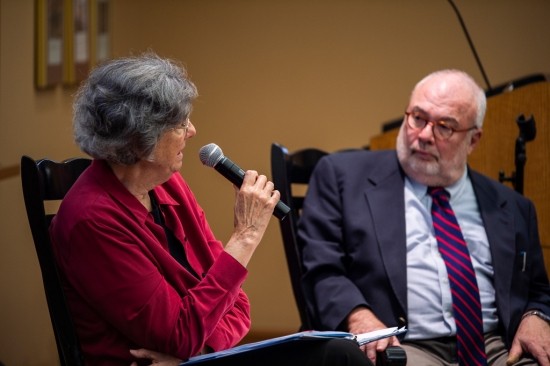 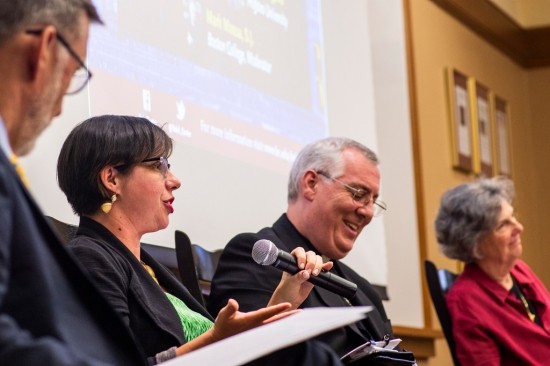 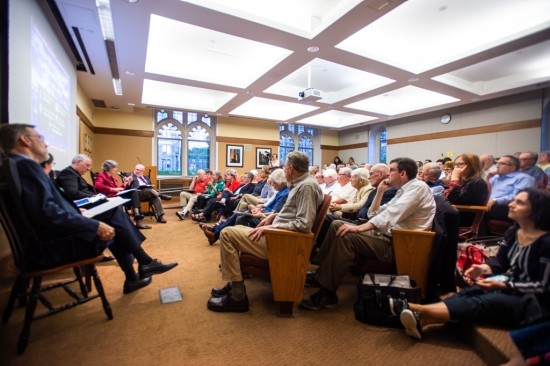 Recent years have been difficult for many Catholics. In light of the ongoing revelations from the sex abuse scandals, the marginalization of certain people and groups within the Catholic Church, and the oftentimes dramatic infighting, many American Catholics and Catholics around the world are asking themselves whether it is worth it to stay in the Church.

Others, however, are asking themselves how the Church might change. The Boisi Center’s first event of the year brought a diverse panel together to answer the question, “How would you reform the Catholic Church?” The panel featured Richard Gaillardetz of Boston College, Natalia Imperatori-Lee of Manhattan College, Bishop Mark O’Connell of the Archdiocese of Boston, and Phyllis Zagano of Hofstra University, with Mark Massa, S.J. moderating.

Massa began by asking the panelists what the single most important issue is that they would reform in the Church today?

Zagano answered first, asserting that she would allow women to be ordained deacons. She argued that in doing so the Church would be returning to its history because women were ordained deacons in the early centuries of Christianity. She also noted the consistency of such a decision with the belief that we all were created in God’s image—women, as men, can image Christ and gendered arguments for its prohibition should be denied.

O’Connell focused on overcoming the damage caused by the sex abuse crisis. He argued that to process and heal after the scandal and to ensure it is not repeated, the laity must be more involved. He urged the Church to allow more laypeople to participate in its councils, committees, and synods, and he offered that canon law reform could aid in redistributing power in the fight against clericalism. These two reforms, he argued, could begin the move towards inclusive justice and mercy.

Imperatori-Lee advocated for dismantling the seminary system as it currently exists. She argued that part of the problem of clericalism and the abuse crisis is that  the problems priests face are exacerbated by the fact that seminarians are educated and formed in isolation from the future congregations in which they will live and serve. Instead, she advocated for models of collaborative formation. For example, the Boston College School of Theology and Ministry offers classes where seminarians and priests study alongside lay people. She affirmed this model and pushed for a more universal adoption of it.

Gaillardetz argued to reform the relationship between the local Church and the Church hierarchy. He specifically highlighted the relationship between bishops and the communities they serve. Gaillardetz envisioned a Church in which bishops are not ordained to titular sees, but instead are called from and for their local communities in smaller sees to which they are more accountable. This reform, he proposed, would require dividing existing dioceses into smaller jurisdictions, but it would allow bishops to be more active with the faithful as opposed to the honorific model that some episcopal appointments project.

Massa then invited the panelists to either expand on their first point or to highlight a new theological question of interest. Zagano took this opportunity to expand on her first point—the diaconate for women. She highlighted for the audience that no doctrinal law prohibits women’s ordina- tion to the diaconate, only ecclesial law. She illustrated this point with the story of two women ordained to the diaconate as recently as 19th century France.

O’Connell introduced a new point. He perceives a struggle between the strict and lenient interpretations of Church precepts, laws, and beliefs as well as in the discourse between the two. American Catholics are thus faced with a choice between extreme right or left (conservative or progressive) positions with little room for a middle ground. In response to this situation, O’Connell proposed two remedies. One remedy is “to learn to love baseball before one learns the rules of the game.” In this, O’Connell emphasized that learning to love God should be prioritized over engaging in theological debates about canon law. A second remedy is advocating for a centered Catholicism that refuses the demand adherence polemical stances are making from both sides. These, he believes, ought to be enticing for individuals looking to return to the Church, which can be facilitated by a program— comparable to RCIA—to welcome back lapsed Catholics.

Imperatori-Lee made the case for decolonizing the Church. She asserted that many minoritized Catholics, such as women, Latinx, Asian, and African Catholics, have been subjugated and instrumentalized by the Catholic Church. She hopes that someday non-Western Catholics will be able to fully participate in and thus shape the Catholic ecclesial narrative. As she said, “Wounds heal from the margins in.”

Finally, Gaillardetz hopes to find a new theology that gives people a reason to stay in the Catholic Church in the midst of so many reasons to leave. When the Second Vatican Council declared that salvation can be found outside the Church, out of a sense of salvific optimism, the unintended consequence was complacency by Church hierarchy. Gaillardetz envisions a new practical theology that attracts young people and marginalized communities.

The lively Q&A session that followed focused on inclusion within the Catholic Church. The audience raised issues such as the role of “paraecclesial” communities in the Church and women of color in Jesuit institutions of higher education.

Swidler, Leonard J. Making the Church Our Own: How We Can Reform the Catholic Church From the Ground Up. Lanham: Rowman & Littlefield Publishers, 2007.

Zagano, Phyllis. Holy Saturday: an Argument for the Restoration of the Female Diaconate in the Catholic Church. New York: Crossroad Pub, 2000.

Okwara, Mariaolisaemeka Rosemary. “The Renewal and Reform of the Catholic Church’s Relationship with the Religious Others: Prospects and Challenges for a Theologistic Humanistic Turn in Christian-Muslim Dialogue.” New Blackfriars 99, no. 1080 (March 2018): 206-218. DOI: 10.1111/nbfr.12348.

Zagano, Phyllis. “Look up at the Altar, where are the women?” National Catholic Reporter, April 22,2019. https://bit.ly/2kETKSS

From October 6-28, a synod of bishops, primarily from the Amazon region, will take place in Rome. There are a few key points to be discussed at this meeting, namely the possibility of ordaining married men, the relationship between the Catholic Church and indigenous cultures, and the protection of the environment. While the possibility of married men in the priesthood is garnering much attention, the other two topics are also of extreme importance as the Catholic Church has a history of partaking in the mistreatment of indigenous cultures. Additionally, Pope Francis has recently made increasing efforts to draw attention to the severity of the environmental crisis. The “How Would You Reform the Catholic Church?” panel will provide a platform for all to consider what they hope the church will say and do to address these issues.