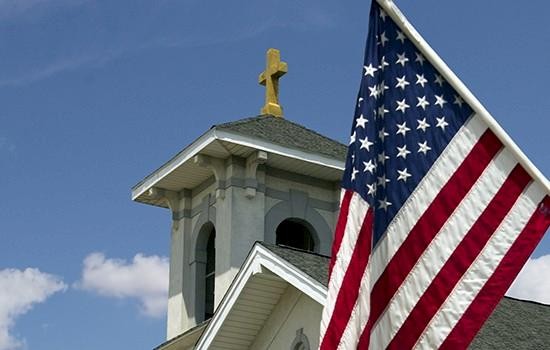 Should our laws aim to protect the religious practices and beliefs of individuals or groups, or both? Are these ends at odds with one another? What sustains the free exercise of religion in the United States? On November 29 the Boisi Center hosted legal scholars Richard Garnett and Gregory Kalscheur, S.J. to address these questions in a lively forum on religious freedom. 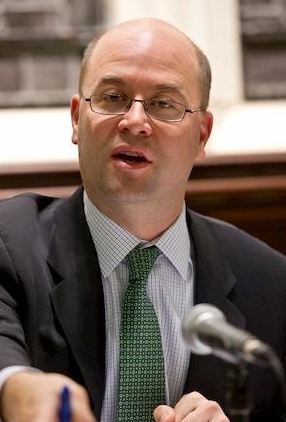 Richard Garnett is Associate Dean for Faculty Research and Professor of Law, and concurrent Professor of Political Science, at the University of Notre Dame. His areas of scholarly interest and expertise include constitutional law, religious freedom, Catholic education and the First Amendment. He is the author of dozens of scholarly articles and book chapters, and comments regularly in print and broadcast media on legal matters.  His current book project, Two There Are:  Understanding the Separation of Church and State, is forthcoming from Cambridge University Press.  Prof. Garnett is the founding director of the Notre Dame Law School’s Program on Church, State, and Society, an interdisciplinary project that focuses on the role of religious institutions, communities, and authorities in the social order. He is also a fellow of Notre Dame's Institute for Educational Initiatives, a founding Associate of the American Center for School Choice, and a senior fellow of the Center for the Study of Law and Religion at Emory University. After earning a his B.A. in Philosophy from Duke University and J.D. from Yale Law School, he clerked for the Chief Judge of the U.S. Court of Appeals for the Eighth Circuit, then for the Chief Justice of the U.S. Supreme Court, William H. Rehnquist. 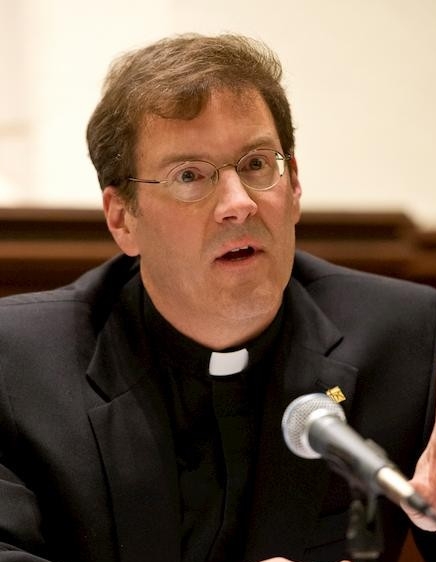 Gregory Kalscheur, S.J., is Associate Professor at Boston College Law School and Senior Associate Dean of Arts and Sciences. Prior to his employment at Boston College, he taught political science at Loyola College, was assistant to the director of Loyola’s Center for Values and Services, and served as assosciate pastor at St. Raphael the Archangel Church in Raleigh, NC. Before entering the Society of Jesus in 1992, he served as clerk for Judge Kenneth F. Ripple, US Court of Appeals for the Seventh Circuit, and worked as litigator at Hogan & Hartson. 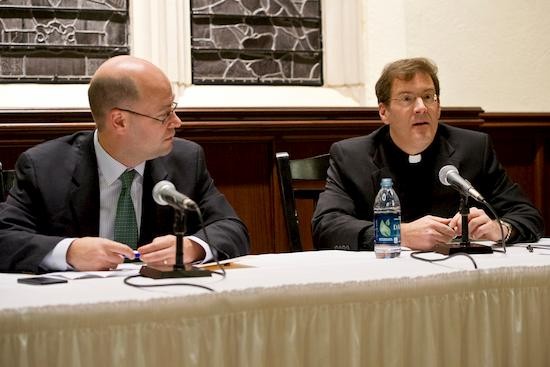 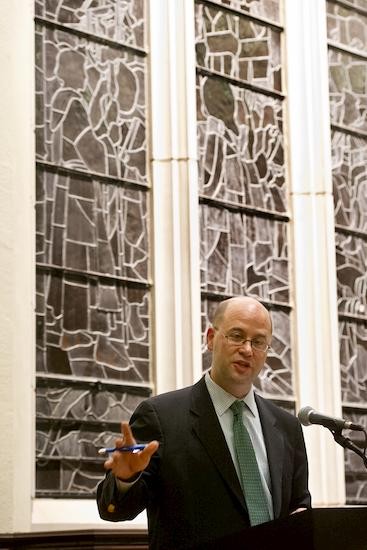 Richard Garnett lectures on the relationship between individual and institutional religious freedom. 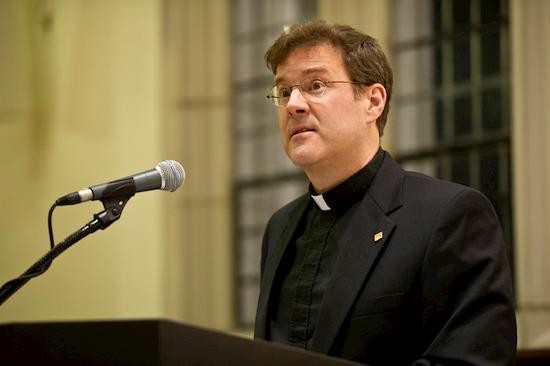 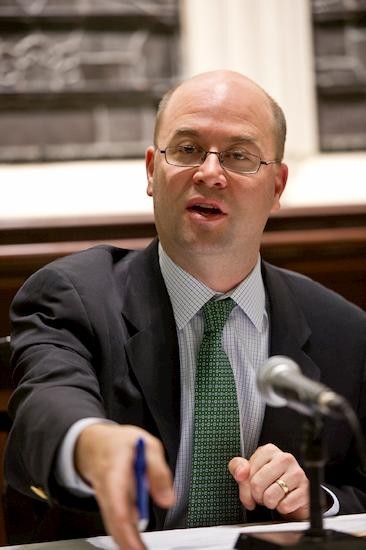 Richard Garnett responds to questions after his lecture. 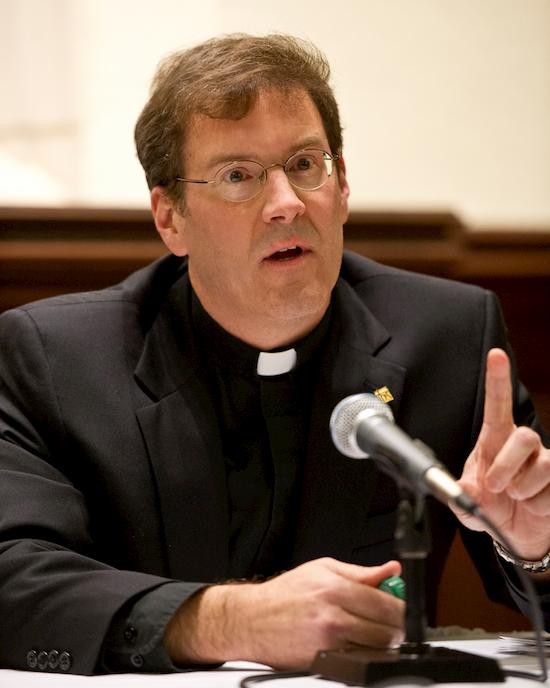 Gregory Kalscheur S.J. responds to a question during the discussion. 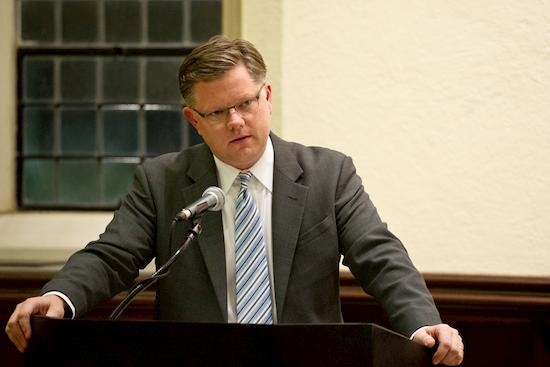 Should our laws aim to protect the religious practices and beliefs of individuals or groups, or both? Are these ends at odds with one another? What sustains the free exercise of religion in the United States? On November 29 the Boisi Center hosted legal scholars Richard Garnett and Gregory Kalscheur, S.J. to address these questions in a lively forum on religious freedom. Garnett, a prolific scholar and legal commentator, is professor of law and associate dean for faculty research at the University of Notre Dame School of Law. He began by noting that “religious freedom is a human right, grounded in human dignity, essential for human flourishing.” The special protection the Constitution gives to religion is a recognition that religious freedom is “part of the very structure of a free society, not merely a grudging concession made by a tolerant sovereign.” Religious freedom protections aren’t accidents or anachronisms; they are “features, not bugs” in our laws.

Garnett argued that religious freedom is properly protected in this country by a secular government and its secular laws—not to marginalize religion but rather “to protect religious freedom in private, in public, in civil society and in politics.” Still, these stout legal protections are insufficient without a robust cultural commitment to religious freedom. Quoting Archbishop Charles Chaput, Garnett said that the Constitution is “just another elegant scrap of paper unless people keep it alive with their convictions and lived witness,”something Garnett said was under threat today.

Boston College law professor and associate dean of arts & sciences Gregory Kalscheur, S.J. offered a response. Kalscheur agreed with Garnett’s account of religious freedom as intrinsic to both individuals and institutions, and strongly endorsed the Supreme Court’s recent decision in Hosanna Tabor, which maintained the rights of religious communities to hire and fire (without concern for employment discrimination laws) employees who perform religious functions.

What, then, are the limits of the church’s freedom from government interference? All human activity has an inherently religious dimension, Kalscheur argued, citing Jesuit Michael Buckley’s claim that “There is a religious density to all things.” But this does not mean all church activity should fall outside the realm of regulation. Kalscheur proposed that while “uniquely religious” activities should be exempt from scrutiny, “when the church embodies its religious mission through temporal education and social services activities that are not uniquely religious (though they are inherently religious), they are engaged in activity that the civil authority may have the jurisdiction to regulate.” When religious activity violates public order to a degree that intervention is required, the state should still honor the privileged character of religious freedom by interfering in the most minimal way possible, and thus upholding a culture of respect and tolerance.

Garnett, Richard. “Do Churches Matter: Towards an Institutional Understanding of the Religious Clauses.” Notre Dame Legal Studies No. 08-17. 2008.

Garnett, Richard. “The Freedom of the Church.” Journal of Catholic Social Thought Vol. 4. 2007.

Richard Garnett in Public Discourse: Ethics, Law, and the Common Good, Positive Secularism and the American Model of Religious Liberty.