The Church, the Economy, and Social Justice: Reflections on Caritas in Veritate

The Church, the Economy, and Social Justice: Reflections on Caritas in Veritate 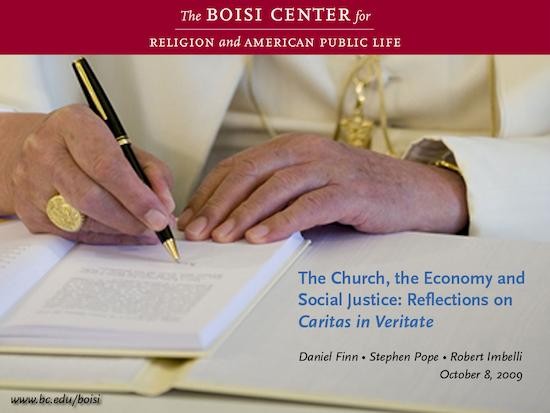 As the world recovered from a global economic crisis in June 2009, Pope Benedict XVI released an important papal encyclical on human economic development. Caritas in Veritate (Charity in Truth) addresses important social questions at length from a Catholic perspective, and has prompted much discussion on both the political left and right. The Boisi Center brings together a panel of experts to reflect on the theological basis as well as the practical significance of the encyclical. 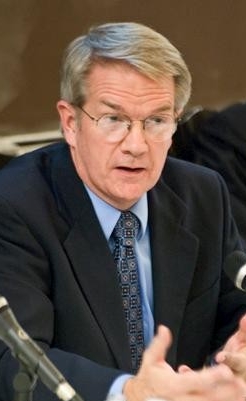 Daniel Finn is a professor of economics and theology at St. John’s University in Collegeville, Minnesota. He received his Ph.D. from the University of Chicago. Professor Finn is the current president of the Society of Christian Ethics and a past president of both the Catholic Theological Society of America and the Association for Social Economics. Professor Finn has written extensively on Catholic social thought and economics and his recent work includes The Moral Ecology of Markets: Assessing Claims about Markets and Justice (Cambridge, 2006) as well as articles in both Commonweal and Origins. He has received numerous recognitions for his contributions to theology and economics, including the Monica Hellwig Award from the Association of Catholic Colleges and Universities for outstanding contributions to Catholic intellectual life. 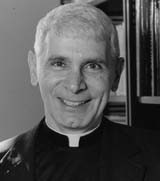 Robert Imbelli is an associate professor at Boston College and a priest of the Archdiocese of New York. Father Imbelli completed his S.T.L. at the Gregorian University in Rome and obtained his Ph.D. in Systematic Theology from Yale University. He was the director of the Institute of Religious Education and Pastoral Ministry at Boston College from 1986 to 1993, and is a past member of the board of the Catholic Theological Society of America. He edited and introduced the volume, "Handing on the Faith: the Church's Mission and Challenge," in Boston College's Church in the 21st Century series. He is also the author of several articles and chapters on Catholic systematic theology. His research interests include Christology, Trinitarian theology, and Christian spirituality. 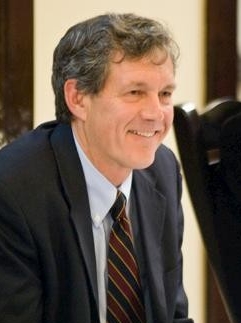 Stephen Pope is a professor of theology at Boston College. He received his Ph.D. from the University of Chicago and has since taught and written extensively on social ethics and theological ethics. Professor Pope is a member of the Society of Christian Ethics and the Catholic Theological Society of America. In 2007, he completed his most recent work, Human Evolution and Christian Ethics (Cambridge, 2007). He is also the author of The Evolution of Altruism and the Ordering of Love (Georgetown, 1994) and editor of Essays on the Ethics of St. Thomas Aquinas (Georgetown, 2001). 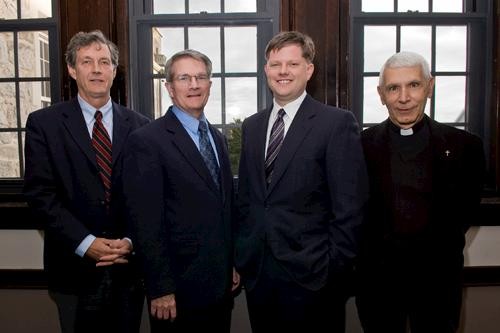 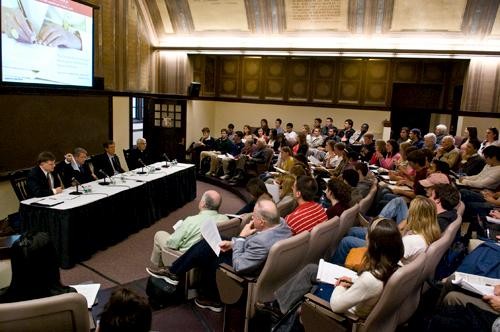 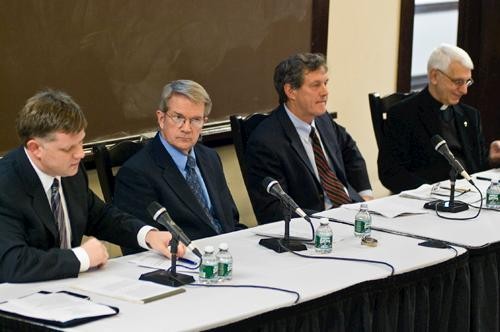 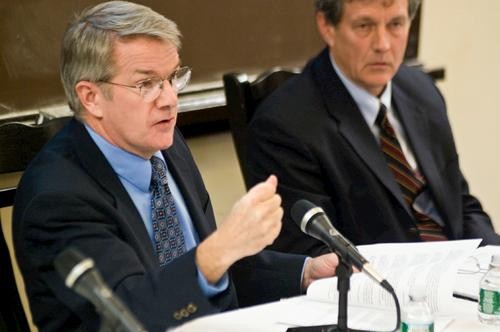 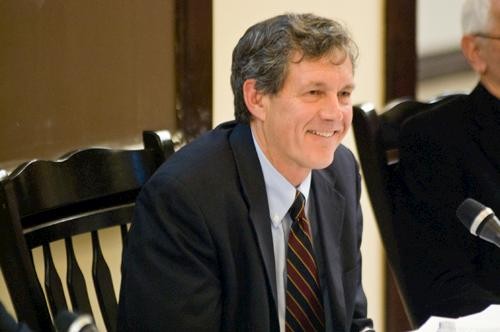 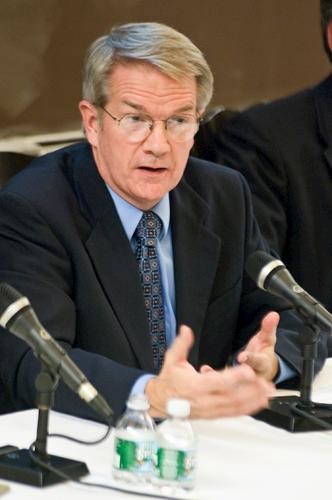 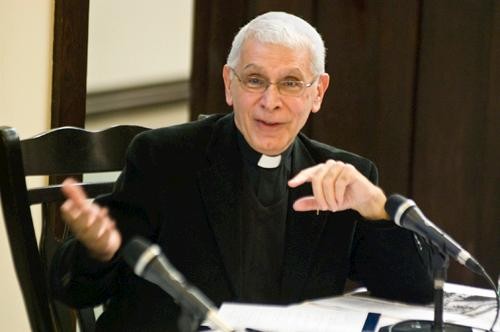 As parts of the world began to recover last summer from the global economic crisis, Pope Benedict XVI released an important encyclical, or teaching document, on human economic development. Caritas in Veritate (“Charity in Truth”) brings Catholic social thought to bear upon global economic life in ways that have inspired, and confounded, readers across the political and theological spectrum. To gain some purchase on the implications and importance of this document, the Boisi Center hosted a conversation on October 8 (in front of a standing-room-only crowd in the Fulton Debate Room) with three Catholic scholars who are expert in economics, ethics and systematic theology.

The keynote speaker was Daniel Finn, professor of theology and the Clemens Professor of Economics and the Liberal Arts at St. John’s University in Collegeville, Minnesota. Professor Finn, author of several books on economics and Catholic social thought, discussed the “Bologna school” of economic thought that undergirds Caritas in Veritate, which highlights reciprocity rather than altruism as a means of fostering right relations in the economic realm. The end goal is a more civil—meaning both civilized and non-state directed—economy that encourages profit a means for achieving human and social ends. “Hybrid firms” which pursue both commercial and social ends are necessary to achieving this goal, as is an active civil society.

The next speaker, Boston College theology professor Stephen Pope, focused on the ethical dimensions of the encyclical’s call for an “authentic humanism” that seeks to reintegrate morality into public life, including economic activity. Social justice and charity are the keys to this effort, which must foster a global morality that can overcome the “enlightened egoism” inherent in current economic and social life. Professor Pope’s primary critique centered upon the encyclical’s breadth; in trying to cover too much ground, he said, it favored theological abstraction over concrete ethical analysis. A focus on the ethical challenges, Pope said, are crucial when contemplating the universal implications of love, charity, and social justice in a pluralist society that holds divergent views of such concepts.

The final panelist was Robert Imbelli, a Catholic priest and associate professor of theology at Boston College. A systematic theologian like Benedict XVI himself, Fr. Imbelli reminded the audience that theology properly forms the center of the pope’s encyclical, as evidenced by several themes in Caritas in Veritate. First, the encyclical roots Catholic social teaching in the Gospel rather than natural law reasoning, Imbelli argued, and any analysis of Caritas based only on de-contextualized natural law reasoning “risks reducing religion to ethics.” Second, Imbelli noted, the pope’s central argument for an “integral humanism” that embraces “the good of every man and of the whole man” is itself ultimately grounded in Christology, which explores the meaning of Christ’s incarnation. Fr. Imbelli concluded by reflecting on the limits of regulatory policy, for “structural change, however necessary, can never substitute for authentic conversion of hearts and minds,” which itself requires ongoing spiritual exercise.

"Pope Benedict’s 'Caritas in Veritate'" by Daniel Finn in Commonweal, 2009.

Economics of Charity by Daniel Finn, 2006.

"Not Bold Enough" by Eugene McCarraher in Commonweal, 2009.

"From the Vatican, a Tough Read" by Peter Steinfels in The New York Times, 2009.

"In Defense of Politics" Commonweal editorial, 2009.