Wanting It All: Women and the State of Feminism in America

Wanting It All: Women and the State of Feminism in America

How are American women doing today? By some measures, extremely well: women now make up the majority of the American workforce, graduate from college at higher rates than men, and are taking unprecedented leadership roles in business, media, politics and law. Yet these successes bring new tensions for women's work/life balance, even as inequalities and discrimination persist across nearly all sectors of society. To introduce fresh perspectives and foster broad conversation, the Boisi Center has asked three scholars with wide-ranging expertise in history, religion and culture to discuss the state of women--and feminism--in the United States today. Join us for a conversation about equality and difference, marriage and family, race and religion, politics and law, and the historical trends that have brought us where we are today. 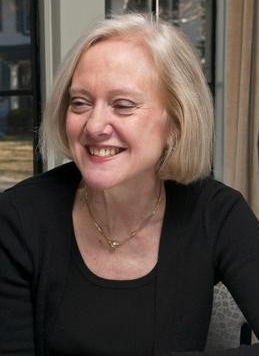 Lisa Sowle Cahill is the J. Donald Monan professor of theology at Boston College.  Professor Cahill has taught at Boston College since 1976 and has also been a visiting professor at Georgetown and Yale Universities. She received her Ph.D. from the University of Chicago, and is a past president of the Catholic Theological Society of America and the Society of Christian Ethics. Holding eight honorary degrees, Professor Cahill has written extensively on theological ethics. Her recent works include Bioethics and the Common Good (Marquette University Press, 2003), Theological Bioethics: Participation, Justice and Change (Georgetown University Press, 2005) and Genetics, Theology, Ethics: An Interdisciplinary Conversation (Crossroad, 2005). Her research interests include the history of Christian ethics, New Testament ethics, Catholic social ethics, feminist theology, bioethics, and the ethics of war and peace. She is currently a Fellow of the American Academy of Arts and Sciences, and has been a member of the Steering Committee of the Catholic Common Ground Initiative since 1998. 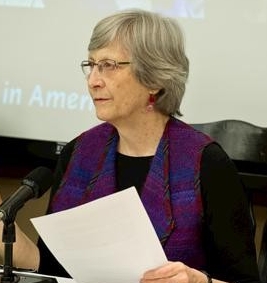 Laurel Thatcher Ulrich is 300th Anniversary University Professor in the Program in the History of American Civilization at Harvard University. She is the author of Good Wives: Image and Reality in the Lives of Women in Early New England, 1650-1750 (1982) and A Midwife's Tale: The Life of Martha Ballard Based on Her Diary, 1785-1812 (1990) which won the Pulitzer Prize for History in 1991 and became the basis of a PBS documentary. In The Age of Homespun: Objects and Stories in the Making of an American Myth (2001), she has incorporated museum-based research as well as more traditional archival work. Her most recent book is Well-behaved Women Seldom Make History (2007). Her major fields of interest are early American social history, women's history, and material culture. 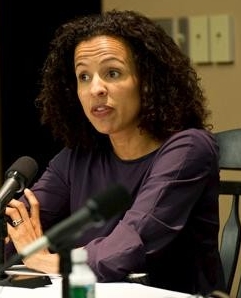 Cynthia Young is Associate Professor of English at Boston College and served as the Associate Professor of English and Director of African & African Diaspora Studies until 2009. Dr. Young has received numerous awards for her research, including four Rockefeller Foundation postdoctoral fellowships and research grants and a Ford Foundation dissertation fellowship. Her research interests include the literature and culture of the African diaspora, U.S. popular culture, race and cultural theory, and African America and U.S. ethnic literatures. Dr. Young's most recent project center on black British and black American cultural politics and popular culture in the post-September 11th world. She is author of Soul Power: Culture, Radicalism and the Making of a U.S. Third World Left (Durham: Duke University Press, 2006). Dr. Young received her Ph.D. and M.A. in American Studies at Yale University and a B.A. in English at Columbia University. 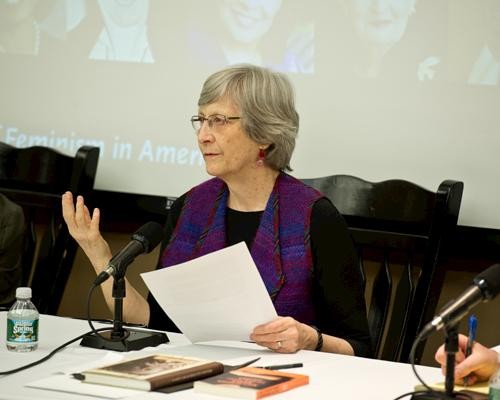 Laurel Thatcher Ulrich at the panel. 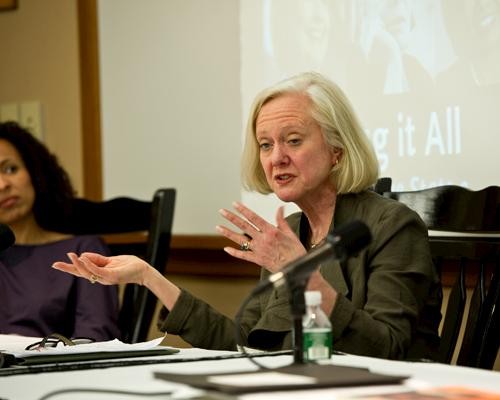 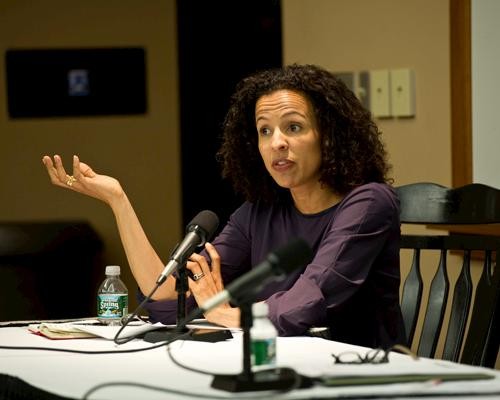 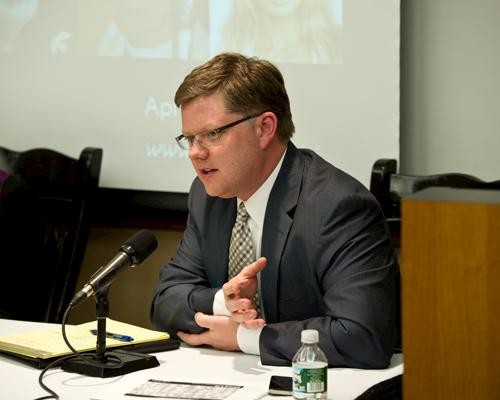 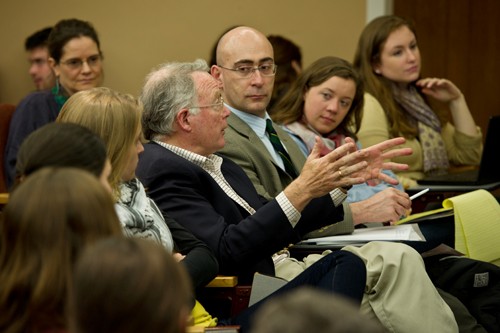 Audience Q&A at the panel. 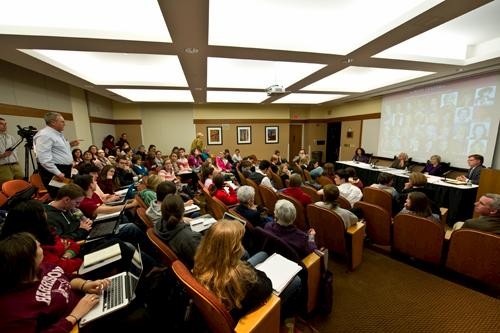 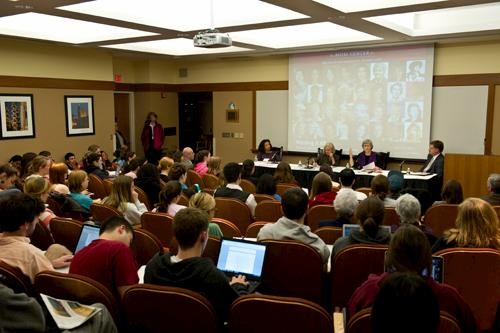 How are women doing today? The Obama administration recently released a major report on the status of American women, filled with demographic data and sociological analysis. Seeking to place the report in a broader context, the Boisi Center invited three scholars with wide-ranging expertise in history, religion and culture to discuss the state of women—and feminism—in the United States today. The overflow crowd in Devlin Hall on April 26 attested to the wide interest in the topic as well as the esteem in which they held our speakers, Laurel Thatcher Ulrich, Lisa Sowle Cahill and Cynthia Young.

Ulrich, a feminist writer and historian who holds a prestigious university professorship at Harvard, framed her remarks around a comparison of the Obama report and its only predecessor, released by the Kennedy administration in 1963. Though most of the statistics had improved for women, some dramatically, Ulrich noted the continuity in the kind of work women do outside the home. Women continue to be concentrated in a small number of traditionally female occupations: secretaries, registered nurses, elementary school teachers, cashiers, and nursing aides. Not coincidentally, these are also some of the lowest-paying jobs in our economy. “Feminism isn’t about inspiring more female doctors,” she said. “It’s about fostering a society in which nurses are truly respected for the work they do.”

Lisa Cahill, Monan Professor of Theology at Boston College, spoke about the resources available to Catholic feminists—and, more broadly, Christian feminists—as they face the apparent disjunction between their desire for gender equality and their faith tradition’s teaching on gender inequality. She pointed to recent developments in feminist theology and Biblical interpretation (hermeneutics), to statements by Church leaders about gender complementarity, and most of all, to the growing awareness of the incredibly diverse experiences of women around the world. Women’s reflections on their own experience help to make Catholicism truly a “living tradition” that can remain vibrant and meaningful for women in all circumstances.

The final panelist was Cynthia Young, associate professor of English at Boston College and former director of BC’s program in African and African Diaspora Studies. Young began with an analysis of two iconic black women who, in many people’s eyes, have come to define the aspirations of African American women: Michelle Obama and Oprah Winfrey. Our culture’s focus on “the two O’s,” known for their fashion sensibility as much as their business prowess and philanthropic tendencies, is notable in part for what it obscures: the much more common plight of black women who face higher rates of domestic abuse, poverty and incarceration.

In the lively Q&A period that followed, panelists reflected on the media’s portrayal of women, the challenges of motherhood and the sometimes imposing generational gap that complicates any agreement about the priorities and concerns of American feminism. All agreed that while some women are indeed doing much better than ever before, many others are not; American women’s status varies enormously by race, class and religion, as it always has.

BOOKS AND ARTICLES BY THE PANELISTS

On Being is a public radio project delving into the human side of news stories + issues. In this post, Laurel Thatcher Ulrich's contribution to feminism is discussed.

Are College Campuses A Hostile Environment For Women? (April 2011)

How are American women doing today?

Gail Collins discusses the Obama administration's first report on the status of women in America in a recent op-ed: "Girls and Boys Together" (New York Times, 3/2/11).