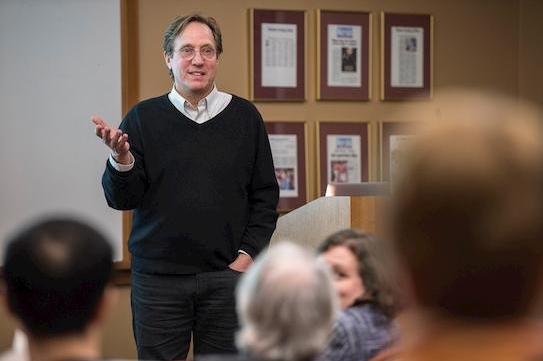 The process of “breaking” is at least as important as making, according to the artist and educator, Bruce Herman. Central to his artistic process is a willingness to risk loss of the image in pursuit of the most fitting and poignant expression. The Christian sacrament of the Eucharist is pivotal to Herman's own self-understanding as an artist. “This is My body, broken for you,” spoken by Christ before his betrayal and execution is a watchword. There is a costliness to the creative process that echoes this most costly of human deeds — laying down one’s life for one’s friends. Artists routinely expose their heart, their inmost self to scrutiny by others in hopes that visual meaning might be shared. This vulnerability is at the heart of the artistic act, and that necessarily involves a personal loss and breaking even as something new comes into being. The artist, like the one who invites the other into her dwelling place in an act of hospitality, welcomes the viewer to be judge and jury, and this central risk is where the meaning begins. Without this risk there is no meaning. Join Herman as he delivers a slide talk on his personal studio process and theological framework.

Bruce Herman (American, b. 1953) is a painter and educator living and working in Gloucester, Massachusetts. Herman holds the Lothlórien Distinguished Chair in Fine Arts at Gordon College where he has taught and curated exhibitions since 1984. He completed both undergraduate and graduate fine arts degrees at Boston University College of Fine Arts with graduate work under Philip Guston and James Weeks; he completed undergraduate work with David Aronson, Reed Kay and Arthur Polonsky.

Herman lectures widely and has published work in many books, journals, and popular magazines, most recently in Through Your Eyes (Wm. B. Eerdman Books). His artwork has been exhibited in many solo and group exhibitions in eleven major cities including Boston, New York, Chicago, Washington, D.C., and Los Angeles.

His work has been exhibited internationally, including in Kings College Chapel, Cambridge University; Hong Kong University; Palazzo Dei Sette in Orvieto, Italy; in Canada, Israel, and Japan. Herman’s art is featured in many public and private collections including the Vatican Museum of Modern Religious Art in Rome; the Cincinnati Museum of Fine Arts; DeCordova Museum in Lincoln, Massachusetts; the Hammer Museum, Grunwald Print Collection, Los Angeles; the Cape Ann Museum and in many university galleries throughout the United States and Canada.

More information about Herman and a gallery of his art can be found at: http://bruceherman.com. 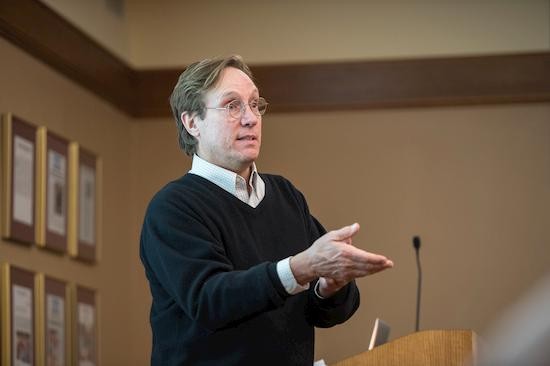 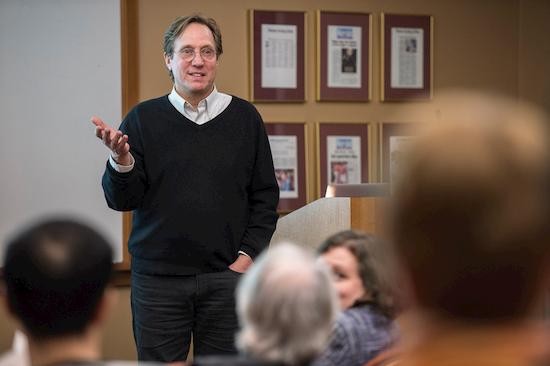 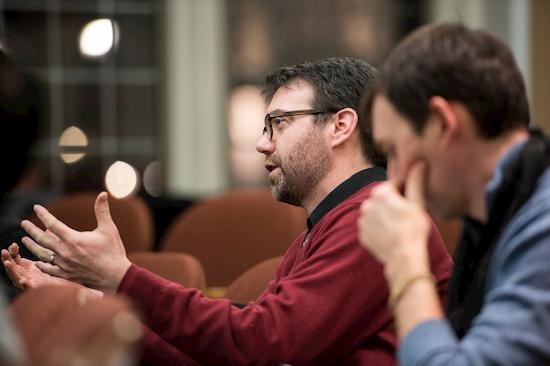 On February 17, Bruce Herman, the Lothlórien Distinguished Chair in Fine Arts at Gordon College, spoke and showed his art at a Boisi Center event titled, “Making and Breaking: Art, Hospitality and Eucharist.”

Many of Herman’s works include Christian themes, such as his series “Magnificat,” which is a meditation on the life of the Virgin Mary, and “Body Broken,” which commemorates Christian saints. One of his most recent works “QU4RTETS” — a collaborative exhibition and performance that also includes work by painter Makoto Fujimura, composer Christopher Theofanidis and theologian Jeremy Begbie — responds to T.S. Eliot’s poetic work, Four Quartets.

Herman’s physical studio process is emblematic of his theology. A convert to the Christian faith, Herman finds in the fundamental act of Christianity – Christ’s death on the cross – that good is born out of destruction. Salvation comes out of death. According to Herman, this can be analogous to making art. For Herman, the process of destruction in the studio is part of a creative exercise that leads to something new. Breaking art sometimes allows Herman to find new meaning, so after he finishes a work, he often scraps it and uses pieces of the original to create something new.

Georges Rouault and Max Beckmann, expressionist painters who responded to the horrors of World War I by expressing violence and horror in their artwork, deeply inf luence his work.

In his talk, Herman also connected his process to hospitality, explaining that the Greek word for symbol, an image or sign that contains meaning, was literally a token that homeowners would offer strangers to welcome them into their homes.

For Herman, making art is a two-way relationship between artist and viewer. The artist must welcome the viewer to take part in creating meaning out of the work. The viewer must entrust himself or herself to the artist and be open to being changed by the work. Herman acknowledged the risk for each party, but he thinks that is where the meaning of art lies.

Herman argued that the themes of Eucharist and hospitality are connected. To Christians, the Eucharist is a symbol of welcome, and that hospitality, made possible through Christ’s death, is a source of healing on Earth.

Herman, Bruce and G. Walter Hansen. Through Your Eyes: Dialogues on the Paintings of Bruce Herman. (Wm. B. Eerdmans Publishing Co., 2013).

Treier, Daniel J. and Mark Husbands. The Beauty of God: Theology and the Arts. (IVP Academic, 2007).

Sebastian Smee's article in The Boston Globe,  “A striking look at a long-ignored modern master."

A December 2015 article published by the Minnesota Public Radio explores how some Minnesotan artists incorporate their faith in their work. According to the MPR piece, "Faith can reveal the art of even the most mundane activities ... [and can] transform views shaped by religion." Local artist Hend Al Mansour writes, "My art speaks to my spirituality in trying to affirm [the] justice and the quality between genders."