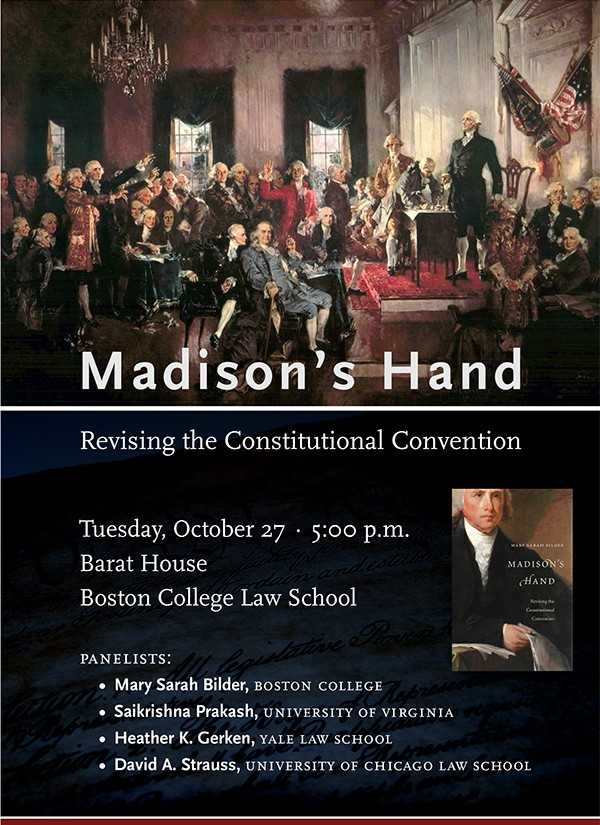 This talk will be based on ongoing work on Prof. Bilder's new book, Madison's Hand. Madison’s Hand begins with the question: Why did James Madison take notes at the Philadelphia Convention in 1787? Although Madison was not the only note-taker at the Convention, he was the only one to ensure that his detailed record of the Convention would appear in print—as well as when and in what manner. The book will explore the ways in which Madison’s notes and Madison himself mediate the Constitutional Convention and our historic understanding of the Constitution. 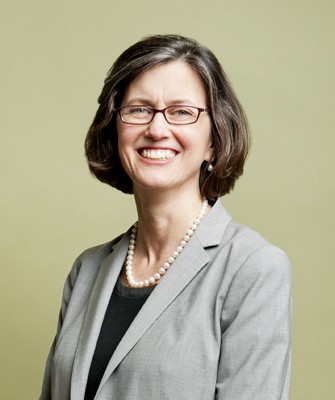 Professor Mary Sarah Bilder teaches in the areas of property and American legal and constitutional history at Boston College Law School. She received her B.A. and the Dean’s Prize from the University of Wisconsin at Madison, her J.D. (magna cum laude) from Harvard Law School and her A.M. and Ph.D. from Harvard University in the History of American Civilization. She was a law clerk to the Hon. Francis Murnaghan, Jr., U.S. Court of Appeals, Fourth Circuit. She writes primarily in the area of constitutionalism and colonial American legal culture. She was the Lucy G. Moses Visiting Professor at Columbia Law School in 2001 and was a visiting professor at Harvard Law School in the spring of 2008.

She is the author of The Transatlantic Constitution: Colonial Legal Culture and the Empire (Harvard University Press, 2004), awarded the Littleton-Griswold Award from the American Historical Association. Her articles appear in The Many Legalities of Early America, The Cambridge History of Law in America, and law reviews, including the Yale Law Journal, the Stanford Law Review, the Yale Journal of Law and the Humanities, and the Hastings Law Journal. She has received the Boston College Annual Prize for Scholarship, a Boston College Distinguished Research Award, a Mellon Fellowship in the Humanities, and is a Boston College Law School Fund Scholar. She currently serves on the Editorial Board of Law and History Review, the Council of the Colonial Society of Massachusetts, the Board of Overseers of the Massachusetts Supreme Judicial Court Historical Society, and is a member of the American Law Institute. 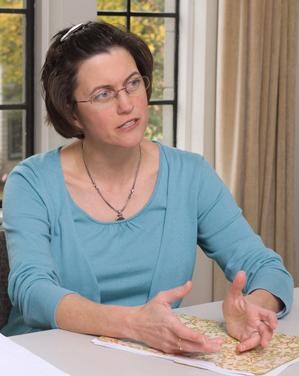 Mary Bilder at the Boisi Center 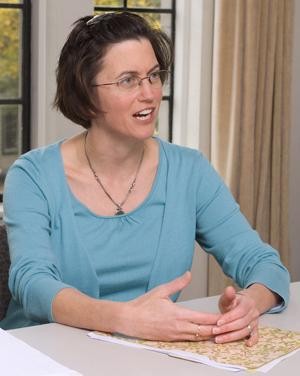 James Madison is known as the “father of the American Constitution” for his crucial role in drafting that document and its Bill of Rights. It is no surprise then that historians have traditionally considered his personal notes from the constitutional convention to be the most reliable source of information we have about the convention’s debates. But as Mary Sarah Bilder argued in a lively presentation on October 29, the notes produced by “Madison’s Hand” (the title of her forthcoming book on the subject) are much less spontaneous—and perhaps more interesting—than previously thought.

Professor Bilder, a legal historian at the Boston College Law School, said that she was inspired to write a book about Madison’s notes when she realized the discrepancy between the prevailing view of Madison’s notes—as minutes of the convention—and the reality that these notes were neither complete nor contemporaneous. To begin with, Bilder noted, the writing technology available to Madison prevented him from providing a transcript of the debates. Quill pens required constant re-inking, and modern shorthand script had not yet been developed; he simply could not have kept pace with the flow of conversation (let alone transcribe his own comments while speaking them).

Furthermore, Madison edited—and in some cases entirely rewrote—the notes he did take multiple times throughout his lifetime. He destroyed his “original,” contemporaneous, notes from the convention when re-writing them after the convention, and in subsequent iterations he added some material from the quasi-official record and removed other material that he thought might be offensive to those at the convention. Though Madison always insisted that his notes were his personal reflections, not an official transcript, historians would mistakenly come to treat them as such.