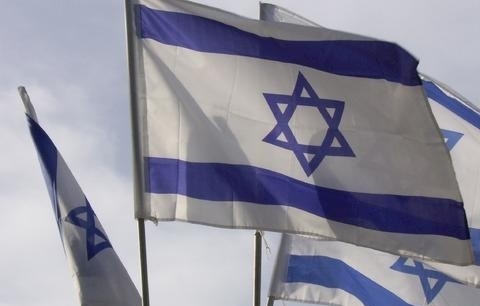 In Israel, military service is a context for the expression and inculcation of core societal values. One of Israel’s values is respect for diversity and religious pluralism. The Israel Defense Forces (IDF) is working hard to make itself an institution that embodies those ideals, while operating under public scrutiny. 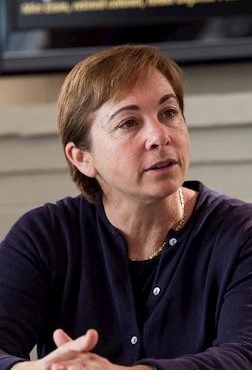 Colonel Miri Eisin (retired) served as deputy head of the combat intelligence corps, assistant to the director of Military Intelligence, and as an intelligence officer in combat and research units in the Israel Defense Forces. She served as the Israeli government spokesperson during the Second Lebanon War (2006), and as international press secretary to Prime Minister Ehud Olmert during the Annapolis process. She earned a B.A. from Tel Aviv University, an M.A. in security studies from Haifa University, and is a graduate of the Israeli National Defense College. She is currently working on her doctorate at Haifa University, writing about political narratives in post-modern conflicts. 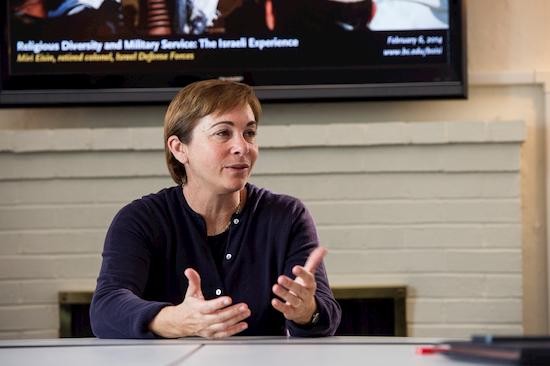 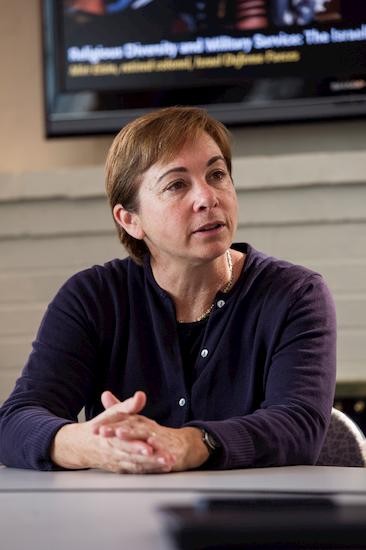 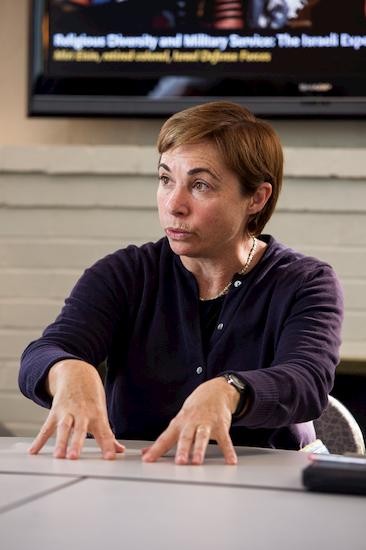 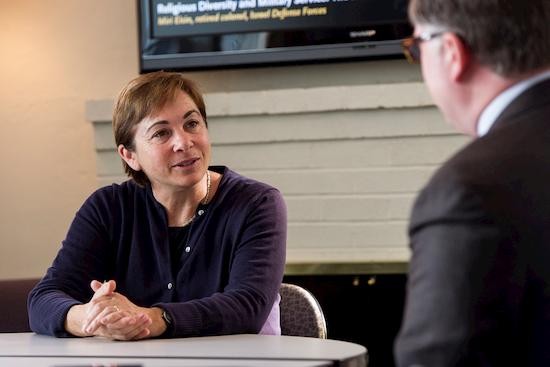 The Boisi Center’s second lunch event of the semester featured retired Israeli colonel Miri Eisin, who spoke about religious diversity in the Israeli army. In seeking to be both a liberal and a Jewish state with a diverse citizenry, Israel faces many instances of rights in conflict. Its military is a poignant microcosm: it is a place where Israeli society’s diverse components are able to interact intimately, and because of this, it can also highlight stark differences among its different groups.

Eisin explained that the military is comprised of Jewish, Christian, Druze, and Muslim Israelis. Most soldiers are conscripted, while some volunteer.  Accommodations are made for each group’s Sabbath and holy days. Non-Jewish soldiers serve alongside Jewish ones and can be found in all ranks.

Jewish Israelis differ by religiosity—secular, traditional, Modern Orthodox, and Ultra-Orthodox—as well as heritage. The main divisions along these latter lines are between those of European descent (Ashkenazi), Middle Eastern descent (Sephardi), Ethiopian descent, and the wave of immigrants in recent decades from the former Soviet Union.

Founded by secular Ashkenazim, the Israeli military has always been egalitarian.
Women have served and been considered equal to men. The military has also always been a place where new immigrants and the poorer segments of society are acculturated to Israeli society; the military is where “Israel tries to fix itself,” Eisin said.

Eisin worries, though, that the increasingly Orthodox nature of the military threatens its egalitarian character. The Modern Orthodox are disproportionately represented in the military. The Ultra-Orthodox are losing their exemption from military service, but are refusing to serve in close proximity with female soldiers and officers. These tensions highlight a difficulty in Israel’s identity as both a Jewish and modern liberal state.