Revolution of the Heart: The Dorothy Day Story

Revolution of the Heart: The Dorothy Day Story 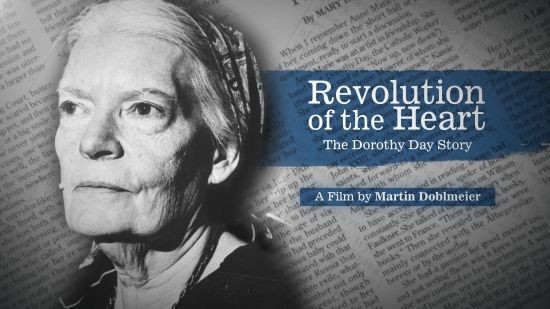 Dorothy Day has been called "the most interesting American Catholic of the 20th century," as well as anarchist, journalist, pacifist, and now candidate for sainthood in the Catholic Church. The Boisi Center is proud to screen Emmy Award winner Martin Doblmeier's new film, after which Doblmeier will discuss both his film and the figure of Day herself with Jeannine Hill Fletcher of Fordham University and Brianne Jacobs of Emmanuel College. 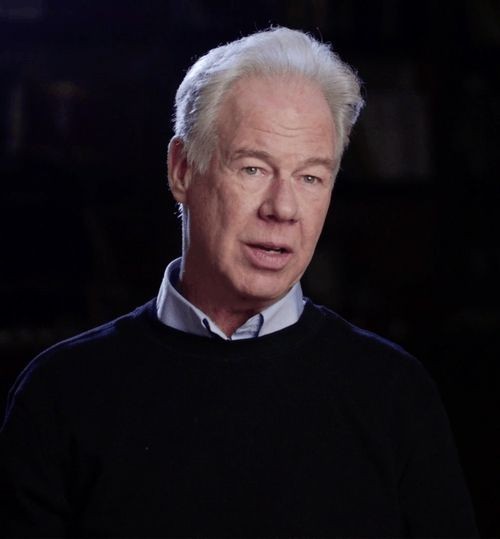 Martin Doblmeier is a filmmaker who has produced or directed over 30 films, mainly on the topics of religion, faith, and spirtuality. He holds degrees in Broadcast Journalism and Religious Studies plus three honorary degrees, and is the founder and president of Journey Films, a television and film company dedicated to those same topics. Journey Films has produced films for national broadcast and theatrical release, and recieved numerous awards including six Gabriel Awards and a regional Emmy for his film, Backs Against the Wall: The Howard Thurman Story. 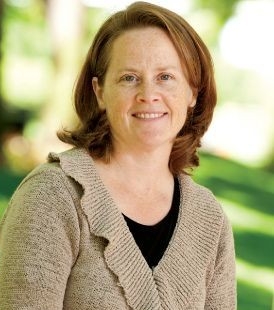 Jeannine Hill Fletcher is a professor of theology at Fordham University whose research is at the intersection of Catholic tradition and issues of diversity (including gender, race and religious diversity). Her most recent book is entitled, The Sin of White Supremacy: Christianity, Racism and Religious Diversity in America (Orbis, 2017). Hill Fletcher has a particular interest in the ways religious communities are mobilized for social transformation, and in November 2018, she served as expert witness in the evidentiary hearing for the federal trial of the Kings Bay Plowshares who continue Dorothy Day’s witness in anti-war activism. 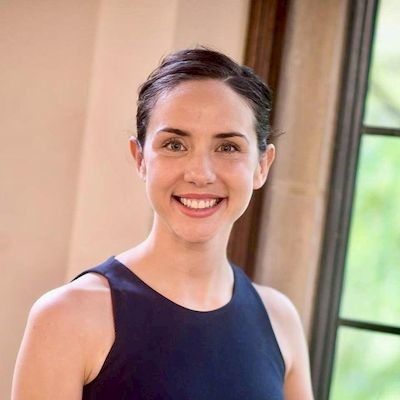 Brianne Jacobs, assistant professor of theology and religious studies at Emmanuel College, is a Catholic feminist theologian, interested in engaging the resources of the Catholic intellectual tradition to work for gender justice and flourishing. Her research focuses on the body as a site for reflection on ecclesiology, ethics, faith, and gender and racial justice. She is the author of many articles including, "An Alternative to Gender Complementarity" in Theological Studies, and “What Does Catholic Social Teaching Tell Us About Sexual Harassment?” in America Magazine. Her book, Holy Body: Gender Flourishing in Theological Anthropology and Ecclesiology is forthcoming with Fortress Press. 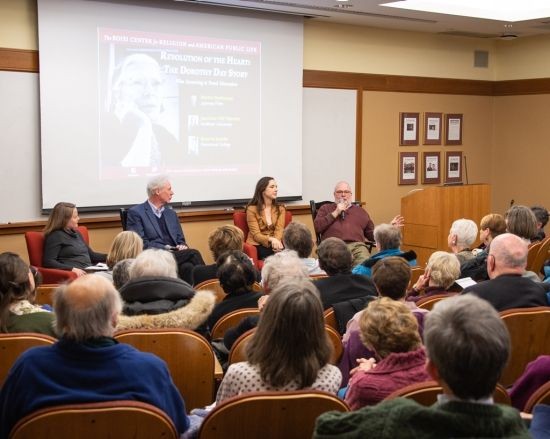 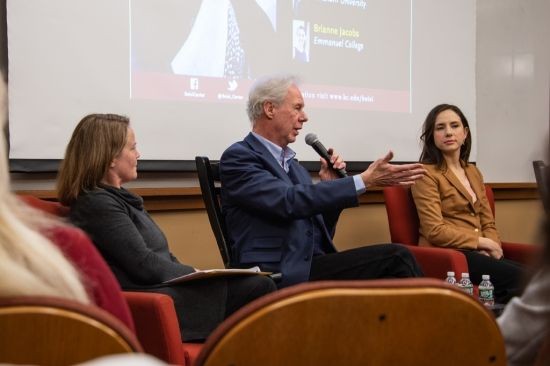 On January 22nd, the Boisi Center hosted a screening of Journey Films’ most recent documentary, “Revolution of the Heart: The Dorothy Day Story.” The screening was followed by a panel discussion featuring Martin Doblmeier, the filmmaker and president of Journey Films; Jeannine Hill Fletcher, professor of theology at Fordham University; and Brianne Jacobs, assistant professor of theology at Emmanuel College.

The film, covering the breadth of her life, featured a series of vignettes that served to tell the story of how Dorothy Day was drawn first into advocating for peace, workers rights, and the poor and later into the founding of one of U.S. Catholicism’s most significant outreach movements, the Catholic Worker. From her upbringing in a journalist’s home, she, too, took up the occupation. It landed her on the front lines of events and protests influenced by Communists and Socialists, groups to which she was sympathetic. Her reporting led her into advocacy herself, which resulted in her being often jailed, first while demonstrating for suffrage in Washington, D.C. While in jail in D.C., she read the Psalms, just one example of her interest in religion, which would finally come to fruition in her becoming Catholic--but not before baptizing her daughter, Tamar, even before she herself was a member of the faith tradition. As a Catholic during the Depression, she wondered where the Church was taking up its biblical call to feed the hungry and clothe the naked and what her role might be in that. Her prayer was answered in Peter Maurin, who introduced her to Catholic Social Teaching and challenged her to view poverty as a gift to be taken up voluntarily.  Under his influence, Day began the Catholic Worker newspaper, whose readership exploded in the early years of its publication.  She was soon thereafter challenged by a reader of the Catholic Worker who, after showing up on her doorstep, asked why she wasn’t feeding the hungry herself if that’s what she wrote about--the birth of Houses of Hospitality immediately followed this encounter. Not without controversy--the Catholic Worker published articles challenging the justness of World War II and later Vietnam, which landed her under the watchful eye of U.S. intelligence for Communist activity as well as the recipient of the ire of more uncritically patriotic Americans--the Catholic Worker stood on its principles to grow from thirty Houses of Hospitality at her death in 1980 to 250 today. In 2000, Day was named “Servant of God” in the first step toward canonization as a saint--a title she emphatically resisted--and was recognized by Pope Francis as one of the four most influential persons in the U.S. in his 2015 speech to the joint meeting of Congress.

Following the screening, panelists engaged in a lively discussion. In it, Doblmeier discussed the challenge of filmmaking, especially in the Prophetic Voices series of which this film is a part, and the need to cater to a mixed audience in which some are completely unfamiliar with Dorothy Day while others know a lot but wish to know more.

Hill Fletcher commented on Dorothy Day’s lasting influence and how she should inspire us to cross lines and surpass barriers the way Day did in her work for justice. Her potential canonization affirms this challenge, and it should draw our attention to the importance of charity in justice. Jacobs argued that Day provides a powerful idea of what it means, particularly as a woman, to say yes to God and live in relation to God in the modern world.

Jacobs then asked Doblemeier what he might want viewers to reconsider about today’s world in light of Day’s story. He responded that the most relevant term he could think of was “authenticity.” He highlighted that in a world of hypocrisy, Day’s authenticity should be an example.

Q&A with the audience followed the panel discussion, in which Doblmeier touched upon the connection he felt to Day’s granddaughters while working on the film. Two of them, Kate and Martha, appeared in the film. One is a writer and another a staunch activist. He remarked that, for him, they embody two important dimensions of Day’s legacy--they are two sides of the “Dorothy Day coin.”

An audience member asked whether the panelists could explain Day’s choice of Catholicism, as opposed to other faith traditions that might be more sympathetic to her involvement in the church as a woman or to her work for justice.  Jacobs noted in response that Day was likely drawn to Catholicism because of its image of the mystical body of Christ, which she saw as profoundly experienced by the Eucharist and mirrored in her work. Through the Eucharist, Day found the inspiration to bring those around her together through service.

Finally, Doblmeier noted that being a biographer is a “humbling” experience. He shared that Day scares him because she challenges him to live with greater intensity. He also noted, however, that this was the goal of his work--he would not create any but the kinds of films that scare us into being the people we ought to be.

Hennessy, Kate. Dorothy Day: The World Will Be Saved by Beauty: An Intimate Portrait of My Grandmother.  New York: Scribner, 2017.

Conversation about the potential canonization of Dorothy Day has been going on for decades. In 2016, Cardinal Timothy Dolan of New York announced that the official canonical inquiry of Day would begin. Critics who argue against her canonization often recite Day's famous words, "Don't call me a saint, I don't want to be dismissed that easily."  Of course, those who support the process respond that such a statement only strengthens her case.

This article from Crux argues that, while her “canonization process is still far from the finish line . . . that doesn’t mean she isn’t influencing lives today.”