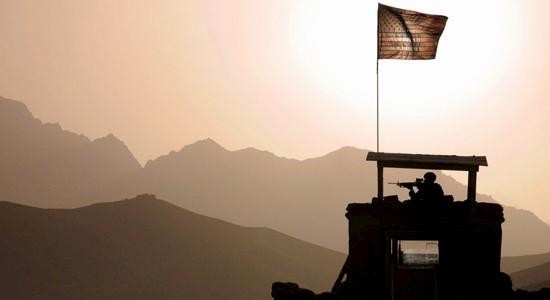 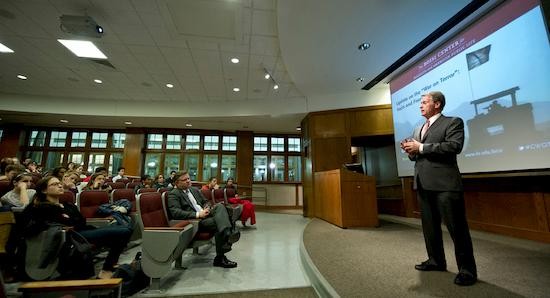 Former CIA agent Glenn Carle addresses the Boston College community and lectures on recent developments in the 'War on Terror.' 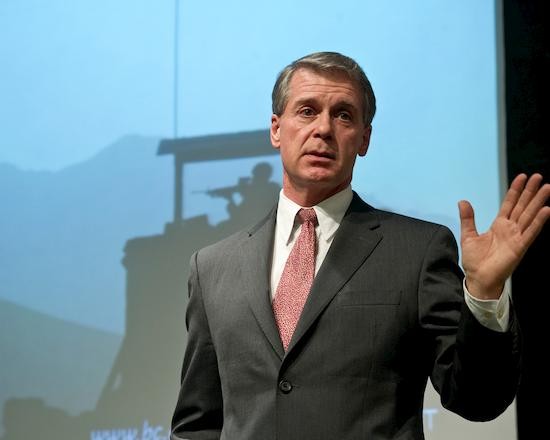 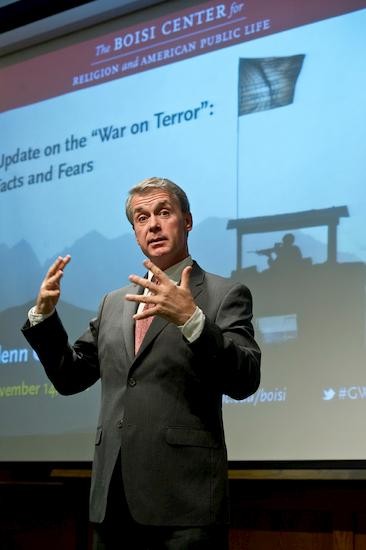 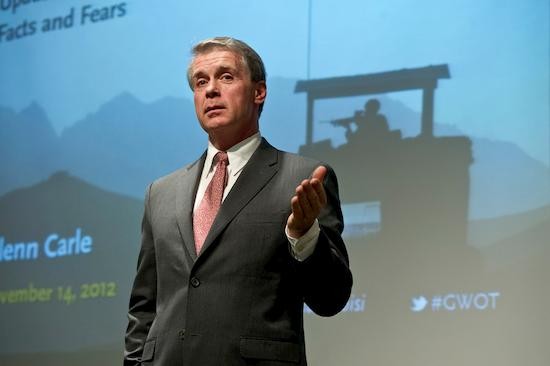 A 23-year veteran of the Central Intelligence Agency’s clandestine services, Glenn Carle retired in 2007 as the Deputy National Intelligence Officer for Transnational Threats. Having spoken at the Boisi Center about interrogation policy a year earlier, Carle returned on November 14 to discuss the current state of the “Global War on Terror,” or GWOT, to a packed room in Fulton Hall. He centered his talk on a discussion of two “fears” and four “facts.”

The first widespread fear, stoked by the government and media alike, Carle said, is that al Qaeda is a coherent global organization with operations in up to eighty countries, when in reality it is dangerous but only fully operational in six countries. The second fear driving the GWOT is nuclear terrorism, but Carle said the odds of terrorists stealing a major nuclear weapon or constructing one themselves is “infinitesimal.”

Four facts are key to understanding the current context, Carle noted. First, al Qaeda is a relatively small organization with goals quite distinct from Hamas, the Taliban and other terrorist organizations; and we know that it has been “decimated” by U.S. attacks in the last decade. “It’s hard to be a terrorist,” Carle told the audience. “The life expectancy is short and there aren’t a lot of places to go.” Second, the FBI has aggressively sought and prosecuted would-be terrorists in the U.S., even when the planning was not yet operational. Third, globalization and modernization are the root causes of Glenn Carle modern terrorism, so the long-term solution is not to “win” the GWOT but to help societies manage these structural transformations. Fourth, said Carle, the Obama administration has been ruthless in its use of drones but quite nuanced in its assessment of different terrorist organizations.

Carle closed by arguing that the idea of a unified GWOT was a fiction that is now properly put to rest. We are currently engaged in an aggressive counter-terrorism campaign that targets individual terrorist operatives, he said, but our long-term interests are best met by fostering economic and social opportunities for women and broad economic growth that makes particular populations less vulnerable to terrorist influences.

Glenn Carle discusses the CIA's interrogation methods during the War on Terror and the upcoming Senate bill on intellignce practices.

A shocking and intimate look at the world of espionage that leads readers through the underworld of the Global War on Terror, asking them to consider the professional and personal challenges faced by an intelligence officer during a time of war, and the unimaginable ways in which war alters our institutions and American society.

Are drones a "huamne way" to fight an "irregular enemy" as many senior officials assert? The growing number of civilian deaths and amount of collateral damage would suggest otherwise.

Hanif, Mohammad. "The Tailban's Main Fear is Not Drones but Educated Girls."  The Gaurdian. November 4, 2012.

In Pakistan and elsewhere an educated female population is the primary threat to the Taliban's interests.

Glenn Garle discusses how the CIA has evolved in its practices and purpose since the agency's inception in 1947.