The concept of diaspora is increasingly popular in academic, political, and cultural usage. But what does it mean? This talk examines the origins of diaspora as a concept, its changing meanings over time, its current popularity, and its strengths and limitations, with examples drawn from Jewish, African, Irish, and Asian history. 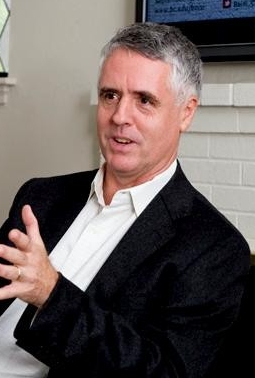 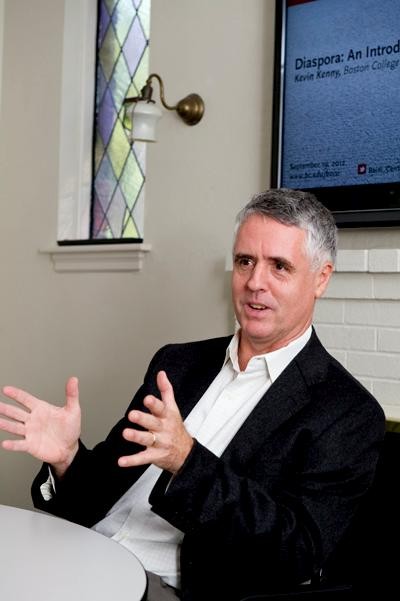 Kevin Kenny, professor of History at Boston College, at the Boisi Center on September 19, 2012. 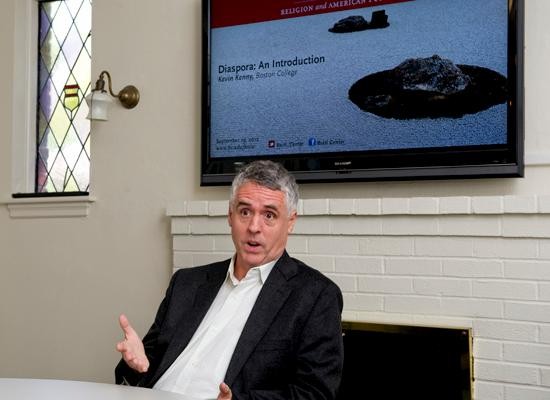 Diaspora is a Greek term that describes a scattering or dispersion of people from their ancestral homeland. When the Hebrew Bible was translated into Greek, the term was used to describe the population of Jews forced into exile during the Babylonian captivity, and the concept of “diaspora” thus took on theological significance. In the last fifty years, however, the term has been embraced by (or simply applied to) other groups who have been separated from their homeland voluntarily or involuntarily. To understand these new developments and their implications for contemporary social and political thought, the Boisi Center invited Kevin Kenny, professor of history at BC and author of the forthcoming Diaspora: An Introduction, to speak on September 19 about his research on the issue.

Kenny offered a rich historical account of how the concept of diaspora proliferated among scholars and non-scholars alike in the twentieth century. From the displacement caused by the Irish potato famine to the forced removal and enslavement of Africans in the Americas, the concept has now expanded to include the movement of people related to decolonization, international refugees, and other political and economic migratory circumstances. Today’s global diasporas may involve interconnected communities around the world tied together by a common heritage who may or may not focus on a return to that original place. Kenny argued that while the term has sometimes been stretched beyond its limits, it nevertheless has great value in helping us understand the relations of people and places.

Amrith, Sunil S. Migration and Diaspora in Modern Asia. (Cambridge University Press, 2010).
Sunil Amrith surveys and analyzes Asian migration over the last 150 years. Whereas most previous historians concentrated on the migration of Asian workers to the Americas, Amrith focuses on those who moved within rather than beyond the Asian continent – the vast majority.

Aviv, Caryn and David Shneer. New Jews: The End of the Jewish Diaspora. (New York University Press, 2005).
An argument against the description of non-Israeli Jews to the category of “diasporic,” suggesting that “global Jews” would be a more accurate term for those who live in places such as San Francisco, Buenos Aires, Moscow, New York, and Berlin.

Boyarin, Daniel and Jonathan. “Diaspora: Generation and the Ground of Jewish Identity.” Critical Inquiry, 19. Summer 1993.
A sweeping historical survey, based on a distinction between Pauline universalism and Jewish traditions of particularism, culminating in a critique of Zionism and a defense of the idea of diasporic cultures.

Baumann, Martin. “Diaspora: Genealogies of Semantics and Transcultural Comparison.” Numen 47.3. 2000.
An etymological analysis of the term “diaspora” – its Greek origins, its use in the Septuagint, its relation to the Hebrew terms gola and galut, the proliferation of meaning since the 1960s, and the utility of the concept in transnational and comparative scholarship today.

Brubaker, Rogers. “The ‘Diaspora’ Diaspora.” Ethnic and Racial Studies 28.1. 2005.
An argument that diaspora is best seen not as a social entity that can be measured but as a stance or perspective. Both a category of critical analysis and a category of everyday practice.

Clifford, James. “Diasporas.” Cultural Anthropology 9, 1994.
A classic argument on diaspora as a form of discourse and an argument against typologies that seek to define diaspora according to fixed criteria.

Gitelman, Zvi. “The Decline of the Diaspora Jewish Nation: Boundaries, Content, and Jewish Identity.” Jewish Social Studies, New Series, 4. Winter 1998.
An argument that, while Zionism succeeded in creating a nation and a state in Israel, Jews in “the diaspora” have an ethnic rather than national identity. Like the identity of most other migrant groups as they acculturate in their host countries, he finds, this identity is losing substance and eroding into “symbolic ethnicity.”

Kenny, Kevin. 10 things to understand about diaspora. Oxford University Press Blog, June 28th, 2013.
To learn more about diasporas around the world, OUP asked Kevin Kenny, Professor of History at Boston College and author of Diaspora: A very Short Introduction to share some of his extensive knowledge.

Kenny, Kevin. Diaspora: A Very Short Introduction. (Oxford University Press, 2013).
An examination of the origins of diaspora as a concept, its changing meanings over time, its current popularity, and its utility in explaining the history of human migration. Mediating between the various sociological and cultural definitions currently in use, Kenny proposes a flexible approach that yields insights into the nature of population movements, the connections migrants form abroad, and the idea of return to a homeland.

Knott, Kim and Seán McLoughlin, eds. Diasporas: Concepts, Intersections, and Identities. (Zed Books, 2010).
A series of forty-four short essays on the meaning of diaspora and its various uses by scholars. The essays are arranged into three sections, covering definitions, concepts, and theories; questions of culture, race, and gender; and empirical studies.

Sheffer, Gabriel. Diaspora Politics: At Home Abroad. (Cambridge University Press, 2003).
An analysis of the efforts of ethno-national groups to maintain social, cultural, and especially political, contact with their homelands.

Tölölyan, Khachig. “Rethinking Diaspora(s): Stateless Power in the Transnational Moment.” Diaspora: A Journal of Transnational Studies 5. Spring 1996.
Tölölyan reflects on the reasons why the concept of diaspora has proliferated in recent decades.