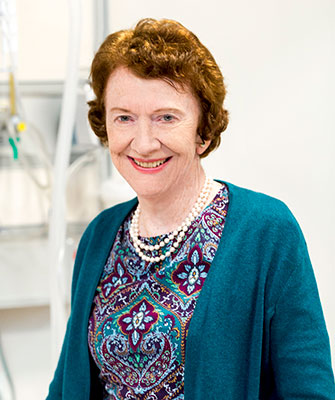 Ann Wolbert Burgess, D.N.Sc., APRN, FAAN, is an internationally recognized pioneer in the assessment and treatment of victims of trauma and abuse. She has received numerous honors including the Sigma Theta Tau International Audrey Hepburn Award, the American Nurses’ Association Hildegard Peplau Award, and the Sigma Theta Tau International Episteme Laureate Award. Her courtroom testimony has been described as “groundbreaking,” and she has been called a “nursing pathfinder.” She has been designated a “Living Legend” by the American Academy of Nursing, the academy’s highest honor.
Her research with victims began when she co-founded, with Boston College sociologist Lynda Lytle Holmstrom, one of the first hospital-based crisis counseling programs at Boston City Hospital. She then worked with FBI Academy special agents to study serial offenders, and the links between child abuse, juvenile delinquency, and subsequent perpetration. Her work with Boston College nursing colleague Carol Hartman led to the study of very young victims and the impact of trauma on their growth and development, their families and communities. Her work continues in the study of elder abuse in nursing homes, cyberstalking, and Internet sex crimes.