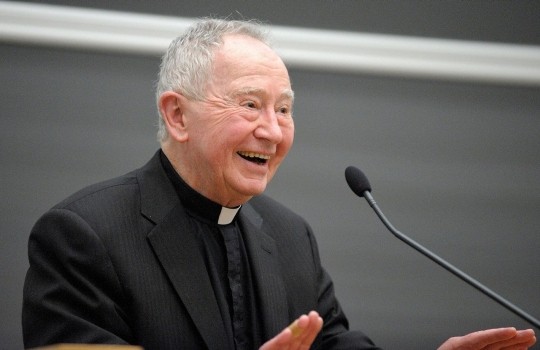 On October 3, 2017, John O’Malley, S.J., University Professor in the theology department at Georgetown University, delivered the third annual Feore Family Lecture on Jesuit Studies entitled “Past, Present, and Future of Jesuit Studies: Historiographical Thoughts.” O’Malley was presented the George E. Ganss, S.J., Award in Jesuit Studies in recognition of his significant scholarly contributions to the field.

A specialist of the religious culture in early modern Europe, O’Malley has published several prize-winning books, including The First Jesuits (Harvard University Press, 1993), which has been translated into twelve languages, and The Jesuits: A History from Ignatius to the Present (Rowman & Littlefield, 2014), already available in seven languages. A collection of his work (Saints or Devils Incarnate?: Studies in Jesuit History) inaugurated the Jesuit Studies book series at Brill in 2013. O’Malley has also served as editor or co-editor of The Jesuits and the Arts (Saint Joseph’s University Press, 2005), two volumes on Jesuit culture, sciences, and the arts (University of Toronto Press, 1999 and 2005), and Art, Controversy, and the Jesuits: The Imago primi saeculi (1640) (Saint Joseph's University Press, 2015), among other titles of the series he himself edits. 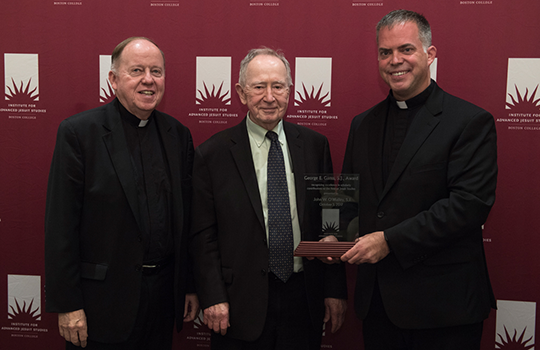 Born in Tiltonsville, Ohio in 1927, O’Malley earned a doctorate in history from Harvard University in 1965. He taught as a faculty member at the University of Detroit before serving as a professor of church history at the Weston Jesuit School of Theology in Cambridge, Massachusetts. O’Malley has also held visiting professorships at Harvard University, the University of Michigan, Boston College, Fordham University, and Oxford University. He has received fellowships from the American Academy of Arts and Sciences, the American Academy in Rome (Prix de Rome), the Guggenheim Foundation, the National Endowment for the Humanities, the American Council of Learned Societies, and other academic organizations around the world. He has received lifetime achievement awards from the Society for Italian Historical Studies, the Renaissance Society of America, and the American Catholic Historical Association.

The Journal of Jesuit Studies published a revised version of O’Malley’s Feore Lecture. The full text is available online.