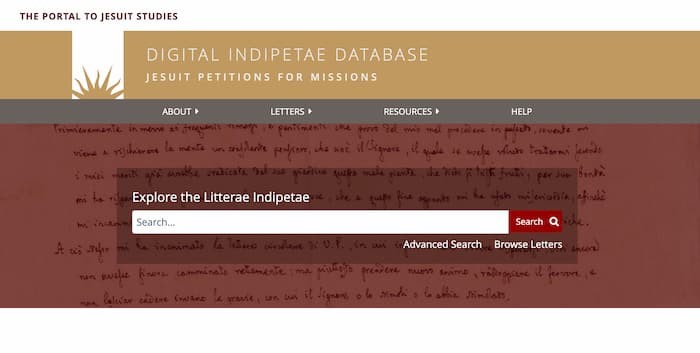 The indipetae were letters written by Jesuits to their Superior General in application for the extra-European missions, usually called the “Indies.” In Latin, applying for the Indies was petere Indias; from this are derived the expressions indipetae (the letters) and indipeti (the applicants). After the Suppression (1773) and the Restoration (1814) of the Society of Jesus, the tradition of writing these petitions continued.

Now available as an open access resource, the Digital Indipetae Database collects the indipetae of both the Old and the New Society. Users can search the letters by a number of facets — the full text, a sender’s name or location, the date a letter was sent, the destination desired, and the names of saints quoted among the others. The database also hosts scans of the original letters that are housed at the Archivum Romanum Societatis Iesu and other Jesuit archives. The public launch of the database took place at a Jesuit Studies Café on March 26, 2020.

The letters and metadata in the Digital Indipetae Database are aggregated within the search capabilities of the Portal to Jesuit Studies.