Ben Smith, a former NHL player who won the Stanley Cup in 2013 and played at Boston College from 2006–2010, returned to BC to get the tools and knowledge he needed for the next step on his professional journey. Completing the majority of the master’s degree program in Global Perspectives: Teaching, Curriculum, and Learning Environments from Europe, Smith praised the flexibility, sense of community, and the people as high points of the program. 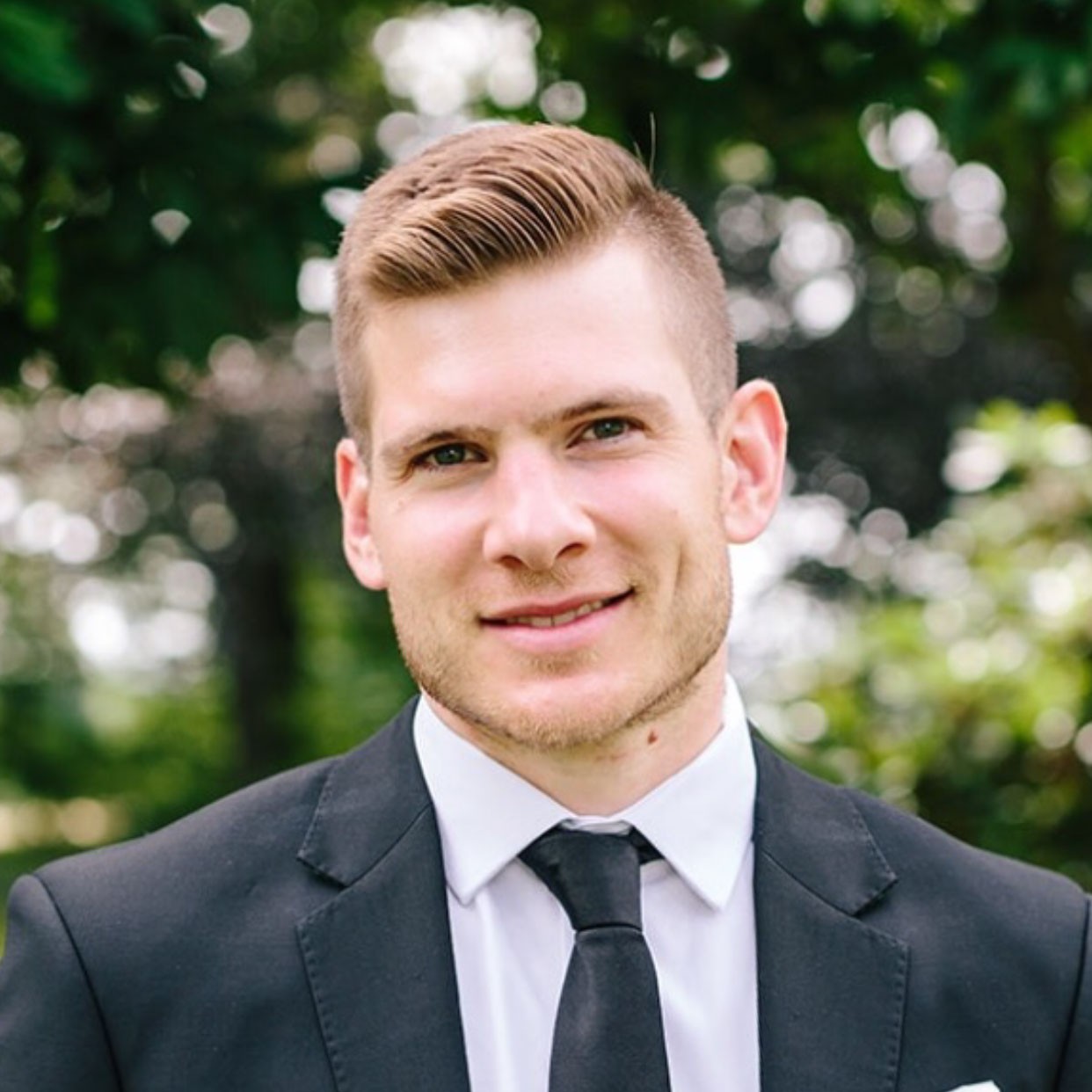 Q:    What brought you back to Boston College?

I went to a prep school and it was a positive educational experience that had a lasting impact on me. I loved the community and I always pictured myself returning to that type of environment. As someone who pursued athletics professionally after college, I’ve found that there are components of mentoring that come with playing on a team that resemble an aspect of teaching, and those resonate with me. I’ve always enjoyed mentoring younger teammates and being a team leader is something I regularly strive towards.

Once my playing days are over, I plan to look toward education or coaching as a natural second career. In exploring that possibility, I found an online program that was starting up at my alma mater, Boston College. I love BC and, truth be told, if I had an opportunity to be a “double Eagle,” I wanted to jump on it. And sure enough, I found a program that worked for my lifestyle and current situation, living and playing hockey in Europe.

Q:    Talk a bit about your career goals that drove you to the Lynch School of Education and Human Development?

Broadly speaking, one career goal has always been to have an impact on others. That’s been a goal of mine while playing hockey professionally and it’s something that I want to continue striving for after I’m done. Whether that’s as a coach or as a teacher and an advisor. I think there’s a lot of different avenues that I can take. And the Lynch School has been instrumental in setting myself up to pursue a number of paths once I hang up my skates.

Q:    What were some of the most valuable takeaways or personal developments you’ve had as a result of attending the Lynch School?

For me, I’ve really valued becoming more aware of skills and my deficiencies, both as a human and as an educator. Working alongside so many people at the Lynch School who have dedicated their careers to education, I realize now more than ever that I have a responsibility to give back. There’s a huge emphasis on the social justice aspect of education at the Lynch School and that’s something that really stuck with me. I’m excited to tackle some of the issues we have in our society. I know I’m just one person, but I think that the more people that we have that are aware of these issues that exist in American society, embracing the challenges that they pose and looking at them straight in the face and tackling them head-on, that can only lead to progress. That mentality is something I can bring with me wherever I land. For someone with a non-traditional background in education, there was a struggle relating certain aspects of what I was learning to my own experiences. But through the help of my professors, my advisor, and my network of peers, I was able to make connections about the application of what I was learning and that opened my eyes to seeing aspects of education differently.

“Working alongside so many people at the Lynch School who have dedicated their careers to education, I realize now—more than ever—that I have a responsibility to give back.”

Q:    What are some of the professional advantages that the Lynch School provided?

The Lynch School and Boston College have a great reputation in the education world, so that’s one clear advantage. On top of that, the Lynch School has a strong network that helps students navigate the professional world after you earn your degree and alerts you to the opportunities and avenues that will deliver you to your career goals.

Q:    How did the mission of the Lynch School and BC speak to you and your interests, and ultimately aid your growth as an educator?

The classes that I embraced the most were the ones that examined the development of the whole person, looking beyond the classroom. This question and quest to discover how to encourage global citizenship—nurturing people that really care about others around the world, exploring how people treat each other—that vantage point that looked at education on a broader scale definitely spoke to me.

Q:    What aspects of the Lynch School will excite prospective students?

The people, the professors, and the sense of community at the Lynch School that exists between them all were incredible. It’s a strong community, even within the online program. There were plenty of memorable, theoretical conversations that you don’t have in everyday life. For me, it was refreshing to go from hockey practice then dive right into a live session with my class at the Lynch School where we considered issues facing the world. Hearing the different perspectives of my classmates and learning what someone teaching in South Korea or in Kenya or Boston may have to say about a given issue was fascinating. That’s one thing that’s really cool about the Lynch School and your classmates there: you’re located all over the globe but you still have the ability to come together and communicate about a range of topics. With everything going on in the world with COVID, it was amazing to have that space for reflection and discussion, whether it’s about racial injustice or loneliness.

“The Lynch School has a strong network that helps students navigate the professional world after you earn your degree and alerts you to the opportunities and avenues that will deliver you to your career goals.”

Q:    Can you talk a bit more about the Lynch School’s focus on making space for personal and professional reflection as part of its mission?

Having been out of school for 10 years, I don’t really give myself a lot of time to reflect on what is going on, outside what’s immediately in front of or behind me. The element of reflection, which is part of BC’s Jesuit mission, was fascinating. Whether you’re in a live session, interacting with another person, or on a Google Doc putting your thoughts into words, hearing what other people have to say about a given issue and how it ties to their experiences is eye-opening. It encourages you to consider what others are going through or what kind of obstacles other people are navigating. And it really helps you to see the bigger picture. The reflection at the Lynch School helped me consider what I can bring to the table, and how I can address some issues in my life or introduce change into my own community.

Q:    How would you describe interactions with the faculty, and the relationships forged with your professors?

Always very attentive and responsive. One of the things I was most impressed with was how responsive each of my professors was regarding emails. I always got a response from a professor or teaching assistant within a few hours, and that was always helpful, especially when working remotely and on another continent and in a different time zone. My professors at the Lynch School were also understanding and worked with me when outside obligations made attending a live session or turning an assignment in on time challenging. I also appreciated the feedback from faculty, challenging me when I needed it or when there was an opposing viewpoint to my own that was worth considering.

Q:    What was your favorite course at the Lynch School?

I think my favorite course was Preparing the Whole Person for Global Citizenship, with Professor Belle Liang. A lot of that course had to do with shaping global citizens, and thinking of that in a way that doesn’t focus on purely academic learning. Instead, it took a more global, universal approach, asking the questions “How do you form ‘good’ people? How do you shape people who are inspired to make a difference in the world?” For me, that’s what I’m most interested in so it was fascinating to think of the various ways to inspire global citizenship.

Q:    Tell me more about your peers at the Lynch School.

So often, I found myself in live sessions or group meetings with my Lynch School classmates, thinking, Wow, the people I’m in class with—they’re inspiring! They already have such exciting careers and they have passions and interests and yet they came here because they want to continue to learn and grow. For me, taking time to observe my peers and learn from them was both inspirational and incredibly informative.

Q:    What is your advice to someone who is about to start this degree program, but doesn’t have a lot of formal classroom experience?

It’s OK if you don’t have the formal classroom experience of your classmates—I certainly didn’t. But in the end, I feel as if I got just as much out of my time at the Lynch School as my peers. So my advice here would be to soak it all in. And jump in, 100 percent, and enjoy it. If you don’t have as much formal experience working in the educational world as others, I recommend you use the resources that are there for you. And I’m sure you’ll be inspired by something or someone, by a classmate or by a professor or a dean, and you’ll find a path that really lights you on fire.

That was such a cool thing about the Global Perspectives program: the students came from all over the world because the program was all online. And not everyone was an educator, right. Most were educators in some sense, but several of us were not classroom teachers. There are people from all different types of backgrounds. Ultimately, I believe anyone who is thoughtful and works hard can thrive at the Lynch School.