How to defeat white nationalism 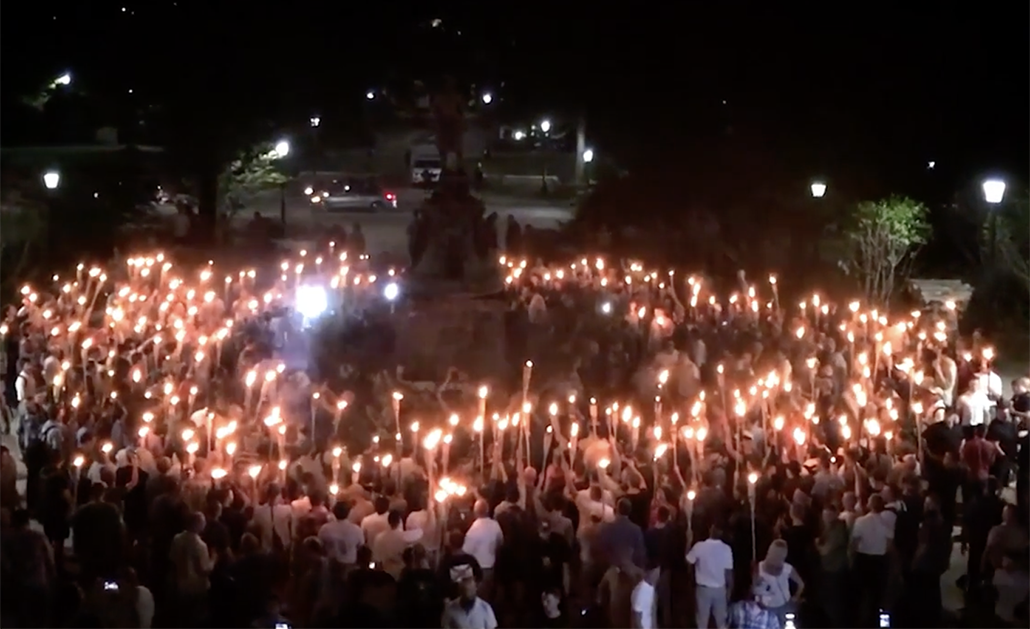 People hold torches at the Unite the Right Rally in Charlottesville in 2017. Screenshot from White Noise.

The ideas unleashed by the “alt-right” are here to stay, according to Daniel Lombroso, a filmmaker who chronicled the rise of the white nationalist movement in his 2020 documentary White Noise. But people who champion diversity, Lombroso added, have the potential to counteract the power of far-right extremists, who have killed more people in the U.S. than Islamic extremists since 9/11.

“We have a chance to share power across so many different ethnic groups,” he said Tuesday in a webinar sponsored by the Boston College Forum on Racial Justice in America and the School of Social Work. “I think we’re in this unique historical moment where we may or may not become a multiracial democracy, and I think that’s something that people could really rally around.”

Lombroso joined a social worker, a psychologist, and a researcher who studies extremist groups to discuss his film, which exposes the roots of the “alt-right” by focusing on three of its main proponents. Although the movement has disappeared from public view over the past few years, its primary players have influenced the beliefs of millions of people, he said, and “shaped their perspective on the world.”

Lombroso told students, faculty, and staff at BC that critics of the “alt-right” should take a page out of the playbook of the movement to tell a compelling story that touts the value of diversity and inclusion. The subjects of his film—Mike Cernovich, Lauren Southern, and Richard Spencer—harness the power of social media to connect with millions of like-minded people who believe that “white identity” is under attack by multicultural forces. Champions of diversity, on the other hand, could craft a narrative that promotes the integration of different cultures and perspectives among people who believe that everyone should be equal under the law.

“When you meet the subjects in the movie, it’s almost like they’re drunk. They’re intoxicated. They’ve bought into this world view so much that they feel found and liberated from their depression, or anxiety, or whatever it is that they’re feeling. Obviously, they’re finding a sense of purpose and community in the worst possible place, but it shows that it’s possible to achieve that,” Lombroso said. “I think it’s on people who believe in multiculturalism to mirror what the ‘alt-right’ did and try to create a story for people who believe in a multicultural America.”

“I think we’re in this unique historical moment where we may or may not become a multiracial democracy, and I think that’s something that people could really rally around.”

White Noise, produced by The Atlantic and available to watch through University Libraries, captured some of the key moments that catapulted the “alt-right” into the national spotlight. In 2016, Lombroso followed Spencer to a far-right conference in Washington, D.C., where he said “for us, it is conquer or die,” and Donald Trump supporters broke out into Nazi salutes. In 2017, Lombroso joined Spencer at his Unite the Right rally in Charlottesville, which turned deadly when a 20-year-old man drove his car into a crowd of counter-protesters.

Writing for The Boston Globe, Lombroso reported that Spencer “somehow couldn’t see how his rhetoric of calls to ‘conquer or die’ caused violence.” But Emily Kaufman, who monitors, exposes, and disrupts extremist threats for the Anti-Defamation League’s Center on Extremism, said his film shows how hateful rhetoric can spark horrific brutality.

“One thing that really struck me was how each individual featured really tried to remove themselves from responsibility for actions that they took,” she said in the webinar, which was hosted by Samuel Bradley Jr., an assistant professor in the School of Social Work who curated questions from attendees and posed them to the panelists throughout the event. “They didn’t see that their rhetoric could be aligned with the action of someone else.”

Kaufman said that the Capitol riot on Jan. 6 was the result of years of hateful rhetoric from the far-right. She suggested that far-right extremists inspired violence among people who had no direct connection to their groups, pointing out that only about 25 percent of the people who have been arrested for participating in the riot belonged to far-right movements like the Proud Boys and the Oath Keepers.

“These people were motivated by something else,” she said. “They weren’t being fed by extremist ideology necessarily, but the climate of escalating rhetoric in this country really made it seem like it was incumbent upon them to act in order to defend their country.”

Lombroso noted that far-right extremists have killed dozens of people over the past four years, including 11 Jews at a synagogue in Pittsburgh, 51 Muslims at a pair of mosques in New Zealand, and 22 people at a Walmart in El Paso, Texas. The perpetrators were often young, white men who, he said, embraced the Great Replacement, a conspiracy theory that posits that white people are being replaced by non-white people through immigration.

The subjects of White Noise are a study in the contradictions of white nationalism, said Usha Tummala-Narra, a professor in the Lynch School of Education and Human Development. Cernovich, who peddled conspiracy theories like #pizzagate, received what he described as a “seven-figure sum” in a divorce from a high-powered attorney and then married an Iranian-American woman. Southern, who zeroed in on stopping illegal immigration, married a man who is part Asian.

“I really felt these layers of dissociation pervading the way that people thought and justified their ways of viewing the world,” said Tummala-Narra, a licensed psychologist who studies mental health and trauma within immigrant communities. “Their partners were not white, so how does all this get reconciled both intrapsychically and collectively in their message to other people about white nationalism?”

Lombroso suggested that Cernovich, Southern, and Spencer ignored the contradictions in their lives in the pursuit of fame, money, and power. “There’s something about the bigness of the ideology, the feeling that you’re part of something larger, that can attract people,” he said. “But in the end, it is empty, it’s filled with contradictions, and all of them regret becoming part of something that didn’t give them what they were ultimately looking for.”

Cernovich started selling supplements. Southern moved to Australia. Spencer got divorced and now lives in his mother’s mansion in Montana. “This ideology doesn’t make you happy,” Lombroso said. “It’s almost like a drug—it fixes you temporarily.”

And yet, the panelists agreed, white nationalism isn’t going anywhere. “This is part of our country, our society. This is where we are,” Tummala-Narra said. “When you have such disparate value systems or ideologies, either you can work through it and identify it, or you can continue living in these separate worlds and ultimately crumble together.”