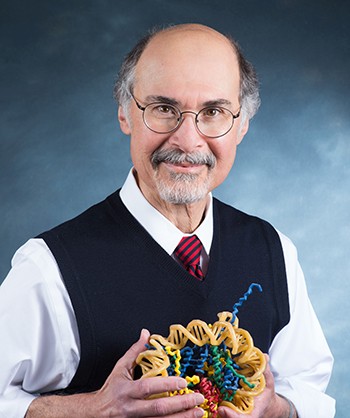 The nuclear DNA of eukaryotes is organized with structural and regulatory proteins to form the nucleoprotein complex termed chromatin. The primary functional unit of chromatin is the nucleosome, a particle containing histone proteins and approximately 200 base pairs of DNA. Research in my laboratory is directed toward understanding the processes involved in nucleosome assembly during DNA replication, and the regulation of chromatin function by histone posttranslational modifications. Just as the DNA in dividing cells must be replicated once each cell cycle, so too must sufficient histones (and other chromatin proteins) be synthesized to assemble nucleosomes on the newly replicated DNA. The proper assembly of chromatin during cell division is of vital importance, because the presence or absence of nucleosomes (and the precise positioning of nucleosomes with respect to DNA sequences) can determine which genes are transcribed, and when.

The faithful transmission and assembly of chromatin requires that many independent cellular processes be coordinated. As DNA is being replicated, histones are synthesized, then modified by enzymatic acetylation, transported to the nucleus, and assembled into nucleosomes. Moreover, supercoiled chromatin higher-order structures must first "unwind" to allow access to the DNA, and then condense again after replication is completed. In my laboratory, the specific questions currently being investigated include: the modification status of parental histones that are segregated to progeny chromosomes, and the mechanisms of histone deposition onto newly replicated DNA; the involvement of histone acetylation in nucleosome assembly, and the properties of enzymes (acetyltransferases) involved; and the study of novel inhibitors of histone modifying enzymes.

Our experimental approaches involve biochemical analyses (using mammalian cultured cells) and genetic studies performed in yeast.  We also take advantage of antibodies directed against specific histones and histone modifications, to purify and analyze newly assembled nucleosomes and chromatin components.  Ultimately these studies should provide a better understanding of the regulation of chromatin organization during DNA replication, and of the faithful transmission of epigenetic information from one generation to the next.