How this graduate became a nomadic social worker 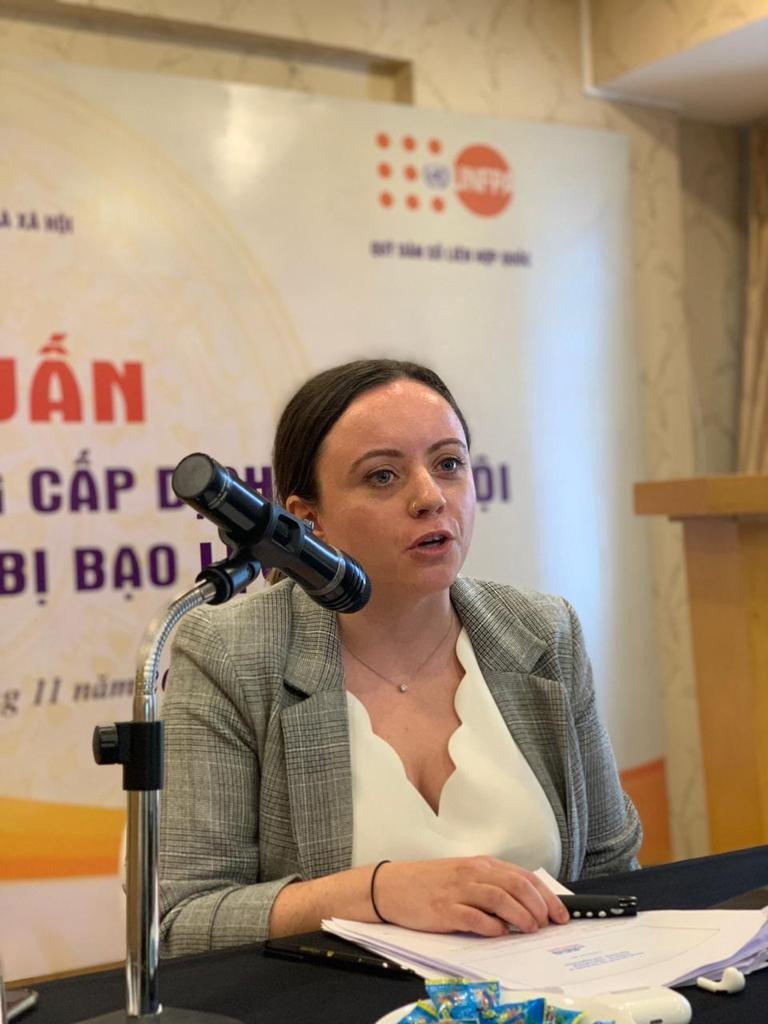 Clara O’Leary was working in Sierra Leone for the first time. It was 2018, nearly two decades after the country’s civil war had ended, and she had just helped interview over 200 people in three communities across this West African nation.

O’Leary planned to use the findings, gathered from community members of all ages, to establish protocols aimed at protecting children from abuse, neglect, and exploitation.

Then a second-year master’s student in the Boston College School of Social Work, she began categorizing excerpts from the interviews and looking for themes. But she soon realized that it would be better to teach people in Sierra Leone how to collect and analyze the data themselves. After all, O’Leary was scheduled to work in the country for only five months, and the project would outlast her internship at ChildFund, an international charity dedicated to helping kids in need.

In short order, she organized a workshop for 15 ChildFund employees in the capital city of Freetown and taught the participants how to conduct qualitative research. The team she trained finished the project two months after she left—a testimony to her ability to invest in people.

“I should always be working myself out of a job. I think that might be true about social work across the board, but particularly in development work,” says O’Leary, MSW’18. “Taking the time and making sure that I’m doing what I can to build up those around me is what I try to do.”

Her first stint in Sierra Leone shaped her professional goal—to strengthen the skills that organizations and communities need to thrive in a fast-changing world—and set her on a path toward becoming a kind of nomadic social worker. Over the past six years, she has worked in three different countries on three different continents: Asia, Africa, and South America.

O’Leary has spent the past 18 months working in Vietnam for UN Women, the self-described “global champion for gender equality.” Among her accomplishments? Helping to write the five-year strategic plan for UN Women Vietnam and advocating for the passage of the country’s Gender Affirmation Law, which would ensure that transgender people are free from violence and discrimination.

O’Leary has worked as a consultant for the past three months, focusing on creating, sharing, and managing the organization’s publications, presentations, and policy briefs. She credits her experience as a macro student in the global program with helping her hit the ground running.

“The macro program gave us a little taste of everything,” she says. “Innovation, finance, leadership, project development, and UN systems were all covered in my courses.”

O’Leary has looked at the world through a global lens since her childhood, when she lived in England and Austria. But it wasn’t until she began teaching English to schoolchildren in Spain that she realized she wanted to combine her global worldview with a career in social work.

After graduating from Indiana University in 2014 with a bachelor’s degree in international studies and Spanish, O’Leary took a job at a bilingual school in Madrid. A social worker visited the school every few weeks, but O’Leary saw gaps in care and says urgent issues weren’t always addressed right away.

“We had a social worker who we shared with several other schools, and so we only got to see her once every few weeks,” she recalls. “But there were definitely issues that came up with some potential violence in the household, things that came up that seemed really urgent.”

“I should always be working myself out of a job. I think that might be true about social work across the board, but particularly in development work. Taking the time and making sure that I’m doing what I can to build up those around me is what I try to do.”

O’Leary envisioned the difference a full-time social worker could make in the lives of her students and resolved to look into the helping profession. She loved teaching, she says, but wanted to find a career that better-suited her skill set. “I knew that international was something I was looking for and I knew that I wanted to do social work, but I wasn’t sure how to bring those two together,” O’Leary recalls. “And then I found the BC global program and I was like, ‘Oh, this exists, this is great, this is what I want.’”

One of her most formative experiences came as a result of a connection she made at BC. During her fieldwork for ChildFund, she emailed Thomas Crea, a professor who chairs the global practice program, and asked him to send her some primers on qualitative data analysis. O’Leary was constantly drawing on the “Program Evaluation” course that she had taken with Crea and wanted to make sure that she had the tools she needed for her training workshop.

After that, O’Leary and Crea kept in touch. O’Leary graduated and returned to Freetown to work for BCSSW’s Research Program on Children and Adversity, where she trained non-specialists to deliver a mental health intervention to youth who had been exposed to violence. Crea received a $2.6 million grant from the National Institute of Child Health and Human Development to study the long-term social, physical, and mental health of children who were exposed to Ebola in Sierra Leone and suggested O’Leary apply for the position of project manager.

O’Leary got the job and, she says, set about “getting the project off the ground.” Her responsibilities ranged from coordinating partnerships with local organizations and training a team of six local research assistants to overseeing qualitative data collection and presenting initial findings to members of the Ministry of Health and Sanitation.

She says she formed a particularly important partnership with the Sierra Leone Association of Ebola Survivors, a volunteer organization that advocates the needs of people who survived the disease. At least one member of the association was present at each data collection site, lending credence to the project.

“That was really validating for a lot of the participants,” says O’Leary, whose collaboration with the nonprofit was of a piece with her commitment to working with community members to solve pressing social problems. “The part I like most about being a social worker in a global context is maintaining the social justice framework,” she adds, “and making sure that it’s always present in my mind.” 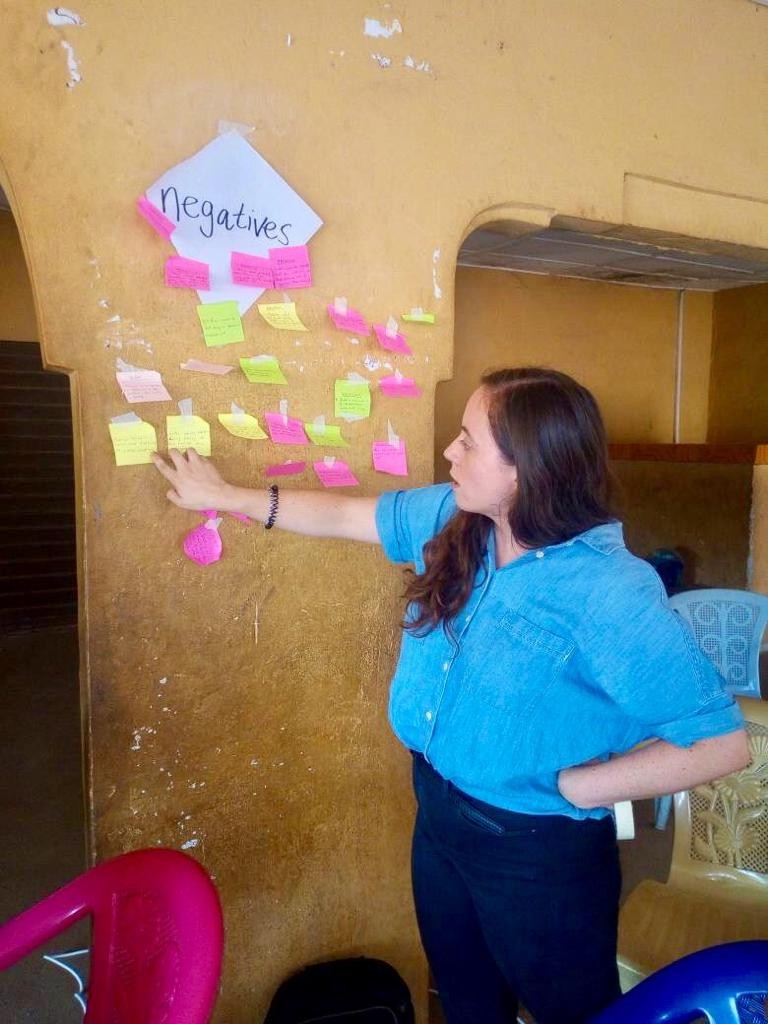 Crea, who oversaw O’Leary’s work in Sierra Leone from November 2018 to March 2021, describes her as an “advocacy-oriented problem solver.” He says she has a knack for combining hard skills such as managing projects and evaluating programs with soft skills such as curiosity and cultural awareness to strengthen communities in far flung parts of the world.

“Clara is a great example of how students can learn hard skills in the MSW program and then lean on their soft skills to work with communities on topics important to them,” says Crea. “She shows that with vision and motivation, global practice students can start working immediately to serve communities effectively and innovatively.”

O’Leary got her first taste of global social work in the summer after her first year in the MSW program. She took a course, “Community Development for Innovation: The Chilean Context,” and got to collaborate with local agencies in Santiago, Chile, to develop innovative interventions for children at risk of homelessness. As part of her fieldwork in Chile’s capital, she and her classmates worked with youth to conduct a community needs assessment focused on how to protect children from harm and then made recommendations to three local nonprofit organizations.

“I had loved the introductory innovation course and this was a really great way to put some of those tools into action,” says O’Leary.

She has come a long way since that summer in 2017—literally. Her contract with UN Women Vietnam runs out in December, and she’s not sure what she wants to do next—or where she wants to go. She’s been thinking a lot about working for another non-governmental organization, but her plans are still up in the air.

One thing she knows for sure? “If I am true to capacity building and sustainability, I am not going to be a country director in, you know, East Africa,” she says. “That goes against my ethos.”

Perhaps she will take the same advice she would give to current students in the global program and lean on her networking skills as she looks for her next job. “I can’t stress enough the importance of networking as a global social worker,” she says. “Even just reaching out to people for informational interviews I have found to be a great way to make connections.”