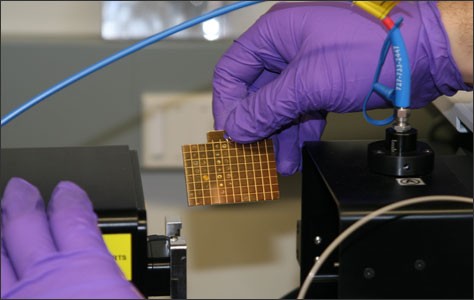 The Center for Mass Spectrometry (CMS) facility at The Merkert Chemistry Center maintains a wide range of state-of-the-art mass spectrometers and chromatographic systems, providing the full suite of ionization and separation options that are capable of dealing with all sample types and a wide array of client demands. Ionization methods available include ESI, APCI, APPI, DART, and AP-MALDI, all of which are capable of operating in both the positive and negative ion modes.

Samples are generally run by the facility staff, and the results are provided as electronic data files. In special circumstances, an individual researcher who makes frequent use of a particular spectrometer may receive training and become authorized to run samples personally. Such authorized users then often run samples for other members of their own research group to reduce the pressure on the facility staff.

If you are an external user seeking to use Merkert CMS facilities, please contact Mr. Marek Domin to discuss your project.

In Full scan mode the CMS has sensitivity for Reserpine of 100pg and in SIM mode of 10pg, with a 5μl sample injection volume of 100μl/min.

The JEOL AccuTOF, configured with a new Direct Analysis in Real Time (DART) ion source, represents a significant breakthrough in mass spectrometry. It is the first mass spectrometer to allow the analysis of solids, liquids and gaseous samples at atmospheric pressure and ground potential by simply placing the sample between the DART and the mass spectrometer. No solvents or sample preparation are required. The system design results in high throughput with no carry over, even with neat polyethylene glycol (PEG). The DART can even analyze samples directly from a variety of surfaces such as concrete, currency, food, pills, clothing, and TLC plates. The AccuTOF DART combination achieves high specificity through high resolution. Exact mass measurements together with precise isotopic abundances can rapidly identify unknown compounds by their elemental compositions.

The DART ion source is based on the reactions of excited-state species with reagent molecules and polar or non-polar analytes. It is free of the limitations that are common to other atmospheric pressure ion sources, which require direct exposure of gaseous or vaporized liquid samples to elevated temperatures and electrical potentials, ultraviolet irradiation, laser radiation, or a high-velocity gas stream. DART does not alter the sample in any way, nor does it expose the user to a potentially harmful substance or dangerous situation.

The Agilent 6220 TOF LC/MS delivers exceptional analytical performance, including 2-ppm mass accuracy, and is ideal for protein and metabolite profiling. The powerful combination of resolving power and high mass accuracy allows identification of impurities in complex matrices faster and with greater confidence than with other methods. The instrument has a variety of ion source ESI, APCI, APPI and AP-MALDI meeting the widest range of applications.

The 6460 Triple Quad MS is a liquid chromatograph triple quadrupole mass spectrometer that performs MS/MS using three sets of parallel rods (in this case, quadrupole, hexapole, quadrupole). The first quadrupole separates ions into precursor ions that are fragmented in the hexapole into product ions, which are separated by the second quadrupole. Often, two or more precursor ions and their product ions are monitored in sequence in MRM (multiple reaction monitoring) mode. You can monitor up to 4000 MRM transitions by using Dynamic MRM.

The Bruker Autoflex Max MALDI-TOF mass spectrometer can analyze ions over a wide m/z range, enabling analysis of a broad spectrum of molecules, from smaller molecules, for example lipids and peptides, up to polymers and intact proteins larger than 100 kDa. With their PAN panoramic focusing and new 10 bit digitizer, peak resolution is maintained, and enhances dynamic range for a more complete view of low abundance sample components. In MALDI MS imaging applications, this expansion of dynamic range can be invaluable for complex samples such as tissue, but also beneficial for all applications, including direct TLC-MALDI, and polymer characterization. 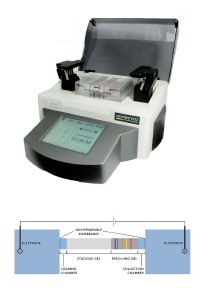 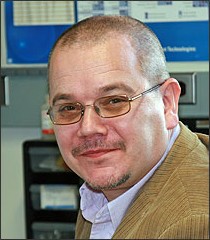 Mr. Marek Domin joined the Chemistry Department at Boston College in August 2005. A native of England, Mr. Domin worked at the School of Pharmacy in London for ten years as part a large mass spectrometry group. He obtained his M.Sc. degree in chemical research from Birkbeck College, where he used capillary electrophoresis, as an alternative to gas chromatography – mass spectrometry for the detection of modified DNA bases by hydroxyl radicals. During his graduate studies, he carried out research into the characterization of micro-organisms using MALDI-TOF. Mr. Domin has been elected to the Royal Society of Chemistry, Editorial Board, for their "New Developments in Mass Spectrometry" book series, along with Professors Juan Garcia-Reyes and Frank Sobott. His research interests include the application of mass spectrometry as a routine tool for chemistry/chemical biology; exploring new research applications for mass spectrometry; reaction monitoring by mass spectrometry; and the use of open air ionization methods for the analysis of pharmaceutical, biological, and chemical analysis.