She built a career as a clinical psychologist in Venezuela. Now she’s remaking her professional life at BC. 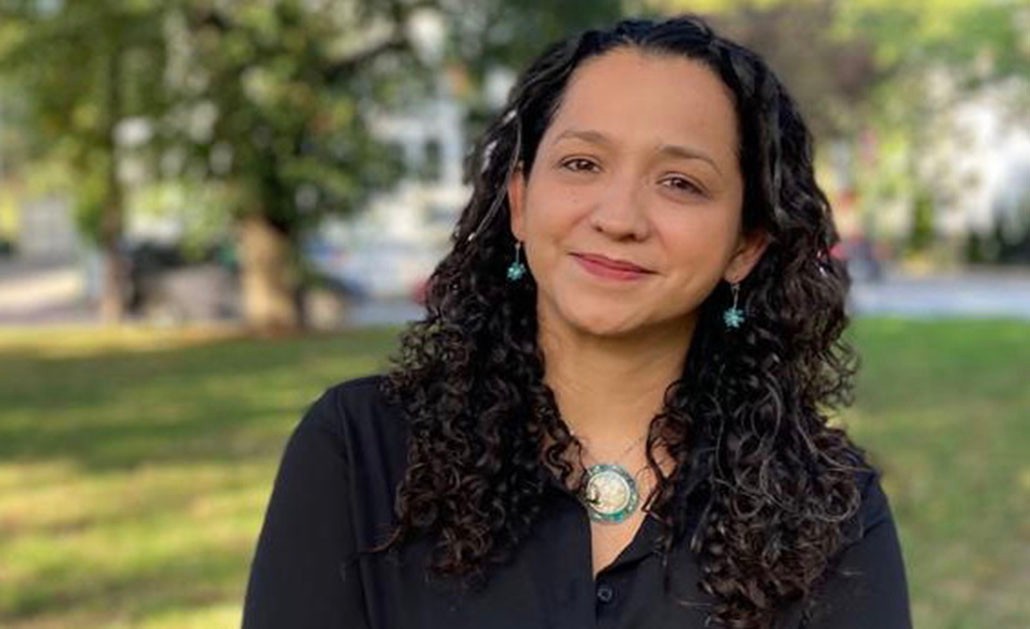 It was 2015, and widespread violence, hyperinflation, and poor healthcare had thrown the country into crisis.

But none of that mattered now. Not when the lives of her and her family were at stake. She had two young kids, a husband.

“We knew we needed to leave the country,” says Izquiel, now a second-year student in the Boston College School of Social Work. “The situation there was horrible for us.”

Eventually, they found a way out. Izquiel’s husband applied to the Graduate School of Design at Harvard, and when he got accepted, the family of four picked up and moved to Boston.

They were safe, yet life in their new city wasn’t easy.

Izquiel didn’t know how to speak English. She hoped her phone wouldn’t ring because she didn’t want to answer calls in a language she didn’t know. But her nerves quickly gave way to confidence—and new beginnings.

In 2016, she took free English classes at the Cambridge Community Learning Center and mastered the language. Three years later, she started at BC.

She says her long-term goal is to rebuild the career she left in Venezuela. She wants to teach, work at a health center, open up her own private practice.

“I’m so happy I chose social work,” says Izquiel, who belongs to the school’s Latinx Leadership Initiative, which prepares students to work with Latinx clients. “I identify with the field because of my work with the community in Venezuela.”

Izquiel recently received a Minority Fellowship from the Council on Social Work Education, a nonprofit that represents graduate and undergraduate social work programs in the United States. The fellowship includes $10,000 and training in the delivery of mental health services to racial and ethnic minorities.

“I got emotional when I found out,” says Izquiel, one of only 42 master’s students to receive the honor. “It’s like a bridge between my past in Venezuela and my present in the United States.”

“I’m so happy I chose social work. I identify with the field because of my work with the community in Venezuela.”

Her clients in Venezuela ran the gamut of economic security, from the rich to the poor. Some had been sexually assaulted or buried a child who had been murdered. Others had broken up with a significant other and needed guidance.

“The topics were different,” she says, “but the human suffering was the same.”

Right now, she’s working with a dozen Latinx clients at a health clinic in Somerville, Massachusetts. Many of her patients have been granted Temporary Protected Status, allowed to live and work in the United States for a limited time because of armed conflicts or natural disasters in their countries of origin.

Izquiel says they worry about getting deported or separated from their families. They live in fear of the uncertainty, suffering from anxiety and depression.

“You are not sick. You do not have a mental illness,” she tells her clients. “You’re experiencing a normal response to your situation.”

As part of her internship, Izquiel is writing a paper focused on the benefits of using a client’s native language in psychodynamic therapy. Latinx clients who speak Spanish at home, she says, should have the option to speak Spanish with their therapist.

“Boston College has opened so many windows for me,” says Izquiel. “I’m so excited about this paper.”

She says her classes at BC have prepared her to address the unique challenges Latinx clients face. Learning about immigration, student visas, and Latinx history, she says, have made her a better therapist.

“I knew a lot about clinical work,” says Izquiel, “but this is a whole new world for me.”

She notes that her peers in the LLI have eased her transition to the United States. “We are like a family,” she says. “Even if we are not in the same classroom, we are always supporting each other.”

At BC, she’s found a new home.