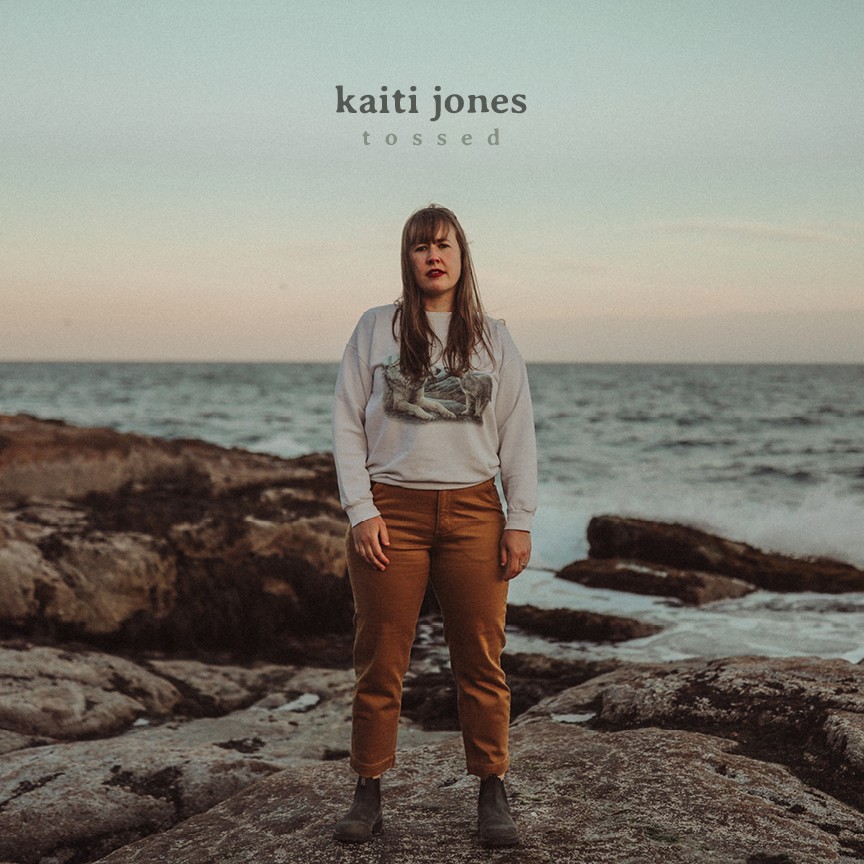 Kaiti Jones released "Tossed" in early March. Each of the nine songs on the album tells a story, she says, often rooted in existential angst or failed romance. Photo by Paula Champagne.

Kaiti Jones, a social worker and an indie folk singer, rented a surfboard from a stranger in a parking lot and took an Uber to a beach 30 minutes outside of San Diego. It was spring 2018, she was on a business trip, and her mom had just been diagnosed with cancer.

“It was the only time that weekend where I could be alone and cry,” says Jones, who graduated from the Boston College School of Social Work in 2017. “I was in a city I’d never been to and I was freaking out.”

She had surfed once before, back in 2017. But now she was at the mercy of the sea, getting battered by the waves. As she thrashed around, Jones conjured up the lyrics to a verse in the title track of her new album “Tossed”: “But the sea she keeps a tally/Of the battles I have lost/So I struggled for a moment/ ‘fore I let myself get tossed.”

The song, she says, is a metaphor for letting go, for accepting what she can not control. Mom has multiple myeloma, a rare form of blood cancer that can not be cured, and daughter can not help her.

“I’m acknowledging that I’m a small person in the universe against this struggle,” says Jones, who notes that her mom will need chemotherapy for the rest of her life. “It’s raw, written in the emotional present rather than a nostalgic past.”

“Tossed” typifies the tracks on her sophomore LP, released in early March. Each of the nine songs tells a story, she says, often rooted in existential angst or failed romance.

“Gettin Around To It,” an upbeat rock song, explores the ways in which procrastination can destroy promising relationships. GBH described the track as “lush, Tom Petty-esque rock.” Audiofemme, a music and culture blog, compared Jones’ “rich vocals and genuine, tender delivery” to the singing of indie rock star Phoebe Bridgers.

“The lyrics are the most important part of what I want to share on an album,” says Jones, who studied English writing as an undergrad at Belmont University in Nashville. “I’m very particular about the words I choose.”

Jones grew up in a family that loved music. Her dad played guitar and blasted Crosby, Stills, Nash & Young, the folk rock supergroup. “He’s the ultimate roadie dad,” says Jones. “He’s like, ‘let me coil your cords and give you feedback on your sound mix.”

The first song Jones learned to sing was “Drive My Car” by The Beatles. “I remember singing it for my dad a cappella,” Jones recalls. “He was probably like, ‘what is going on here?’”

“I love sharing stories. I love that storytelling is an agent of connection. And I want to keep telling stories to more people.”

Although Jones lived in Portland, Maine, she often took trips to see her mom’s family in Memphis, Tennessee, which some music critics consider to be the birthplace of rock ‘n’ roll. Many artists, including B.B. King, Johnny Cash, and Elvis Presley, recorded their debut albums there.

“We had these big family singalongs in Memphis,” Jones recalls. “Music was just part of the tapestry of both sides of my family.”

As a toddler, Jones learned to play violin. In middle school, she joined the rock band at her church, learned to play guitar, and started to write her own songs. “I don’t have any memories from childhood that don’t involve music,” she says.

Her earliest memory of music dates back to a violin lesson at age 3. “I was crying because I hated it,” she recalls. “I’m sure my mother was also crying because it’s hard to teach a very tiny person to play the violin.”

Jones played acoustic guitar, electric guitar, and piano on “Tossed,” which was produced by local musician Daniel Radin between December 2019 and May 2020. She recorded most of the album before COVID-19 hit in March, but tracked all of the vocals after the pandemic halted daily life.

“It was hard to find the steam to finish the album,” she says. “After being all-in at work, I had to be like, ‘OK, let’s go record vocals in my room.”

Jones worked at Boys & Girls Clubs of Boston, where she was in charge of programming and partnerships. She scrambled to help keep after school programs in place after the city shut down, but was laid off in November because of the pandemic.

Jones says that she was lucky to keep her job for eight months after COVID-19 sent the unemployment rate soaring. “Getting laid off was challenging,” she adds, “but I chose to find the silver lining and focus on finishing the record with as much excellence as possible.”

Jones doesn’t know what her future holds, but she does know that she wants to find more ways to combine her love of music and social work. She connected her two interests on “Mystic,” the final track on “Tossed,” which, she says, explores the different ways in which society views Black and white women.

“I’m aware of my own privilege and power and the ways that my thinking are subject to white supremacy culture,” says Jones. “I hope I can continue to integrate justice and anti-racist work into my songwriting.”

She has some advice for musicians like her, artists who work day jobs to pay the bills. “Do what you love without having some big objective,” she says. “Start small and grow over time.”