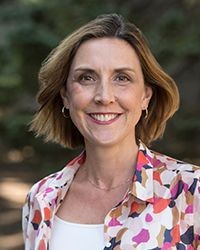 Dr. Mara Willard's research focuses on the intersection of religion, ethics, and politics in the twentieth century. Her first book, Religion Around Hannah Arendt (from Penn State University Press), presents a fresh reading of Hannah Arendt, demonstrating that Arendt's diagnoses and proposed cures for modern state violence made creative use of intra-and post-Christian theological debates.

Dr. Willard served on the faculty of the IS Program from 2018-2021 as Visiting Assistant Professor in the area of religion, theology, and ethics. In addition to serving as an IS academic advisor and senior thesis advisor,  she helped to develop and co-teach the IS Core course “Where on Earth: Foundations in Global History,” and taught the IS Core course "Ethics, Religion and International Politics" as well as “Climate Crisis and the Religious Imagination”  and the senior seminar “Bodies Politics.”

From 2017-2018 Dr. Willard was a Visiting Scholar at BC's Boisi Center for Religion and American Public Life, and remains a participant in its programming. From 2015-2017, she was an assistant professor of religious studies at the University of Oklahoma, where she was also affiliated with Jewish Studies and Women's and Gender Studies.

Dr. Willard received a B.A. in history from Swarthmore College, holds an M.Div. from Harvard Divinity School and Ph.D. from Harvard Graduate School of Arts and Sciences. She has worked professionally in Washington D.C. with the global organization Ashoka and the Advisory Board Company, and done project work on conflict alleviation and recovery with the Center for Strategic and International Studies and USAID. Dr. Willard served the guild of religious studies as a board-appointed member of the American Academy of Religion's Committee on the Public Understanding of Religion from 2015-2019. She grew up in Newton, Massachusetts, and has vivid childhood memories of sitting in traffic on Boston College game days. She lives in Arlington with her spouse Chris Railey and their two boys.