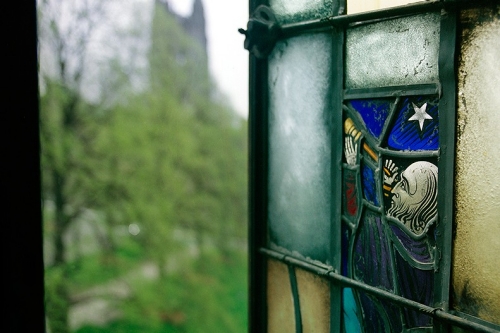 Do you have questions about your future or where God might be calling you? Manresa House exists to help members of the Boston College community work through some of life's more difficult questions—particularly those related to vocation.

The Manresa House offers a space of Jesuit hospitality to students. Come by for our Weekly Examen on Wednesdays at 9:45 p.m., joining students from across campus in this centuries-old Ignatian prayer. Take 15 minutes to reflect on your week, your day, and the presence of God in your life.

BC graduates share the formative experiences that led them to the priesthood.

Get to the know the Jesuits of Boston College via this Campus Ministry photo project.

Some other religious orders that women and men have joined over the centuries are: The Augustinians, Dominicans, Franciscans (OFM, TOR, and O.Caps) Carmelites, Benedictines, Marists, Redemptorists, and the Paulists, Sisters of St. Joseph. These websites and many others for both women's and men's orders can be found at the following website.

“Vocation” is a catch-all word that can be used in many different contexts, but is most often used to describe someone's career aspirations or direction in life.

Boston College’s Jesuit Catholic tradition is rooted in the idea that God is always calling us to something more, something different, something that is authentic to our being and to who God has made us to be. And while all Christians are called to live out the command of their baptism to go forth and be disciples, a smaller group take on a deeper calling of service to Christ and the Church. This can take many forms, particularly to the priesthood, religious life for women and men, and lay ecclesial ministry.

We invite you to take a moment and consider, to what vocation is God calling you?

Here at Manresa House, we are concerned with helping students consider and discern where they feel God might be leading them. So, wherever you are on the journey, know that we are here as a resource.

The Society of Jesus—more commonly known as the Jesuits—is a Catholic order of priests and brothers founded by St. Ignatius Loyola, a Spanish soldier-turned-mystic who worked to find “God in all things.”

The Jesuits are active around the world, and its 17,000 members (across six continents and 124 countries) makes it the largest religious order in the Catholic Church. Jesuits work in parish and retreat ministry, in high schools and colleges. They may be found working as lawyers and doctors, psychologists and counselors, writers and journalists, theologians and philosophers, researchers and scientists. In short, Jesuits do all kinds of work. And yet, even with this great array of voices and gifts, Jesuit priests and brothers share a singular mission: to do the world a world of good. In this way, a Jesuit dedicates his life’s work to working for the greater glory of God and the salvation of souls.

Are you interested in learning more about the Jesuits? Visit beajesuit.org, stop by the Manresa House, or contact us at ministry@bc.edu to schedule some time with a Jesuit on campus!

America magazine is the leading Catholic journal of opinion in the United States. First published in 1909, America magazine is known across the Catholic world for its unique brand of opinion and analysis. From theology and spirituality to politics, international relations, arts and letters, and the economy and social justice, America’s coverage spans the globe, telling the stories that matter most to the church and the world.

Busted Halo is a unique media resource that utilizes a relevant and accessible voice to help people understand the Catholic faith, put it into practice in their everyday lives, and share it with others. Busted Halo is a ministry of The Paulist Fathers. The Paulist Fathers are a religious order of Roman Catholic priests — the first to be founded by an American citizen — whose mission territory is the United States.

TJP is a project of Jesuits in formation. Nearly all of the contributors are not-yet-ordained Jesuits studying theology or philosophy, or working in our Jesuit ministries. Several recently ordained Jesuits also contribute to the work. On the whole, about 50 Jesuits are currently involved in the project. In addition to the website, TJP maintains a very active social media presence, contributing to the web’s best conversations about faith and culture — whether it touches on politics, theology, Church news, debates about belief and secularity, or really anything else.

Have Boston College students gone on to become Jesuits?

Absolutely! In fact, in the past 20 years, at least 10 alumni have entered the Society of Jesus. Many say the charism, community, and traditions of BC helped support their vocation to the priesthood. Learn more about their journeys by reading Paths to the Priesthood.

What's the difference between a Jesuit and a Diocesan priest?

Good question. Jesuits are members of a religious missionary order (the Society of Jesus) and Diocesan priests are members of a specific diocese (e.g. the Archdiocese of Boston). Both are priests who live out their work in different ways. Learn more in this three-minute video from our friends at the Jesuit Post.

What are the stages of formation in becoming a Jesuit?

A man is usually welcomed into the Society in August, on Entrance Day, and the formation process can take anywhere from eight to 13 years to become a Jesuit priest or brother.

A Jesuit’s formation begins in the novitiate, where he spends two years learning how to pray, how to live in community, and about the Society of Jesus. Novices also do apostolic work and make the 30-day Spiritual Exercises of St. Ignatius Loyola. Essentially, in the novitiate, a man learns how to be a Jesuit. At the end of the two years, he pronounces perpetual vows of poverty, chastity, and obedience.

After professing First Vows, a Jesuit moves into academic work as a brother or a scholastic (a man who is preparing for priesthood). He studies philosophy at a Jesuit university (including our own School of Theology and Ministry), usually for three years. Additional ministerial work further deepens his Jesuit identity. Some scholastics and brothers are missioned to finish work on their bachelor’s degrees, while others work on advanced degrees in philosophy or other subjects.

Then, in Regency, a Jesuit brother or scholastic works full-time in a Jesuit ministry, living in an apostolic community of Jesuits, usually for three years. Often teaching at a Jesuit high school or university, the regent learns to balance full-time apostolic work with a life of prayer and community living.

After completing regency, Jesuit scholastics (men preparing for priestly ordination) study theology at the graduate level, usually for three years. A Jesuit brother might study theology for a shorter time as a way to enhance his effectiveness for ministry.

Tertianship is a time of renewal. A Jesuit revisits the foundational documents and history of the Society of Jesus and makes the 30-day Spiritual Exercises again—in a sense reaffirming his vocation.

The formation process ends with the pronunciation of final vows.

Information adapted from beajesuit.org and the Jesuit Conference of Canada and the United States.

Who can I talk to about becoming a Jesuit?

We’ll get you in touch with a Jesuit who can talk with you about the Society; simply e-mail us at ministry@bc.edu or come by the Manresa House to learn more! There are many Jesuits at BC who would be happy to sit with you and talk about their own discernment.

How can I learn about the Loyola House?

Learn about vocation at the Archdiocese of Boston

Some other religious orders that women and men have joined over the centuries are: The Augustinians, Dominicans, Franciscans (OFM, TOR, and O.Caps) Carmelites, Benedictines, Marists, Redemptorists, and the Paulists, Sisters of St. Joseph. These websites and many others for both women's and men's orders can be found at the following website.