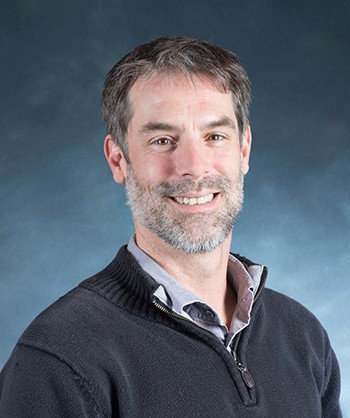 Professor Reeves’ individual printed works have appeared in galleries and museums in the U.S. and around the world, including the Dalarnas Museum, Falun, Sweden; Hamni Photography Museum, Seoul, Korea; Frans Masereel Centrum, Belgium; TBA Space, Chicago; the Grand Rapids Civic Theatre; and various venues where he lives in Portland, ME including Space Gallery, The Portland Public Library, and The Portland Museum of Art.

In 2012 he was invited to design 26 banners of his Attention Surplus, which were installed on the streets of Norre Snede and Humlum, Denmark. In 2013 he published the first edition of Old News including output from his Automated Navelgazing application. He’s the developer of Symmetron drawing software, The TV Simulator, and many other applications. The most recent, in 2015, his Psy-clop-edia for iPhone in collaboration with artist Kenny Cole and writer Daniel Kany, was released on the iTunes AppStore.

His work has appeared and/or was mentioned in various books and magazines including: Richard Noyce's Printmaking At the Edge, Grabowski and Fick's Printmaking: A Guide to Materials and Processes, Anna Brzyski’s "Art Ethics" essay in Thomas Kinkade: The Artist at the Mall, The New Art Examiner, The Kansas City Star, The Boston Globe, The St. Louis Post-Dispatch, The Portland Press Herald and others. Professor Reeves's editorial illustrations have appeared in The North American Review, Isthmus, The Madison Edge, The Capital Times, The Riverfront Times, and other publications.

From 2012 to 2015 Professor Reeves was Full-Time Visiting Faculty in the Graphic Arts area of The School of the Museum of Fine Arts, Boston (SMFA). He has also taught full-time in the Foundation program at Kansas City Art Institute. He taught drawing for two years while a graduate student at the University of Wisconsin - Madison, as well as foundations courses at The University of Missouri - Kansas City, Maine College of Art, and The University of New England. Professor Reeves currently teaches screen printing at Southern Maine Community College.

At SMFA he founded the Pro-Activity Lab, facilitating programming-related projects with student artists from all disciplines. Through his "Print Matters" and "Art Commercial" courses, he facilitated the design, printing and distribution of six collaborative student publications. There he also founded the Graphic Arts Public Lab through which three public art projects were approved in Cambridge, MA. For one of them Professor Reeves collaborated with SMFA student Daniel Barreto and an MIT physicist on an outdoor artwork entitled Release 2, installed at MIT’s library warehouse at 1 State St. in Cambridge, MA.