They major in the liberal arts—and want a career in management. How’s that going?

This past fall, the Carroll School of Management opened its doors wider than ever to the broader population of Boston College undergraduate students. And those students, mostly from the Morrissey College of Arts and Sciences, came pouring through the arched doorways of Fulton Hall.

Just during this academic year, more than 800 non-management majors have declared a management minor at the Carroll School. The upsurge of interest has come in response to four new minors launched in September by the Carroll School, designed for students at other schools of Boston College.

“It’s hard to overstate the scope of this commitment,” said Andy Boynton, John and Linda Powers Family Dean of the Carroll School, noting that the four minors represent what is probably the largest expansion in the School’s history. The dean added that the minors are a response to Boston College’s new strategic plan, which pledges to promote “opportunities for students to integrate traditional liberal arts disciplines with professional preparation and vocational discernment.”

Dean Boynton writes about the bridge to the liberal arts

“Carroll School professors are seeing fresh and different dynamics in the classroom,” Boynton wrote in a recent article for deans and other business school leaders around the country. “And our own management students are seeing the benefits as well, as they sit alongside and work on management-related projects with fellow Boston College students.”

The four new minors are Finance, Marketing, Accounting for CPAs, and Accounting for Finance and Consulting, adding to two pre-existing ones: Management and Leadership, and Managing for Social Impact and the Public Good. “Altogether, there are well over a thousand non-management students in our midst, walking our halls and pursuing a minor at the Carroll School,” the dean wrote.

This month, a little over 150 Morrissey College students (along with more than two dozen education and nursing students) will graduate with a minor in one of those management disciplines. They came to the Carroll School with the notion that they could combine their majors in history, biology, and other subjects, with a Carroll School minor—thus leveraging a career in business.

How’s that working out? We asked a sampling of these students, who are wrapping up their final, final exams and getting ready for the Commencement walk. 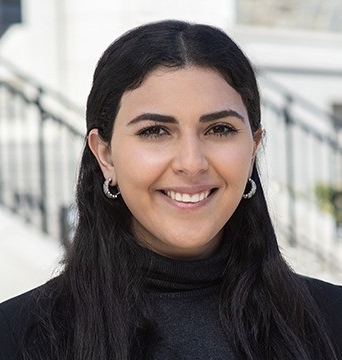 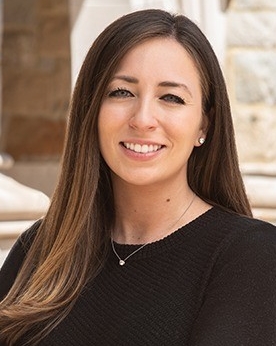 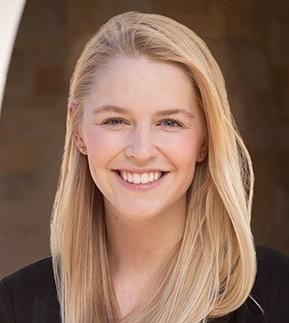 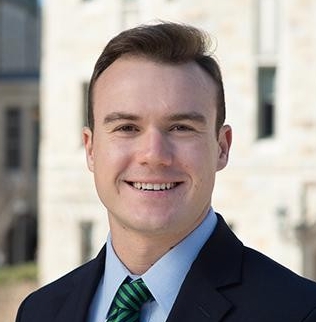 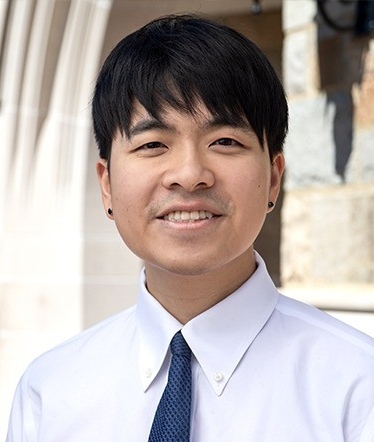 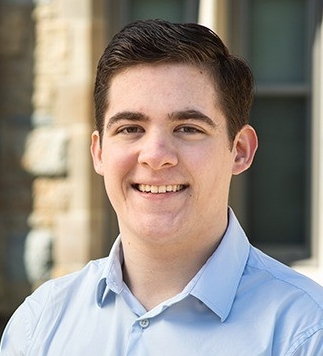 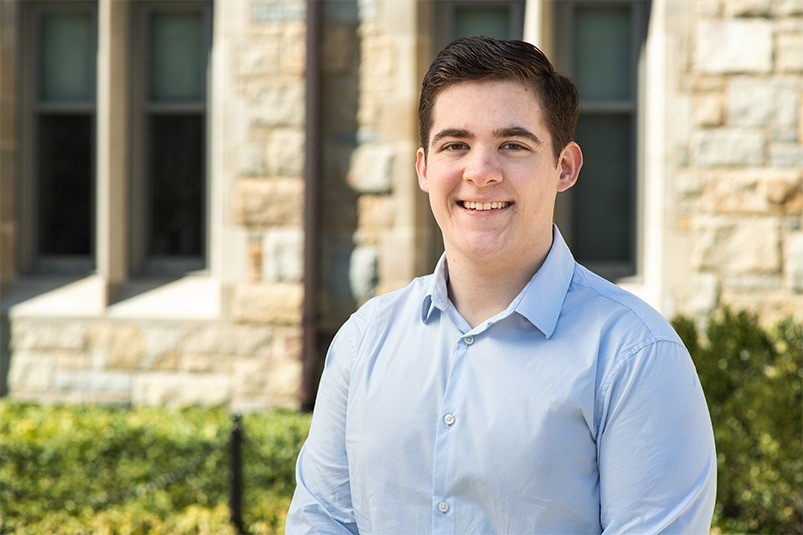 Michael Scarpetti entered Boston College with a passion for history, and he is leaving with that passion intact. But he’s also stepping into a role in accounting that he hopes will lead eventually to a career prosecuting white-collar crime.

The senior points out that his liberal arts background prepared him to “understand why certain things are done.” For example, he understood well the historical conditions that gave rise to modern accounting—including the Great Depression and, more recently, the Great Recession of 2008. At the same time, his business courses “taught me a lot about how things are done,” Scarpetti added. “Accounting is a very technical area, so having some of the best professors of it has really helped prepare me for a career in the field.”

After graduation, Scarpetti will start full-time at Withum Smith+Brown, one of the nation’s fastest growing public accounting firms, with offices in 11 cities, including Boston (where he’ll be assigned). His accounting minor at the Carroll School has allowed him to begin working in the field a year early—he noted that without the coursework, he would have needed to enroll in a fifth-year program to meet the qualifications for taking the CPA exam. Scarpetti plans to attend law school some years down the road.

“My goal,” he explained, “is to combine my technical ability as a CPA and the education I receive in law school and eventually work for the federal government prosecuting financial crimes.” 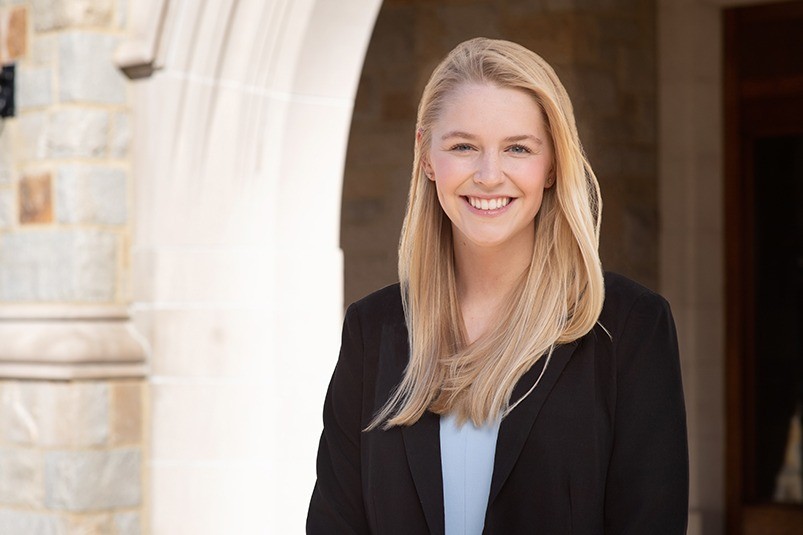 Robyn Crowley enrolled in her management minor not only as an arts and sciences student with a view toward a career, but also as a consumer. Wanting to use her pocketbook to support companies that practice social responsibility, she recalled, “I was eager to learn more about these companies and their initiatives.”

At the Carroll School, she immediately noticed that her business courses were “a bit less theoretical” than her other studies, and she had ample opportunities to engage in hands-on projects. These have included a business practicum in the senior seminar for her Social Impact minor, in which she and fellow team members are acting as external consultants to a social enterprise in Boston. It’s a nonprofit that works with ex-prisoners re-entering society.

Her thinking about a career has changed along the way. Assuming she’d enter the nonprofit world, Crowley had never really considered going into the private sector. “But now I’m very energized by that possibility,” she said, pointing to the burgeoning arena of corporate citizenship. “I now feel less limited to the public/nonprofit sectors and have a good foundational vocabulary for business.”

Next stop: Zambia. She’ll teach English in the south-central African nation as part of a two-year stint with the Peace Corps, after which she plans to embark on a career in social impact and nonprofit consulting. 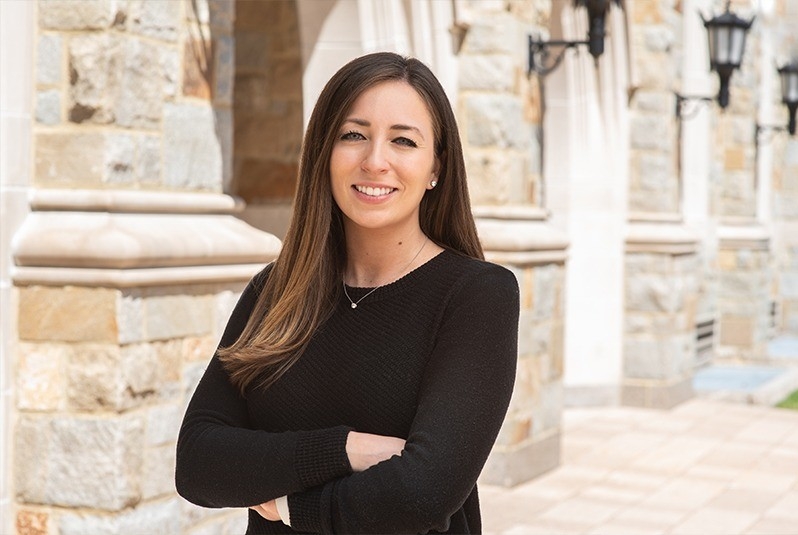 Anna Mucci admits that as a liberal arts major, the idea of taking management courses alongside Carroll School students was “intimidating, initially.” She said, “I thought I’d be behind” the other students. But Mucci recalls that once she began taking the courses, she was encouraged—and “energized by the challenge.”

For one thing, she wasn’t alone: many other Morrissey College students were enrolling in management courses. “I also felt welcomed and supported by my business major classmates,” she said, adding that her professors provided her with all the resources necessary to thrive in their classes.

Academically, Mucci was more prepared than she had realized. Her psychology courses gave her a distinct perspective on management and leadership, providing her with “a deep understanding of human behavior” that applied well to courses in such areas as organizational behavior and leadership, Mucci explained.

At the same time, she learned from her Carroll School classmates. Initially she would analyze management problems through a qualitative lens, while her management counterparts would tackle the same problems through a primarily quantitative lens. “Now, whenever I approach a case, I’m sure to consider it from both a qualitative and quantitative perspective before drawing any conclusions,” Mucci said.

As she sees it, the management courses are what put her in play for valuable summer internships, including as a sales and relationship management intern at Fidelity Investments following her junior year. She came to a further realization: “I love helping people by providing them with the right tools to make informed decisions,” in ways that bring about “positive change in their lives.”

Mucci will have the opportunity to do just that, every business day. Next month, she begins working as an investment sales associate at Fidelity, helping retail clients build their portfolios and achieve their financial goals. 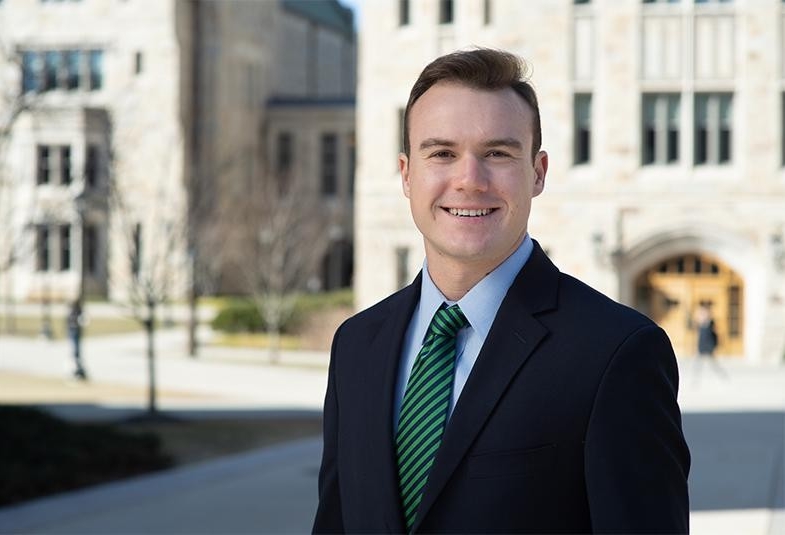 In its annual report last year, the International Renewable Energy Agency, an intergovernmental organization, stated in no uncertain terms: “Massive flows of finance are needed to accelerate renewable energy investments.” O’Grady, whose professional interests revolve around renewables, was already putting on his financial thinking cap.

After his freshman year, he started pairing his environmental studies major with courses in finance at the Carroll School. He was inspired in part by the Summer Catalyst Program, which he took as a rising sophomore; it included an introduction to financial accounting with Professor Ed Taylor. “His enthusiasm for the subject was extremely infectious, and he made the class all the more interesting with his firsthand experiences,” O’Grady recalled. “It was the best possible start to my finance minor.”

As his interest in renewable energy solidified, he also began to see the possibilities of “combining my studies by making projects both cost-effective and environmentally effective.” He knew that a grasp of financial fundamentals would help him stand out on that score. And, when the minor in finance was introduced in fall 2018, O’Grady was well on his way to fulfilling the course requirements for the new minor.

“I’ve been able to supplement my passion for the environment with hard skills in finance,” said the soon-to-be graduate, who has been interviewing at startups and other firms that work with renewables, “and that’s added a lot to my education. It’s put me on the perfect path to achieve my career goals.” 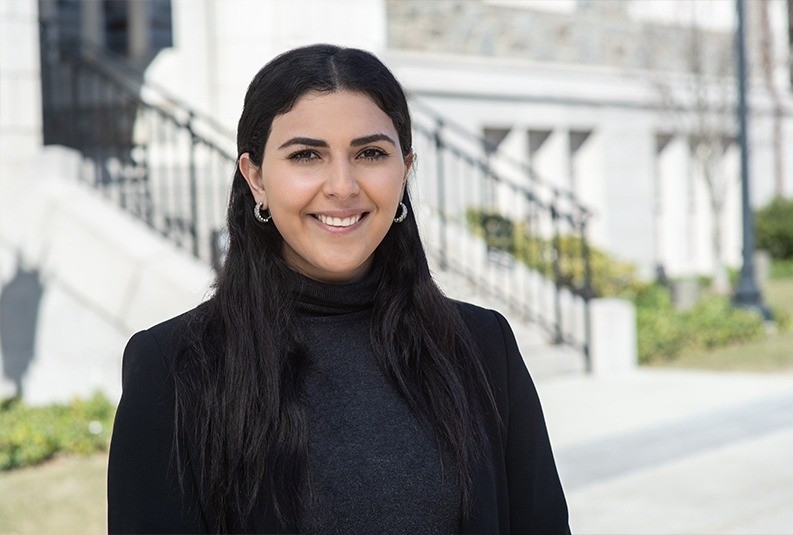 Although she came from an entrepreneurial family—or maybe because of it—Vivianna Atala wasn’t sure if she wanted to study at a business school. So when applying to Boston College, she decided to try something different: communication studies, as part of a liberal arts education.

But then, she heard about the Carroll School’s Summer Catalyst Program. Catalyst is a nine-week deep dive into the major disciplines of management, and Atala—who enrolled after her sophomore year—says her professors made management come alive. “Once I tried it, I loved everything about business,” she said, adding that her Catalyst favorites were marketing and leadership. She seized the opportunity to minor in marketing when the minor officially began this past fall.

Along the way, Atala started applying her interdisciplinary skills and knowledge to her family’s financial business—Banco Ficohsa in Central America. During one summer, she helped revise the bank’s social media presence as part of a new marketing campaign, drawing on both her communication and marketing studies. “Every day I had to wake up with new ideas that I wanted to accomplish for our campaign,” she recalled.

“I’m still so happy that I majored in communication, but I’m also thrilled that I was able to combine it with business,” Atala explained. She will now head to Spain to study for a master’s in management at the IE Business School in Madrid. After that, she wants to get more marketing experience in the U.S.—and eventually return home to the family business in Honduras. 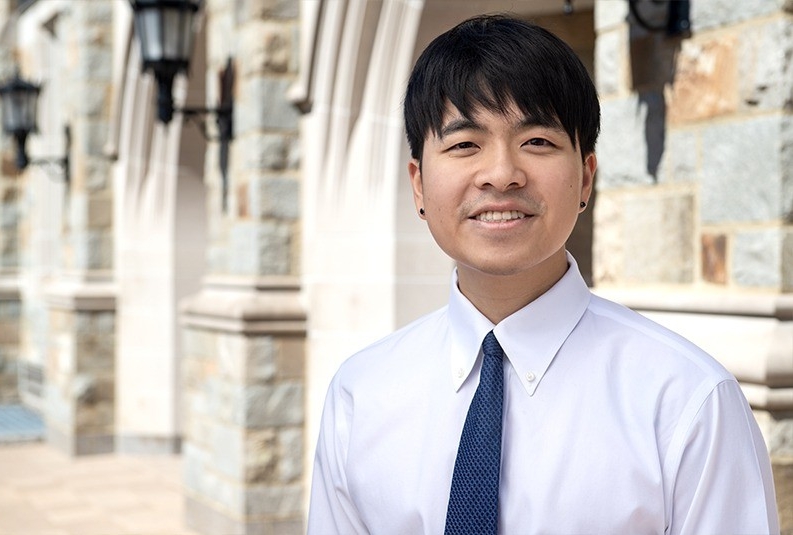 There’s no doubt that Kelvin Lin has the capacious heart of a liberal arts devotee. “I just like to pick up whatever interests me,” said the economic-and-history-major-and-accounting-minor-turned-data-analytics-enthusiast.

Lin’s broad interests are reflected not only in his academics but also his co-curricular explorations, which have ranged from the Taiwanese Cultural Organization and Fulton Debating Society to Boston College Peace Action (an organization he co-founded two years ago).

Many students take their classes in management and other subjects, and then apply what they’ve learned to practical work in the field, typically through internships. Lin has reversed the process.

His internships began during the summer after his freshman year, taking him successively to a CPA firm in Brooklyn, an earnings forecasting company in Manhattan, and a compensation consulting firm also in Manhattan. His studies in management followed. In fact, Lin has taken nearly all of his required Carroll School courses during this academic year, leaving little chance for senioritis.

French intellectuals are famous for saying with a twist, “Sure, you could do it in practice, but does it work in theory?” Lin exhibits a similar spirit, saying he has seen the benefit of going from practice to theory. “The [management] minor has given me a more fundamental understanding of what I was doing during the internships,” while the internships have given him a more practical handle on classes such as Financial Statement Analysis and Predictive Analytics, Lin explained.

The latter course, which he is now taking, has nudged his career interests toward data analytics and statistics. “The minor has been invaluable,” Lin said. “It’s provided me with a lot of technical skills that would’ve been otherwise difficult to obtain taking econ courses. And it’s made me a competitive candidate for a variety of positions.”

William Bole is senior writer and editor at the Carroll School.
Photography by Christopher Soldt.