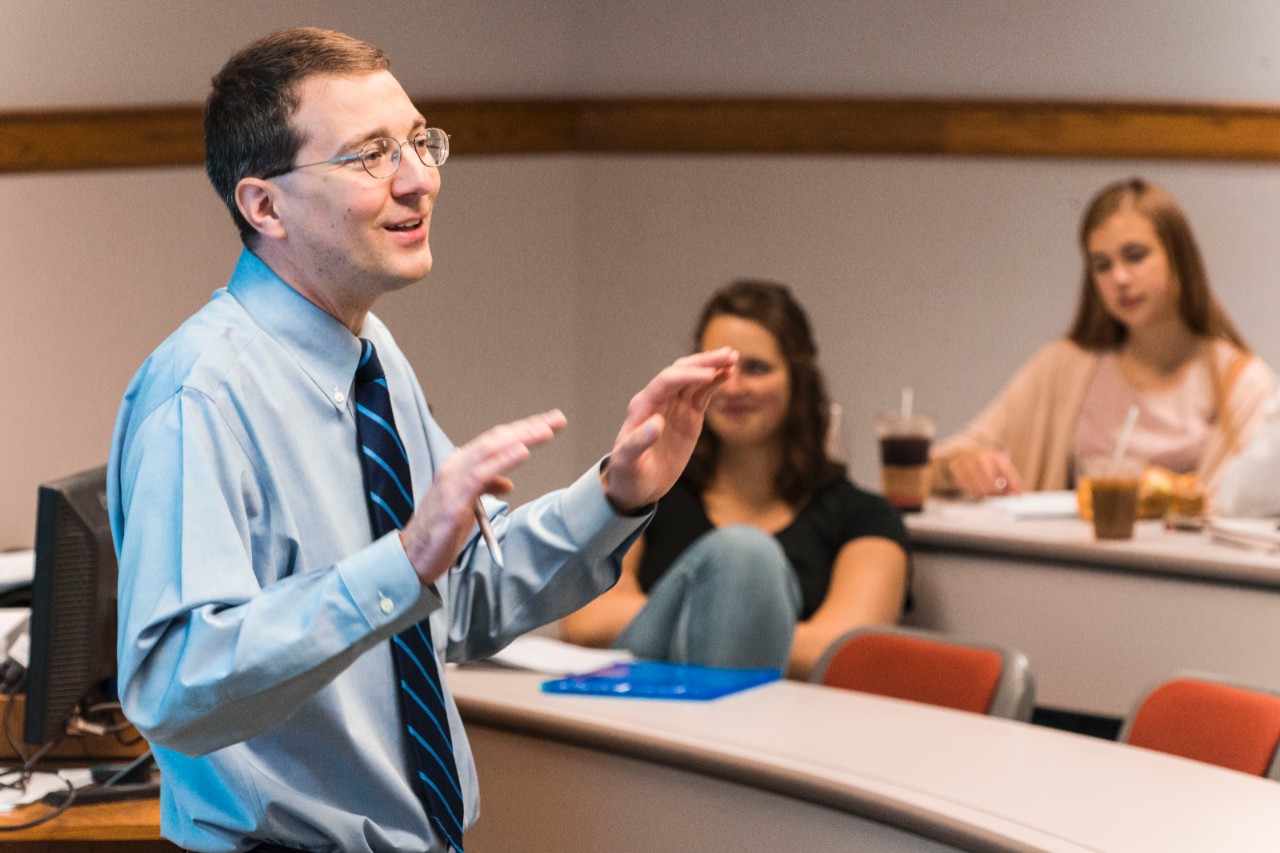 On a bright early morning in July, finance professor Robert James is teaching his undergraduates how to value stocks. He speaks of short positions and long positions, of ask prices and bid prices, of intrinsic value and market value, among other terms of trade. When he goes to the whiteboard in Fulton 117, he writes out more numbers and formulas than words. All that is business as usual in the Carroll School of Management, but this class is different: there isn’t a single management student in the room.

Nearly all of the 29 students are from the Morrissey College of Arts and Sciences, enrolled in the Carroll School’s three-year-old Summer Management Catalyst Program. It is a 10-week deep dive into the major disciplines of management, and it’s designed exclusively for liberal arts students.

At first, the leap into a subject like finance can disorient those majoring in such subjects as history, literature, or philosophy. “What’s this all about? I’m an English major!” James said after class, characterizing a typical reaction. “But gradually they get comfortable with this way of thinking. They begin to think like finance professionals.”

By all accounts, employers are increasingly seeing the value of a liberal arts background, which can bring different and broader perspectives to business. That’s regardless of whether the prospective employee is an arts and sciences major or a management student at an institution like Boston College with a strong liberal arts core. But companies are also expecting new college graduates to arrive with organizational skills and an understanding of the tenets of business. That’s where Catalyst steps in.

An Accountant at Heart

One of the 58 students who took Catalyst this past summer was Elizabeth Calderone, MCAS ’18, who is double-majoring in Spanish (under the rubric of Hispanic Studies) and economics. She enrolled as a pre-law student, hoping to make herself more marketable to employers during a gap year between graduation and law school. But something happened a few weeks into the program when she was sitting in an accounting class taught by Professor Edward Taylor.

“It just clicked with me,” said Calderone, referring to the analytical aspects of accounting in general and auditing in particular. “I loved it. I knew this was what I have to do.”

“When I started this program, I didn’t expect to leave with a completely different future.” 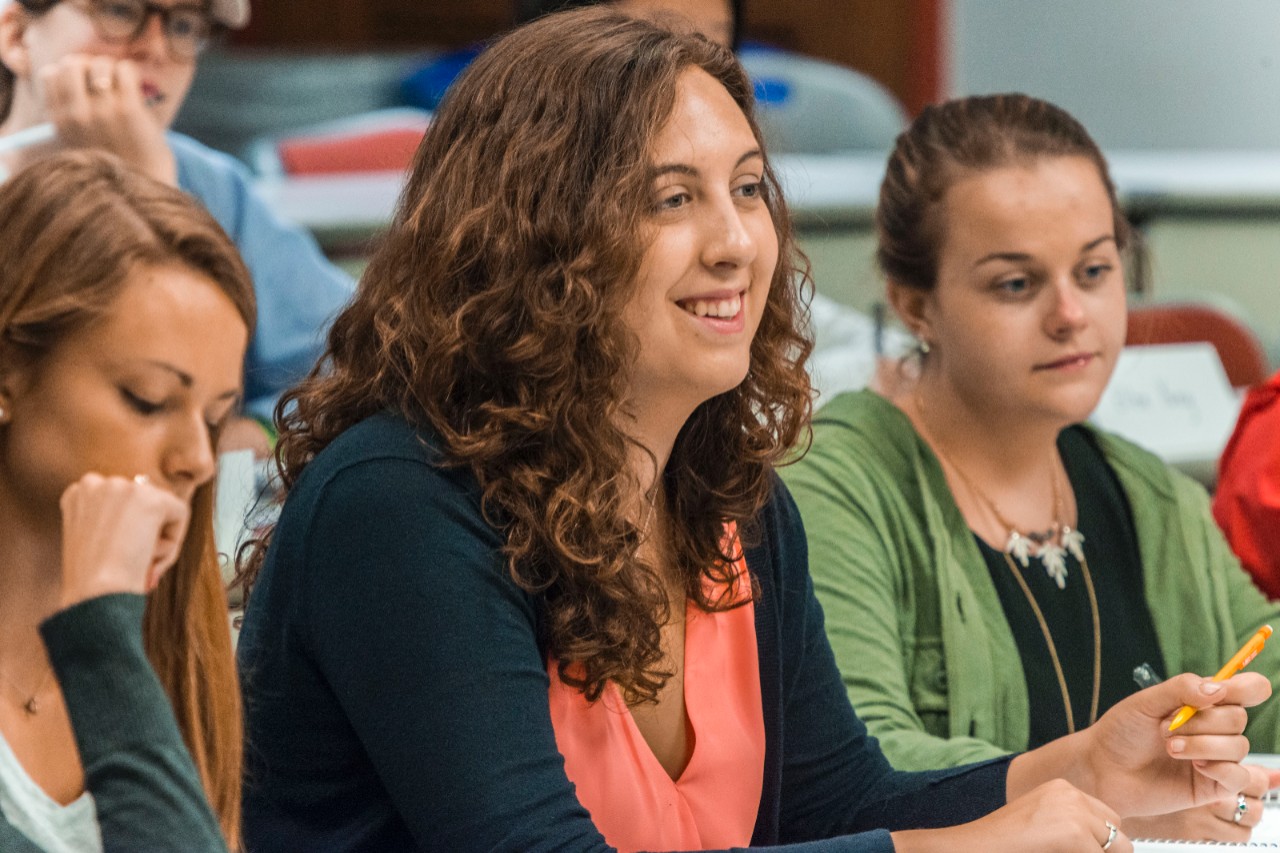 The rising junior decided that she would pile on the Carroll School accounting courses over the next two years to fulfill the requirements for taking the CPA exam around the time she graduates. (A student can sit for that exam without formally majoring or minoring in accounting.) In other words, she was pivoting from pre-law to accounting—while retaining her passion for Spanish language and literature.

“When I started this program, I didn’t expect to leave with a completely different future,” said Calderone, who is from western Massachusetts.

Not all Catalyst students have such epiphanies, but each one is seeking some way to blend the liberal arts with a foundation in the core disciplines of management, says Billy Soo, who spearheaded the program as a professor of accounting and chairman of that department.

“They take the same set of [core] courses that our students at the Carroll School take,” said Soo, who stepped into a new role in June as Boston College’s vice provost of faculties while continuing to coordinate Catalyst. He cites accounting, finance, marketing, operations, ethics, law, and strategy, among other topics packed into the full-time, five-day-a-week program.

“They get all of that, while retaining all of the advantages of a liberal arts background,” Soo added, citing the analytical and communications skills as well as the multi-disciplinary perspectives that come with the liberal arts. “To me, it’s a powerful combination.”

Employers agree, but since the financial crash of 2008 they’ve been reluctant to put resources into training liberal arts students.

“They’ve been saying, ‘It’s too costly for us to be doing this. We should simply demand that anyone we bring in have the business skills,’” Soo related. “They still love the liberal arts background, but they also want students to know how to use Excel, know the basic concepts of accounting, marketing,” and other disciplines, he said.

In view of this, a number of management schools at top universities have begun offering Catalyst-like programs—usually running barely half as long as Boston College’s full-summer offering. “I don’t know of any other program that spans this length and depth of coverage,” said Soo, noting that each class within Catalyst is rigorous enough to satisfy the requirements of a Carroll School introductory course.

Most of the students take Catalyst during the summer after sophomore year. That way, they can discern which field of management (if any) interests them and can use that understanding to help guide their course selections during the following two years. They’re also better able to position themselves for a high-quality internship after junior year.

Ryan Marti, MCAS ’17, enrolled in the program last year as a double major in English and economics. This year, he landed a summer internship at KPMG LLP’s Financial Management group, which is part of the professional-service company’s consulting practice. During his first few weeks there, Marti was tasked with designing an Excel template that reconciled different reporting data and created a PowerPoint presentation that served as a final report to a client, among other assignments. He says he would have been unprepared for such an internship if he hadn’t taken the summer dive into management studies.

A native of Long Island, New York, Marti points to not only the intensive courses but also to weekly career panels that Catalyst students attend in the evening (organized by Amy Donegan, assistant dean for undergraduate career advising). “They gave us candid and fascinating perspectives on the corporate world,” said Marti, referring to sessions that feature Boston College alumni from a variety of management fields. “And sitting in one of those seminars one night, I decided I wanted to do consulting.”

Shortly after the internship, he accepted an offer to return as an advisory associate in the Financial Management practice.

Professor Thomas Wesner (Business Law and Society) notes that students like Marti come to the program with an unusually pure desire to learn—aided by the fact that their Catalyst grades are not calculated as part of GPA. Catalyst and its courses appear on transcripts but the grades do not.

“They aren’t here to nail the test,” Wesner says of the liberal arts students. “They’re here because they want to be here. They want to be exposed to all of the functional areas of management.” The business law professor has taught in the program since the beginning, has served as its assistant director, and will now become director with the departure of Soo.

A Theater Degree on Wheels

Altogether, 136 students have come through Catalyst, and 53 have since graduated from Boston College. They’ve gone on to companies ranging from KPMG and PricewaterhouseCoopers to Accenture, Oracle, and Raytheon.

“It never occurred to me that Catalyst would give my theater degree wheels in the business world,” said Robinson. But that’s what happened.

With his theater background and exposure to business through Catalyst, he wound up with Rock Ventures, which coordinates the Quicken Loans family of companies and focuses in part on urban economic development. In that job, he is coordinating the creation of a state-of-the-art performing arts center in Detroit. “So I was able to leverage my theater experience to get a job I would have never thought of before,” Robinson said.

Incoming director Wesner points out that Catalyst is constantly tweaking its offerings. For example, much-in-demand courses in leadership and “big data” were added to the curriculum this past summer. “And there’s room to grow,” he said, citing the possibility of drawing more students from beyond Morrissey and Boston College. This year there were three: one from the Lynch School of Education, one from Middlebury College, and another from Georgetown University.

Wesner added, “We want liberal arts students to have a good answer when employers ask the inevitable question, what can you do on Day 1?”