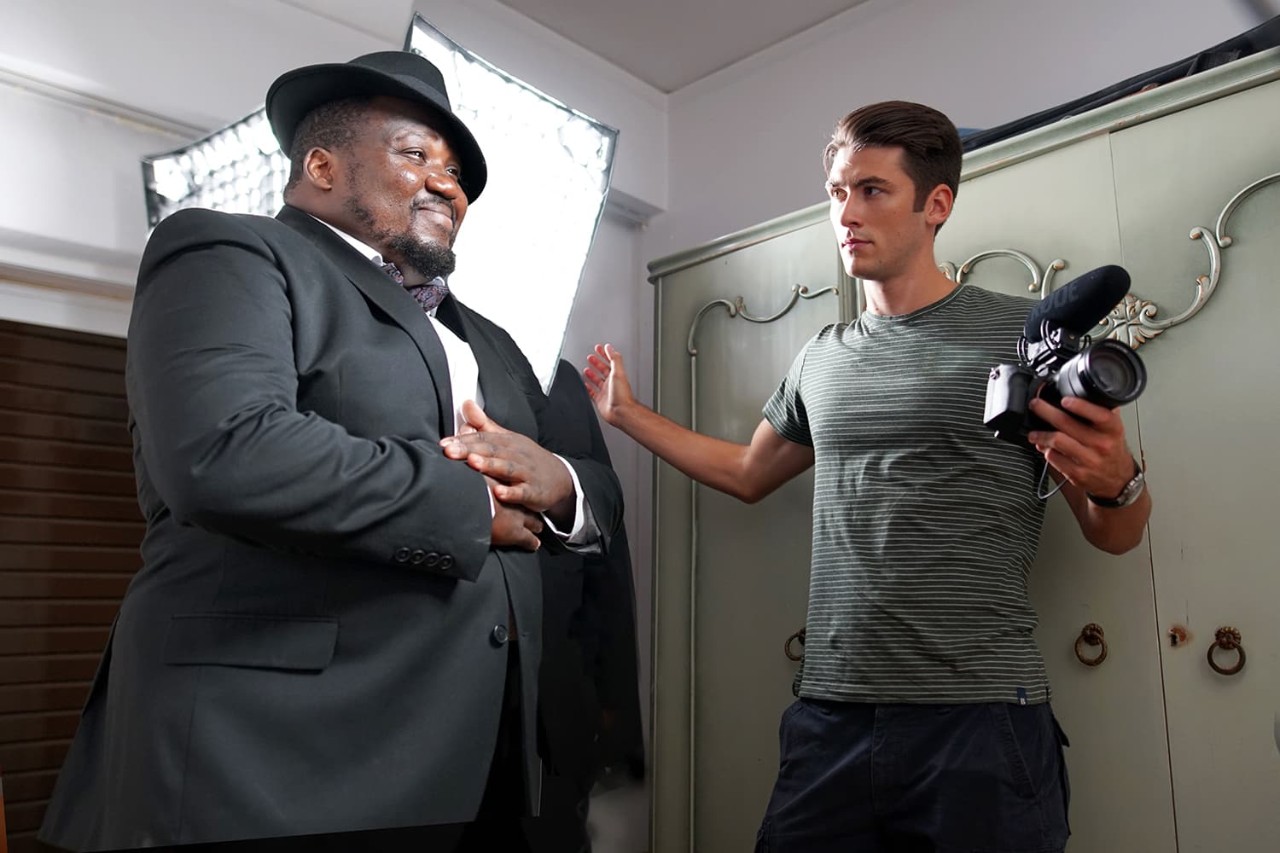 Angelos with actor Jerome Kaluta during the making of his short film, “Colorblind,” in Athens Greece (Photo by Mihailos Kalogerakis)

"If you think you are too small to make a difference, try sleeping with a mosquito." (Dalai Lama)

Angelos Bougas, a Senior majoring in Film Studies, recently wrote, directed, and produced the short film, “Colorblind.” Says Angelos, "Over the summer, while millions across the United States were taking part in protests to support the Black Lives Matter movement, I was with my family in Greece, unable to participate. I wanted to find a meaningful way to show my support, and that is how I came up with the idea to create this short film, Colorblind.

The aim of the film is to highlight the systemic problem of violence against people of color and to elevate racial consciousness. I strongly believe that creativity is vital for the existence of safe spaces that promote learning and discussion on issues of race.”

Not surprisingly, Angelos’s professors in the film department speak highly of his talent as a filmmaker, his creativity, and his commitment to social justice:

“At the end of the memorable film Casablanca, as Rick walks off with Captain Louis, Rick says to the French officer, "Louis, I think this is the beginning of a beautiful friendship…" A coincidental meeting with Angelos Bougas at the Chocolate Bar in Stokes several years ago has led to not only a beautiful friendship, but a professional cinematic collaboration that led this highly gifted student filmmaker to Germany, France, and Lithuania in pursuit of social justice narratives. In each country, with grants from the Jacques Salmanowitz Program, he produced footage that is visually striking and most socially enlightening. My wife Susan, a fellow traveler, and I wish Angelos all the best as he heads off to a brilliant career in the media.” (John Michalczyk, Professor and Director of Film Studies)

“Angelos is one of the most gifted BC undergraduates I have had the pleasure to work with. His talents as a film maker are extraordinary for someone so young. His documentaries for the Guestbook Project on refugees and immigrants have had a deep impact on our viewers. He is a rare, generous and inspiring young artist.” (Richard Kearney, Charles Seelig Chair of Philosophy at BC and international director of the Guestbook Project).

“I not only had the pleasure of having Angelos as a student in my Cinematography class, I also traveled to Munich, Germany, to film a documentary with Professor Michalczyk. Angelos has proven himself to be resourceful, creative and incredibly talented in his camera-work, specifically with drones.” (Robert Heim, Film Studies faculty)

I recently spoke with Angelos about his experience as a student at BC, as well as his life goals.

Why did you decide to become a Film Studies major?

For as long as I can remember, I distinctly recall my father videotaping some of my childhood’s most intimate moments. This constant exposure to film allowed me to develop a very personal connection with cameras, eventually pushing me to pursue my own desire for directing and producing.

Whether it is something personal, or an important social problem that exists in the world, film has provided me with the opportunity to capture precious moments, give attention to global issues, and tell stories that I want to be remembered.

How does it relate to your overall program at BC?

Through various Boston College grants, I had the opportunity to pursue sociopolitical film projects around the world. These experiences made me realize that a strong knowledge of politics and cultures would add immense value to my projects.

While time constraints did not allow me to pursue a second major in International Studies, I was able to take an IS minor with a focus on Cooperation and Conflict. Overall, the international studies minor better equipped me to recognize a valuable story, while the Film Studies major gave me the tools to tell it.

What film teachers and/or courses have inspired you?

Professor John Michalczyk, the director of the film studies program, has been my great mentor. He treated me like family since we met during my freshman year and has constantly and enthusiastically provided me with opportunities to create, learn, and grow.

Professor Charles Derber’s “Peace or War” class and Professor Richard Kearney’s Guestbook Project Initiative have also been incredible sources of inspiration. Professor Derber has pushed me to look beyond news headlines in search of political truth, while Professor Kearney has showed me the value of selfless humanity.

Have you had internships or summer jobs in the film studies area? What have you learned?

During the summer of my sophomore year, I worked as the assistant for the creative director of Deadline Hollywood as part of the Cannes Film Festival. Over the other summers, I worked on various creative projects.

My experiences have taught me that the creative world has countless opportunities to offer, and the best way to find what fuels your passion is to experiment.

What do you plan to do after graduation?

My plan is to work on a business start-up in Zambia with one of my closest friends from Georgetown University.

How do your film studies relate to your career goals?

Whether or not my career ends up being centered around film production, my goal is twofold. First, I want to take an active role in bringing positive sociocultural outcomes. Second, I hope to be able to spread my creative ideas through passionate, inspiring, and humane work.

What advice would you give to students in the Film Studies program?

Take advantage of the numerous grant opportunities that BC has to offer and constantly push yourself to create. Personal passion projects are an excellent way to get attention. Seek out advice from others and do not be afraid to fail. You will be impressed by how much you will improve from project to project. Display your most proud work on your website and keep creating. Your portfolio is your lifeline.

Angelos was born and raised in Athens, Greece. He loves fitness and jazz music, and takes every opportunity he can to explore new cultures, always carrying his drone.