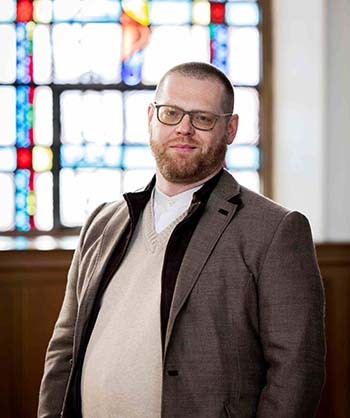 A life-long New Englander, Callid Keefe-Perry is a first generation college graduate whose teaching and research orbit around explorations of imagination, spirituality, and education as sites of individual and social formation. Prior to STM, he served as a Lecturer in Practical Theology at Boston University, where he also worked as Assistant Director of Contextual Education. Before Keefe-Perry’s career in the academy, he was a public school teacher and worked in leadership for several arts-based non-profits. He was the primary architect of the 2017 merger that became ARC: Arts | Religion | Culture and is the Senior Editor for the Journal of the Arts in Religious and Theological Studies (ARTS). His first book, Way to Water: A Theopoetics Primer, details the academic history of the field of theopoetics, arguing for its utility in contemporary Christian congregational life.

Keefe-Perry’s current scholarship engages themes of theological anthropology, public and practical theology, critical pedagogy, creative practice as spiritual practice, and consideration of religion and spirituality in public education. He is the assistant director of the Religion and Education Collaborative and is especially interested in exploring issues related to moral injury and trauma as they relate to learning and spiritual formation. As a researcher, he utilizes mixed-method approaches, doing constructive theological and philosophical inquiry while drawing on qualitative and quantitative techniques of social science.

Confessionally, Keefe-Perry’s outlook is greatly shaped by The Religious Society of Friends (Quakers), especially streams of that tradition emphasizing Christocentric mysticism. He is a Member of Fresh Pond Meeting; a host of the worship experiment, Three Rivers; and an endorsed public Traveling Minister within and beyond his denomination. As a retreat and workshop leader he usually offers insight into the use of creative practices in spirituality, vocational discernment, organizational change, or Quaker spirituality. He thinks it is OK for religious people to laugh a lot, that power cedes nothing without demands, and that creativity is a vital quality of adaptive and effective leadership.

Appointments with Callid can be booked here.

“More Fully to the Risk: Hip Hop as Anatheistic Resistance.” In The Art of Anatheism. Rowman & Littlefield International, 2018: 163-174.

Way to Water: A Theopoetics Primer.
Eugene, OR: Cascade Books, 2014.