Afghans at Fort McCoy have settled into a routine, BC social worker says 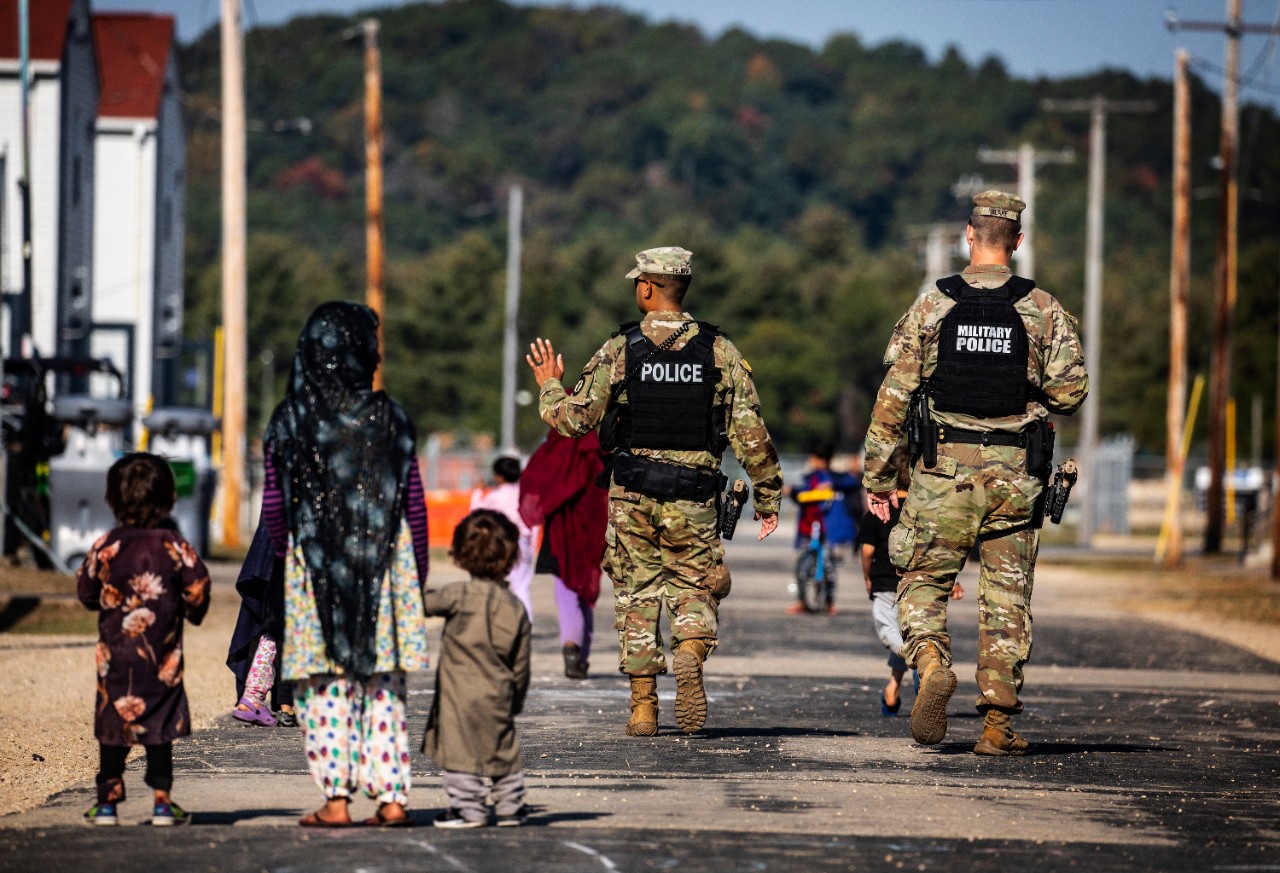 U.S. military police walk past Afghan refugees at the village at the Ft. McCoy Army base. Barbara Davidson/Pool Photo via AP

The Afghans living at Fort McCoy in Wisconsin after being forced to flee their homeland in August have settled into a routine, said Maryanne Loughry, a part-time faculty member at Boston College who has visited the military base twice over the past three months.

As they wait to be resettled, she said they are playing soccer, sewing their own clothes, and teaching English classes.

“You can see a lot more activity now. People are more relaxed in their environment,” said Loughry, a mental health expert in the School of Social Work who doubles as a consultant for the Jesuit Refugee Service, a Catholic nonprofit that advocates for displaced people in more than 50 countries. “The more they are engaged in the process, then the better their well being.”

Fort McCoy, about 100 miles northwest of Madison, is one of eight military bases in the United States that is being used to house Afghans after the Taliban seized power in Afghanistan. The militant group took control of the country just two weeks before the U.S. was set to complete its withdrawal of troops after a 20-year war.

Since the Taliban took over Kabul on Aug. 14, the U.S. has evacuated nearly 130,000 Americans, Afghans, allies, and other people at risk. About 53,000 Afghans are now staying on the bases across the country, half of them children.

Loughry visited Fort McCoy for the first time in August, shortly after being recruited by the United States Conference of Catholic Bishops to provide emergency support to 2,000 evacuees at the base. At the time, she described the Afghans as exhausted, bewildered, and unsure of what’s next.

When she visited Fort McCoy in late October, the base had grown into a small city of more than 10,000 Afghans. They were living in neatly arranged barracks and eating takeout, she said, organizing running groups, and using WhatsApp to text family back home.

During her first stint at Fort McCoy, Loughry helped to create a wellness center at the military base with puzzles for infants, crayons for kids, and sporting gear for adolescents. The space, she said, included a tea room for Afghan women to get together, relax, and talk to volunteers.

After returning to campus in September, she teamed up with colleagues in the School of Social Work to recruit alumni to work at three military bases. Over the past few months, graduates have partnered with USCCB to oversee volunteers, coordinate well being initiatives, and manage legal programs.

“We’ve been checking in with the alumni to make sure they’re okay,” said Loughry. “They’re finding it a very challenging, very time consuming, but very fulfilling role.”

Some Afghans, she said, have left Fort McCoy for new homes in places like California, Virginia, and Washington, D.C. But most of them are still waiting to be resettled in the U.S., partly because of the lack of affordable housing. While the Afghans remaining at the military base don’t know how long they will stay there, all of them will be allowed to rebuild their lives here.

As Afghans at Fort McCoy await resettlement, Loughry discussed her efforts to recruit alumni, the mental health of the evacuees, and the hurdles they will face in the U.S. 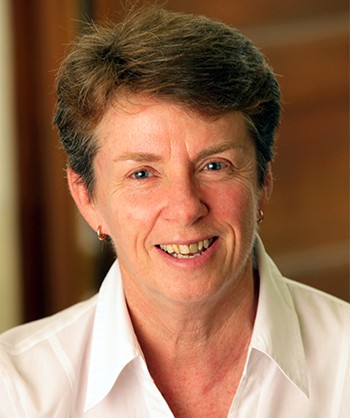 How did you recruit alumni to work on the military bases?

When I came back to Boston College in September, I was aware that we had a lot of resources in the School of Social Work. And the United States Conference of Catholic Bishops was still looking for staff fairly quickly for a number of the bases. I worked with Cindy Snell, the director of career services, to send out a call to alumni of the School, especially those who had studied in the global field of practice, to see if anyone was available to volunteer. But then some paid positions became available, and we were delighted that there were a number of our alumni who were offered short term and then longer term positions on three different bases. When other positions become available, we send out further requests to alumni.

The New York Times reported that Afghans at Fort McCoy are playing pickup games of soccer with soldiers, studying English, and making arts and crafts with volunteers. From your perspective, what is daily life like for the Afghans at the military base now?

I saw a number of things that have changed since I first visited the base in August. You can see a lot more activity now. People are more relaxed in their environment. When I arrived in October, there was a lot more engagement with the Afghans themselves, who were working on the programs available on the base. A lot of the Afghans were helping to teach English to younger children and adult women. Some of the Afghans were also helping with the recreational activities. There was a great deal more engagement of the Afghans than when I was there at the start. It makes sense, because at the start, people were preoccupied with their own processing and their own medical appointments and their own legal appointments.

There have been some very good programs set up, including sewing centers so that women, with the assistance of some of the tailors in the community, are able to make clothing that’s more suitable for what they want. And now, because winter is coming, the wellness centers are also setting up some very big recreational spaces in warehouses, so there can be indoor recreation for men, for teenagers, and also for women and children. Around the base, people are organizing themselves into fitness groups and running groups, but we’re mindful that once winter comes, that will need to be indoors.

The more they are engaged in the process, then the better their well being. When I returned to the base in October, it was evident to me that there was a lot more activity, a lot more people outdoors, and a lot more people able to do things for themselves rather than having things done for them. There’s also been a lot of work to ensure that the people now have access to Wi-Fi so that they can use different communication means, including WhatsApp, to communicate with their family in the U.S. and in Afghanistan.

All of these things are contributing to people feeling that they’re a bit more able to manage their lives. We would expect in a population like the one that I’ve been with that there will be a lot of distress at different times because they’re concerned about their family back in Afghanistan, but we’re also aware that that can often be managed by good communication and letting the people get on with managing their own lives.

About 9,000 Afghans have left military bases and resettled in local communities across the country. What are the biggest challenges they will face as they adjust to their new lives?

The resettlement agencies are trying to ramp up because there’s not a lot of affordable housing to put the Afghans into. There’s a bit of apprehension that people will be staying for some time while the resettlement agencies find the appropriate services. The Afghans are quite positive. Most of them want to work and study. But one of the challenges is that a lot of them have brought their extended family with them, and not all of their family can speak English at this stage. Some of them are older and they will struggle to find a role in the wider community. They’ll be welcomed in the Afghan community, but the wider communities will be a challenge.

There’s quite a bit of discussion on the bases about where Afghans can be resettled. A lot of people want to go where they know there’s a big Afghan population in the U.S., and that tends to be in Virginia and in California. But there’s a great deal of awareness that everybody can’t go to those two places, so there have been lots of discussions about alternatives focused on where the jobs are and other places with affordable housing. After they’re assisted with their resettlement, they’ll have to find their own accommodations, and that will need to be in a place where they can afford to be.

When I was coming back to Boston in October, I was on a plane with about 20 people who were going to resettle. And they had immediate family in the U.S. Most of them were going to California. There was a single man who was going. He hadn’t met his parents for six years and they were in California. There was a woman with her child going to meet her husband. They were quite excited, but apprehensive at the same time. But it was quite exciting to be with them and talk with them. What was also apparent is a number of them only had one small backpack—all they owned they had with them. And they’re going, as they said, to a whole new start in their life.

How have you used your skills as a social worker to help improve life at Fort McCoy?

In humanitarian work and refugee work, we have some very good guidelines for helping people improve their well being. So there are specific guidelines around setting up and creating safe spaces for children and for women. And so I was able to bring those guidelines to the leaders of the programs at Fort McCoy. For example, we have focused on how to manage large groups of children. How can we keep them playing with the toys in the wellness centers, but then make sure they leave them there when they return to their barracks? I have also worked with behavioral health experts to help recognize signs of distress in children and in adults in the wellness centers, with the goal being to de-escalate any events or make appropriate referrals before anything happens that gets out of control. We’ve also looked at the volunteers themselves, and how we can help to make sure that they do not burn out or overextend themselves.