Focusing on Diversity from Day One

M.B.A. Class of 2023 starts off with workshop on “inclusive leadership”

When the full-time M.B.A. class of 2023 started their Carroll School graduate education on August 19, they kicked off not with an accounting lesson or a primer on economics or even a tour of campus. Rather, their orientation began with a question. 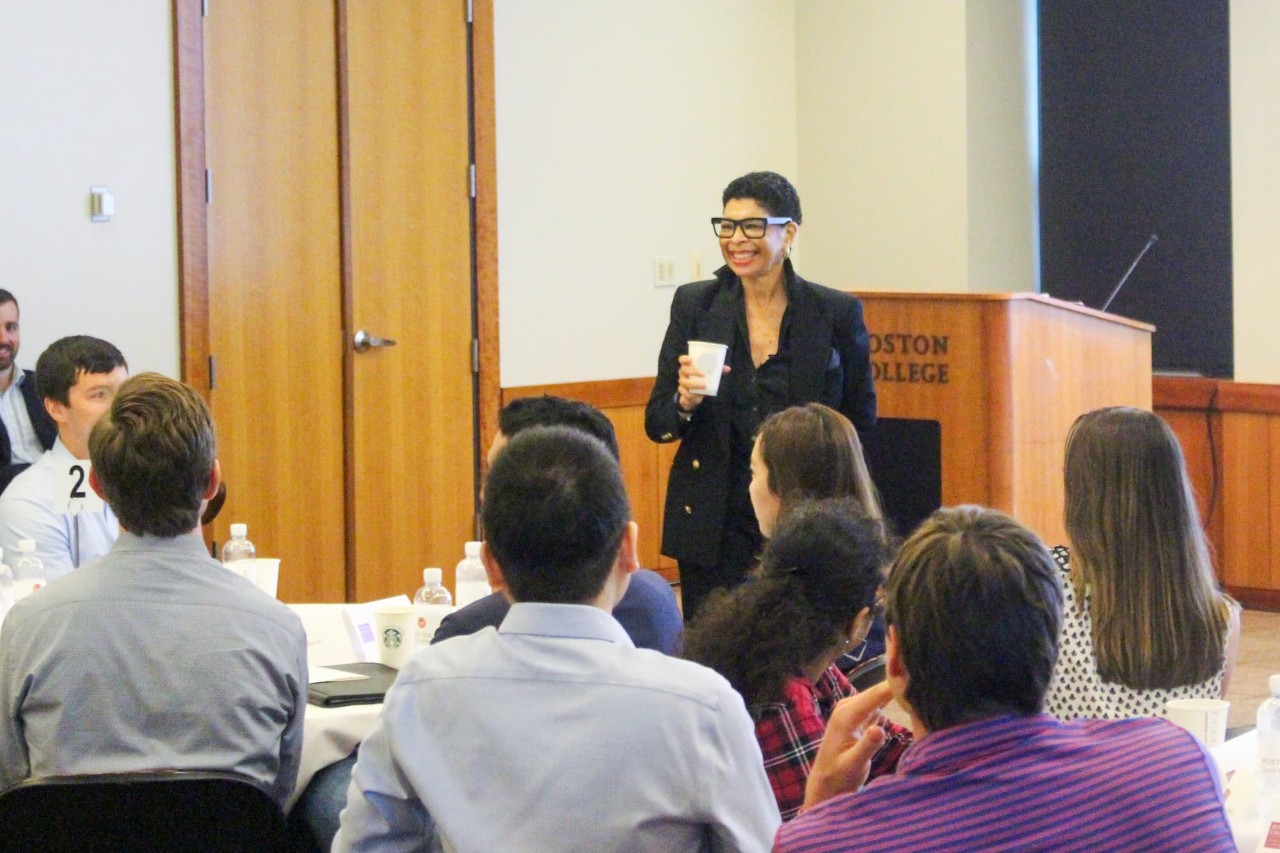 “When we talk about diversity, everyone is included. Do you agree?” Noted diversity expert and Carroll School Board of Advisors member Carol Fulp’s voice echoed through the large conference room.

She was answered with tentative murmurs. She asked again, repeating the cue for a call-and-response. This time, the response was an unequivocal “Yes!” from the nearly 100 members of the full-time M.B.A. Class of 2023 who were assembled for their first-day M.B.A. orientation.

Fulp’s question was part of a dynamic session that opened the daylong, in-person M.B.A. orientation. Although it did involve homework preparation (students read a Harvard Business School case study on “African American Inequality in the United States”), the presentation didn’t feel like just an academic lecture. Students workshopped their own examples of workplace microaggressions, Fulp shared personal stories about her experience marching on Washington with the Civil Rights Movement, and, over the course of the two-hour talk, the room slowly shifted from a nervous group of a hundred strangers into an M.B.A. cohort.

Although the conversation was wide-reaching, Fulp kept bringing the audience back to two cornerstones: history and business.

“We need to know our past in order to understand our present so we can shape our future,” she said, pointing to the long-lasting impact of slavery and institutional racism throughout U.S. history. In discussing the case-study reading, which covered the history of Black inequality in America from the slave trade through modern day, Fulp asked students to call out words that came to mind while reading the study. Responses included words like “frustration,” “anger,” and “systemic.” “This is a subject that is our original sin,” Fulp replied.

One international student offered an outsider’s perspective, reflecting on her dismay about instances of American police brutality such as the George Floyd killing: “Why does another person need to go through this for people to come out on the street to fight? It should have stopped the very first time this happened and it didn’t. There should be stricter, stronger reforms, and we shouldn't be waiting for the next person to suffer in order to make changes.”

The Business Logic of Diversity 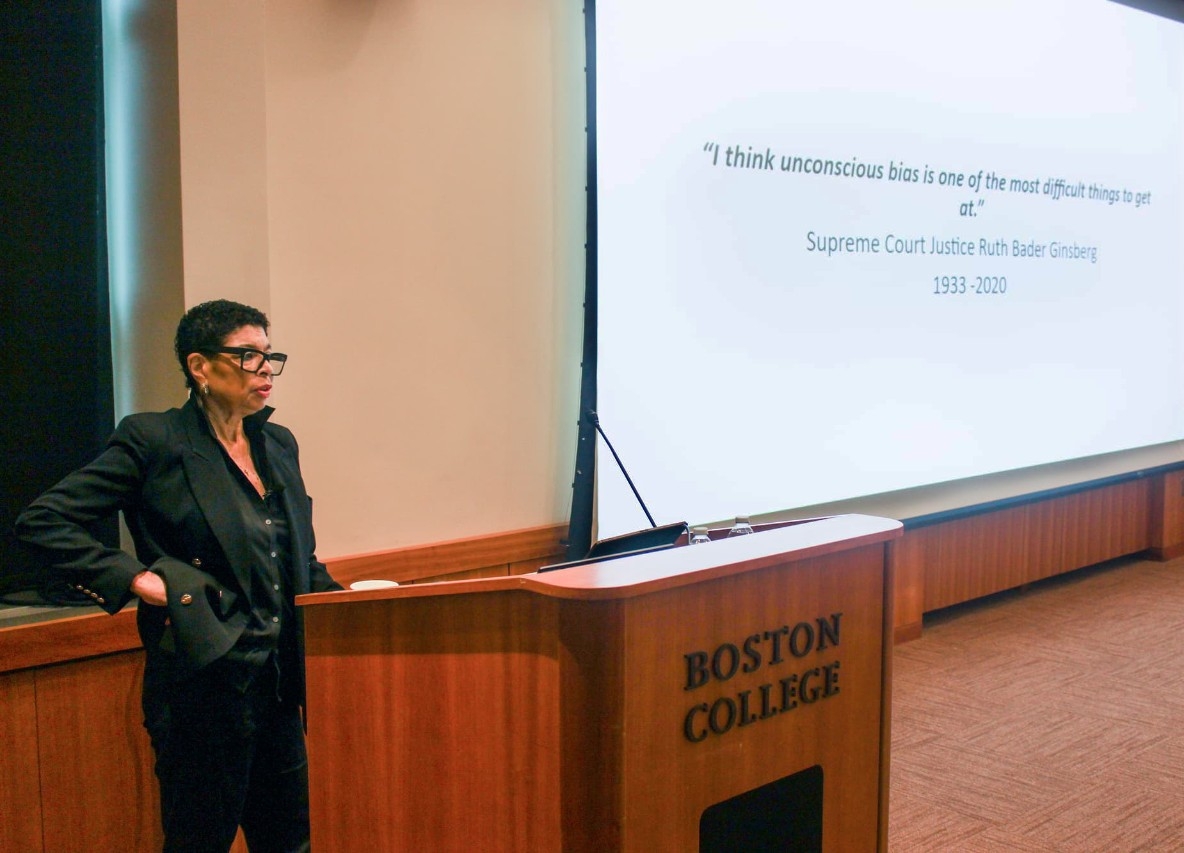 Fulp’s second cornerstone, business, offered a light at the end of the tunnel. “We cannot change the past, but we can learn from it,” she said, explaining that the Class of 2023, as “future leaders,” had both a responsibility and an opportunity to be “inclusive leaders.”

Inclusive leadership doesn’t only come from a place of virtuousness. It’s also good business, Fulp told students: “It’s not about feeling good, it’s about winning,” and the leaders who win are those who “hire the best talent of all kinds.”

Fulp’s talk inaugurated the M.B.A. orientation, but it was also a continuation of programming from the previous year. The Carroll School’s Inclusive Leadership Forum Series, co-hosted by Fulp and Dewin Hernandez, M.B.A./M.S.W. ’21, was launched in 2020 and brought students in the Carroll School’s graduate programs together (virtually) for discussions on the subject of diversity and inclusion. Like Fulp’s talk at the M.B.A. orientation, the forums also highlighted the business value of diversity.

For the M.B.A. Class of 2023, the value of diversity wasn’t a new idea. In her welcoming remarks, Associate Dean of Graduate Programs Marilyn Eckelman highlighted “the number of you who mentioned ‘furthering social justice’ as a personal goal in your applications.”

The diversity of the Class of 2023 was also on display later in the day during a session where students introduced themselves. The full-time M.B.A. class of 2023 includes students from as far away as South Korea, India, and Pakistan and as nearby as Newton, Massachusetts. With 42 percent of students identifying as female, the class is closer to gender parity than the majority of M.B.A. programs across the country.

Students had worked in finance and marketing, but also in aerospace engineering, surgical robotics, and as a writer for World Wrestling Entertainment (WWE). There were entrepreneurs, parents, military veterans, and students who had just finished their undergraduate degrees in the throes of a pandemic. Students cited a variety of motivations for enrolling in the BC M.B.A., but a common thread was the desire to learn, not only from faculty and instructors, but also from the diverse perspectives of their fellow students and the wider Boston College community.

Orientation day closed with a Q&A panel of current M.B.A. students. Questions ranged from networking and internships to classroom dress codes and the best places to buy affordable textbooks. When asked what piece of advice they wished they had heard at the beginning of their M.B.A. journey, one current M.B.A. student paused for a moment and said: “Be vulnerable and brave. Be bold.”

Rachel Bird is a content development specialist and part-time M.B.A. student at the Carroll School of Management