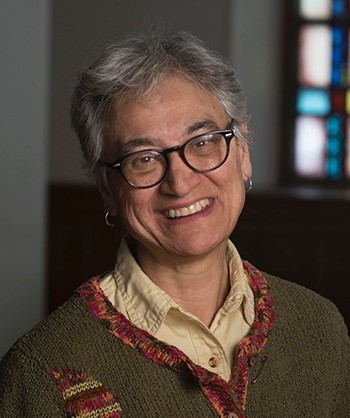 Mary Jo Iozzio, Ph.D., earned her doctorate in Systematic Theology with a focus on Moral Theology from Fordham University (1994); and, in an earlier program of graduate studies at Fordham, she earned the MA in the History of Religions (1984). In between these studies she earned an MA in Biblical Studies from Providence College (1987). Before coming to the STM, she was Professor of Moral Theology at Barry University, Miami Shores, FL (1993-2013), and adjunct instructor at Fordham University, Providence College, and the University of Rhode Island. She has been formed by both religious and secular education systems:  the Dominican Sisters of Newburgh, NY, who ran St. Mary School, and John F. Kennedy P.H.S. in Paterson, NJ, and the Pennsylvania State University (BA Ancient History, 1977). Her personal and professional life have been marked —happily she adds—by the Jesuits, Dominicans, and Benedictines (whose monks welcomed her into their daily life at the Abbaye du Mont Cesar/Abdij Keizersberg, Leuven, Belgium).

She serves as inaugural member on the American Academy of Religion, Committee on the Status of People with Disabilities in the Profession and as co-chair of its Religion and Disability Studies Group; as a public member on the American Board of Plastic Surgery, Board of Directors; as a member of the Bon Secours Health System Inc, Ethics Advisory Group; as an elected member on the Catholic Theological Society of America; as an appointed member of the Society of Christian Ethics, Professional Conduct Committee