Interreligious Dialogue and the Cultural Shaping of Religions (2011)

Interreligious Dialogue and the Cultural Shaping of Religions

The global mobility of religions has raised a series of practical and theoretical questions regarding the mutual shaping of religions and cultures, and the role of interreligious dialogue in the process of cultural and religious change. As religions negotiate the challenges of adapting to ever new cultural environments, they inevitably encounter the traces (linguistic, conceptual, ritual) which previous religions have left on a particular culture. The process of inculturation thus generally leads to some form of implicit or explicit dialogue between religions. While in the past the reality of religious borrowing tended to be downplayed or ignored, the present atmosphere of openness allows for a more conscious process of learning from the religion or religions which have shaped a particular culture, and from the ways in which they have dealt with particular cultural challenges.

The reality of religious globalization also raises fundamental questions about the relationship between religions and cultures. Religions tend to enter new cultures shaped by the culture in which they arose, or which they previously encountered. To which extent might this pose limits on their adaptability to new cultural contexts? And to what extent are cultures so defined by particular religions that they are limited in their receptivity to other religions?

At this symposium, we will focus on different case studies, both past and present, in so far as they shed light on the broader questions of the intersection between interreligious dialogue and cultural adaptation and change.

Note: Papers from this event have been published in Interreligious Dialogue and Cultural Change, Catherine Cornille and Stephanie Corigliano, eds. (Oregon: Wipf and Stock, 2011)

Proponents of interreligious dialogue often focus on social action and economic advancement as a privileged occasion for collaboration and productive exchange between religions.  Even though economic realities are governed by their own logic and systems, religious beliefs and practices may have a profound effect on socio-economic structures and developments.  At this conference, we will focus on how religious beliefs may and do affect economic praxis and on how dialogue between religions may enrich particular conceptions of market economics, and improve socio-economic relationships between individuals from different religious groups and cultures.

Papers may deal with economic theories and principles linked to a particular religious tradition, with the extent to which these theories may contribute to economic development in a particular context or in a global perspective, and/or with the ways in which one religion has or may learn from the social theories and economic principles of other religious traditions.  Some may focus on historical examples of the way in which interreligious dialogue has led to socio-economic development, while others may advance more theoretical and hypothetical proposals of how religions may work together to improve economic relationships in different parts of the world, or to offer alternatives to prevailing conceptions of economic development. 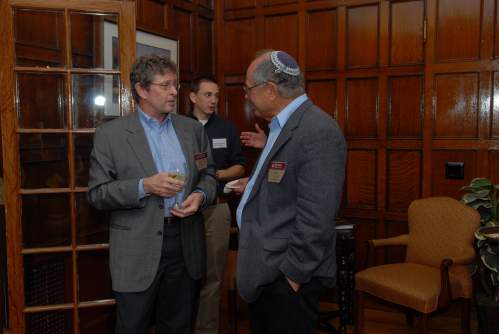 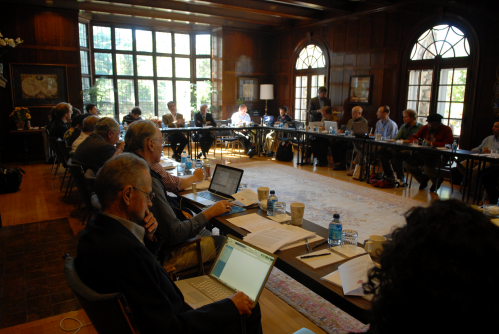 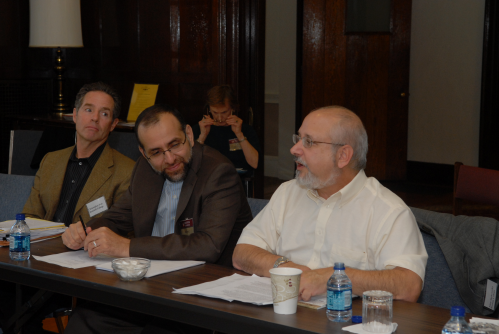 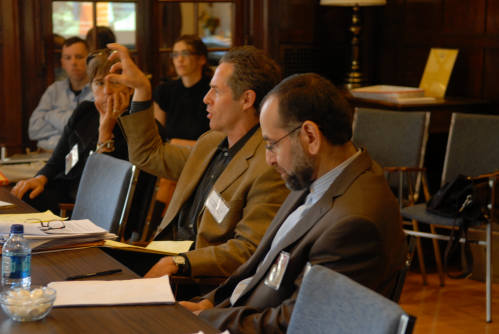 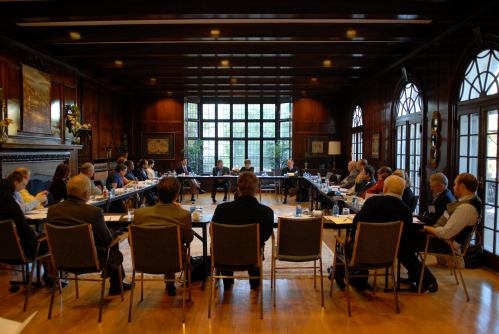 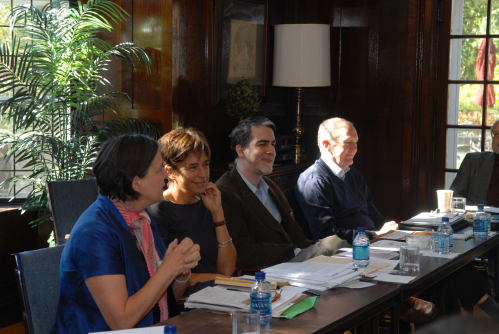 Understanding the Religious Other: Western Hermeneutics and Interreligious Dialogue (2009)

Understanding the Religious Other: Western Hermeneutics and Interreligious Dialogue

This paper will address the difficult question of whether modern Western hermeneutics (especially those of Gadamer and Ricoeur) are helpful as heuristic guides for interreligious dialogues. The claim will be that Gadamer's model of conversation is indeed a helpful one and that Ricoeur's addition of explanatory methods and hermeneutics of retrieval and suspicion are also relevant.  However, I will also claim that there are serious limits to the present hermeneutic models:  namely Gadamer's idea of "fusion of horizons" and Ricoeur's notion of "appropriation."  These hermeneutic claims must be faced with the question of radical otherness. This was central in the exchange between Gadamer and Derrida as well as Ricoeur and Levinas. Clearly radical otherness and difference are present in interreligious dialogues. The question of otherness and difference in a context of a revised hermeneutics will be posed as a possible heuristic tool for interreligious and intercultural dialogues.

The dialogue between religions presents various hermeneutical challenges.  On a purely epistemological level, it involves the question of mutual understanding or the degree to which individuals belonging to one religion can grasp the meaning of symbols, teachings and practices of another.  This question has been at the heart of the insider-outsider debate in the study of religions.  But it may be asked anew in the context of interreligious dialogue where religious presuppositions tend to be more deliberately engaged in the process of understanding.  How do religious beliefs and commitments shape one’s selective engagement with and understanding of the religious other?  What is the role of empathy in interreligious dialogue?  And would imperfect understanding of the other necessarily impede constructive dialogue?

Interreligious hermeneutics may also address the dynamics and the ethics of interreligious borrowing, of the appropriation and reinterpretation of particular religious texts, teachings and practices within different religious contexts.  The goal of interreligious dialogue is mutual fecundation and growth.  But in the process of learning from other religious traditions, symbols, teachings or practices often undergo subtle or more pronounced semantic shifts.  Is this to be regarded as an inevitable part of any constructive dialogue between religions, or as an illegitimate form of domestication of the religious other?  These and other pressing questions within the domain of interreligious hermeneutics will be the focus of this symposium. 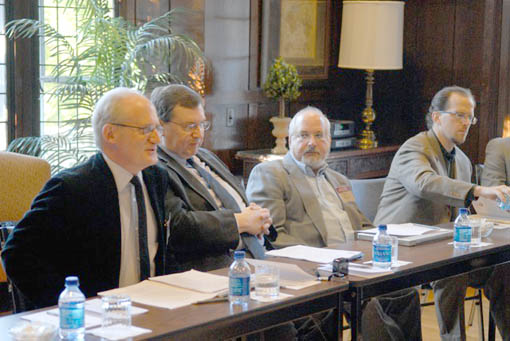 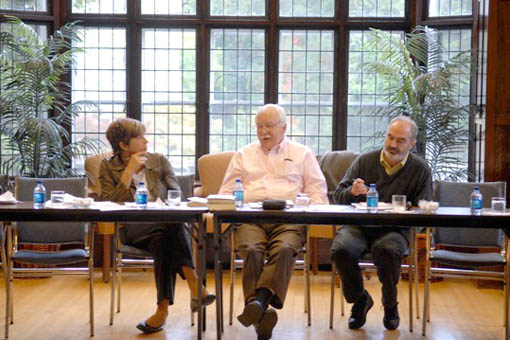 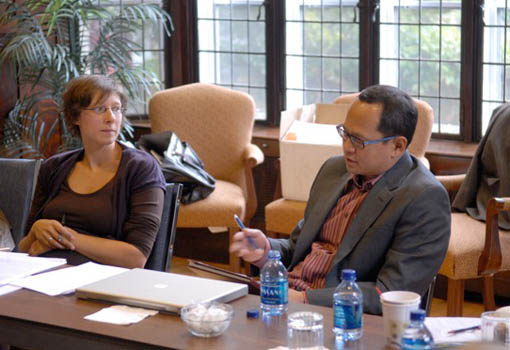 In the process of dialogue between members of different religious traditions, each typically approaches the other from within a particular religious framework which serves as the basis for discerning what is valuable and true in the other religion.  These principles of discernment may be operative implicitly or explicitly and may manifest themselves in the ways in which elements of other religions have been spontaneously assimilated or consciously engaged as an occasion for change and growth.

Within the context of religious pluralism, some theologians engaged in dialogue have moved away from religion-specific criteria of truth in favor of “neutral” or common ones.  However, in so far as dialogue is conducted from within religious traditions, religious criteria will continue to take precedence over neutral ones.  At this conference, we wish to reflect on the principles and processes of discernment which have been and may be operative within particular religious traditions.  These may arise from doctrines, from socio-ethical values and/or from normative practices.

Dialogue Between Muslims and Christians as Mutually Transformative Speech

Note: Papers from this event have been published in Criteria of Discernment in Interreligious Dialogue, C. Cornille, ed. [Wipf & Stock Publishers, Eugene, OR, 2009)

Books from the Interreligious Dialogue Series

Criteria of Discernment in Interreligious Dialogue
Edited by Catherine Cornille

Ritual, Sincerity, and Human Flourishing: What We Can Learn from Chinese Religions

What Can a Hindu Learn from Christianity?

Signs of Hope in Muslim-Christian Relations

Religious Exclusivism and Interreligious Dialogue: Incompatible or Not?

The Challenge of Interreligious Dialogue in the Age of Laudato Si'

Experiences with Dialogue at the Edge of Auschwitz

Revelation in the Context of Interfaith Dialogue