Dianoia: the Undergraduate Philosophy Journal of Boston College was founded in 2011 by three undergraduate philosophy students. The first issue of Dianoia, published in the spring of 2012, was by all standards a great success. However, after publishing two more issues in 2013 and 2014 the journal’s continuity was threatened by a two-year administrative hiatus. In the fall of 2016 a dedicated group of undergraduates, following in the footsteps of the original founders, have committed to resurrecting the journal and looks forward to publishing in the spring of 2017. Dianoia is quite proud of the strength of the BC Philosophy Department, and we believe the quality of the department is eminently clear in the papers. We invite you to read the first three issues here online, and we look forward to continuing to publish the journal annually both online and in print.

Dianoia fosters open philosophical discussion and writing among undergraduate students. The journal is committed to providing the opportunity for intellectual reflection which bridges the academic disciplines in pursuit of holistic understanding.

What does ‘dianoia’ mean?

The ancient Greek word ‘διανοια’ translates as ‘thought’ but connotes a discursive direction or search for a higher form of knowledge. We thus hope to direct philosophical discourse toward an intellectually rigorous level of thinking. 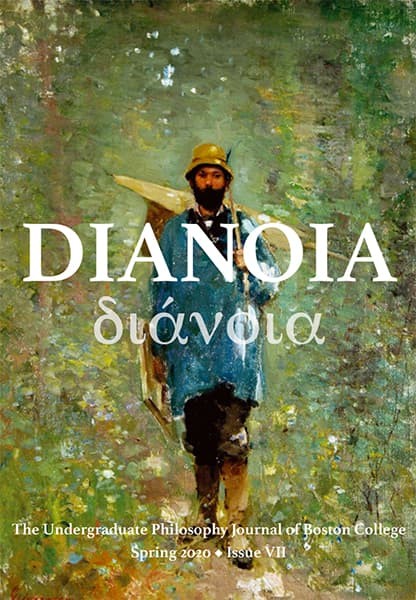 What sort of papers is Dianoia looking to publish?

Dianoia seeks to publish thoughtful, original, and creative essay-style papers on any philosophical idea or topic. Papers must be accessible to a general undergraduate audience. We do not have minimum or maximum page restriction – we encourage creativity and originality, thus the length of the paper is not our primary concern. We welcome your insightful and inspiring papers on philosophy and/or of any philosophic nature (topics may include but not limited to: bioethics, philosophy in literature, philosophy of economics, philosophical theology, philosophy of biology, business ethics, etc.).

If you have any questions or would like to submit your work for review, please contact the journal at dianoia@bc.edu.