How a Border Immersion Influenced My Vocation

“We get lost in thinking that the Gospel is only about warm, easy love, and praying for everyone. While those themes are important, the Gospel call is also a challenge, and requires us to lean into discomfort. If you look at the life of Jesus, you will see that.”  —Maddie Jarrett 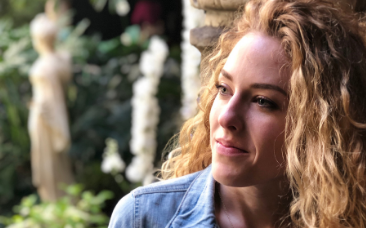 In February 2020, just weeks before the country quarantined to combat COVID, Maddie Jarrett, Mount Alvernia theology teacher, joined 15 Boston-based Catholic teachers and administrators for a five-day immersion trip to the U.S.-Mexico border. The experience was part of the two-month Roche Center course Encuentro: Immigration and the Catholic Educator’s Response, which addresses immigration in light of Catholic teaching and tradition.

“There are a lot of topics to address in a theology curriculum, and the Encuentro course was really helpful for grounding these topics in a particular experience,” explained Maddie, who graduated with a Master of Divinity degree from Boston College in 2018. “When my students leave this classroom or this school, what is most important is their formation as integrated Catholics – or Catholics who are able to see the world not only through their personal eyes of faith, but also through the eyes of the faith community, the Church. The people I met at the border and their stories of suffering and injustice have implications for our Church. As a theology teacher, I try to form students with a sense of responsibility toward and for people who are impacted by injustice.”

In addition to the border immersion experience, the course included two pre-immersion sessions, followed by two post-immersion sessions, which covered the history and political, social and economic causes of immigration; the Church’s teaching on immigration; and how educators can make their classrooms, pedagogies and educational environments more culturally sustaining. The three-hour Saturday morning sessions were held on the Boston College campus and led by expert faculty from the Schools of Education and Social Work and the department of Theology.

For Maddie, the Encuentro experience fulfilled a desire to delve more deeply into the issue of immigration, which she was exposed to as a post-undergraduate volunteer with Amate House in Chicago. During her year with the service and leadership development program, she worked at a small Catholic school that served primarily refugees and immigrants from Ethiopia, Eritrea, and Vietnam.

“I have to acknowledge that I hadn’t given much thought to the issue of immigration until I started entering these spaces with people who had struggled immensely to reach a safe country,” Maddie said.

The insight that continues to impact Maddie’s vocation as teacher and theologian is the awareness of her privilege as a White person and as a citizen of the United States.

“During our conversations on the border, it was stark to be in the same space, breathing the same air, sitting on the same chairs, as people who couldn’t walk into the same rooms as me because of documentation, the color of their skin, or the language they spoke,” she shared. “Just knowing that I could hop on a plane back to Boston, while sitting in a room with people who had traveled hundreds and hundred of miles to try and do the same thing, but were being denied … that was really difficult. There was an unnatural difference in what we were able to access solely because of where we were born.”

For Maddie, this discomfort is not something to be avoided, but rather a central tenet of the Christian call, which she emphasizes when teaching about immigration and what she experienced in the course and at the border.

“It's important to communicate to students that caring about injustice or any issue that impacts the dignity of another human being is part of what it means to be a person of God and to be a Catholic,” she said. “There is no authentic Catholicism without the drive for justice for people and communities that are impacted by issues like immigration. The Gospel often manifests itself as a call into uncomfortable and uncertain spaces. Working for justice is not just a nice thing you do on the side; it’s the core of what it means to be Catholic for me. Although we may be able to live our lives siloed from people who are impacted by issues like immigration, the God of Jesus Christ calls us to acknowledge our responsibility and obligation to move into these uncomfortable spaces. We can’t receive the Eucharist, which is a reminder of Jesus’ own crucifixion and resurrection, and then turn a blind eye to modern-day crucifixions. We must enter into the discomfort that justice requires, trusting that fullness of life can come from those spaces, like it did when Jesus moved into his own suffering and came out resurrected on the other side.”

Since Maddie was interviewed for this article, she has been accepted into a Ph.D. program in Systematic Theology at Boston College. Maddie will begin her doctoral studies in Fall 2021.