Faith and Community Sustain Us

“Most experiences are much more powerful when shared with others, especially when it’s people who don’t agree on everything, but at least share common values around the topic at hand. Community is the basis of everything.” —Caitlin Keeton 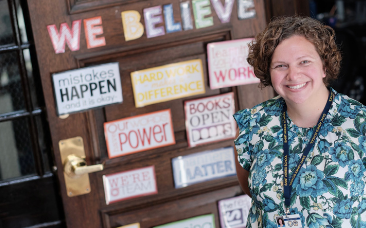 When Caitlin Keeton, former principal of St. Agnes Catholic School in Arlington, Massachusetts, finished college and began her teaching career, she landed in a public school in North Carolina. While it was a wonderful experience and she “loved everything about it,” she shared that there was a nagging feeling that something was missing. And then Hurricane Katrina hit.

“The kids were having a really hard time with all of the death and destruction they were seeing on the news, and it was so hard for me to console them without being able to talk about faith,” she admitted. They were eager to do something, so we ended up creating a walk-a-thon to raise money, which we sent to New Orleans. But it would have been much more powerful if we could have talked about it through a faith lens. It was really eye-opening.”

Shortly after, Caitlin went to confession, where she encountered a priest who told her that she had a very Jesuit way of thinking about things and encouraged her to consider a Jesuit education. After some research, she ended up in Boston as a member of the Boston College Urban Catholic Teacher Corps (UCTC), and began her Catholic school career, which has allowed her to lead through the lens of faith.

“In Catholic schools, we truly do partner with families and have a common goal of not just helping kids learn to read and write, but to help them become who God created them to be. The sense of community is really important.”

Caitlin explained that it was this deep sense of connection and community that ultimately sustained many of the families and students at St. Agnes during the difficult year and a half of the pandemic.

“There has been tremendous loss in our community and seeing our school family come together to support people who are experiencing the loss first-hand has been extremely powerful,” she said.

Over the last two years, Caitlin has participated in three different programs offered by the Roche Center: the Encuentro Immersion course; the summer book club Racial Justice and the Catholic Church; and the Lenten Retreat for Catholic educators.

The Encuentro immersion experience was offered the first three months of 2020, ironically just before the country shut down because of the pandemic. With an immersion trip to the border, and two pre-immersion and two post-immersion Saturday morning classes, the course provided an intentional space for Catholic educators to wrestle with the realities of immigration from the perspective of Catholic teaching and tradition.

“I felt very challenged to consider what it means for us in our current context—in our schools and classrooms—and what role we can play not only as educators, but also as people of faith,” Caitlin said. “There is no substitute for experience.”

Participants in the book club read together over six weeks Fr. Bryan Massingale’s book Racial Justice and the Catholic Church, and met weekly in small groups to listen to guest speakers and discuss the text while also processing their own feelings and reactions.

“The small groups provided a space to be very open and honest with where we were at and to admit that we all have work to do,” Caitlin said. “Community allowed me to explore racial justice in a way that helped me see I still have so much to learn.”

The Lenten retreat was offered in the spring of 2021, as educators approached the one-year mark of teaching in the pandemic. Based on Jesus’ time in the desert, the retreat provided an opportunity for Catholic educators to reflect on their experience of teaching during one of the most difficult times in their career.

“It was one of those things where the well was running dry, and we needed a way to refill it, so the timing of the retreat was perfect in that regard,” Caitlin shared. “Everyone was committed, intentional, and open with their sharing, which is still producing fruit in my spiritual life.”

Caitlin shared that it is the learning intertwined with faith and community that has sustained her in some of her most difficult times as both a teacher and administrator.

“Other programs might offer the academic piece, but don’t always integrate faith or community,” she expressed. “When faith and community are incorporated, it creates an environment that encourages people to be vulnerable and to open up, to ask questions and not feel like they have to start with all the answers. That’s where real community and connection happen.”

Since Caitlin was interviewed for this article, she has moved to Maryland, and is now principal at St. John the Evangelist School in Silver Spring.