New Rankings Put Spotlight on the BC MBA

Both the part-time and full-time MBA programs rise in the rankings, according to U.S. News & World Report
September 28, 2022 | by William Bole

The Carroll School of Management’s Master of Business Administration programs—“the BC MBA,” as they’re known—are rising in the rankings.

According to the just-released U.S. News and World Report survey of graduate schools, the part-time MBA program has reached the top 30 of these programs nationally—five rungs above its ranking in the same survey last year. Meanwhile, the full-time program jumped a few notches to no. 41, and its 2021 graduates netted starting salaries (with bonuses) of $126,560 on average, the survey found.

With the no. 30 spot, Boston College has the highest-ranked part-time MBA program in New England,  ahead of Boston-area counterparts such as Boston University (43rd) and Northeastern (75th). Likewise, the full-time program stands out in New England, behind just three Ivy League schools—Harvard, Yale, and Dartmouth—and MIT. (Those schools do not have part-time MBA programs.)

In the specialty rankings for MBA studies, the Carroll School’s accounting program landed at no. 12 in the U.S. News survey (six steps above last year), while finance held steady at no. 13. In addition, two MBA-related programs unranked last year checked in at nos. 21 and 29 (business analytics and marketing, respectively). 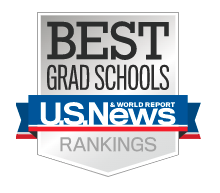 In other data released by U.S. News, 77 percent of the MBA class of ’21 had landed their jobs by graduation day; and the average GMAT score of the entering class this past fall was 644.

The new rankings undoubtedly reflect changes in the Carroll School’s graduate programs over the past few years, said Marilyn Eckelman, the dean of those programs. She pointed to an overhaul of the MBA curriculum, with a focus on high-level skills much in demand across industries and functions.

Key to this change was the introduction of a data analytics sequence of courses, which has “dramatically enhanced the ability of our students to work with data in a multitude of ways,” said Eckelman, adding that the curriculum revisions went hand in hand with improvements in other areas such as admissions and career services.

On the career side, an increasingly wide variety of industries are recruiting Carroll School MBA students. For example, consulting roles now account for 24 percent of the jobs offered to Carroll School full-time MBA students—up from nine percent in 2017. That is exactly on par with the percentage of MBA graduates who landed jobs in financial services—the Carroll School’s traditional stronghold of employment prospects for graduating students.

U.S. News unveiled its “2023 Best Graduate Schools Rankings” on March 29. The publication bases its rankings on a mix of factors, among them reputation (assessments by business school deans and company recruiters), student selectivity, and job placement as well as starting salaries.