A Challenge for Business Schools

We must take a both/and approach to the competing paradigms of management education
March 24, 2022 | by Andy Boynton and Tracy Couto

Editor’s note: Increasingly, the mass production model of management is sharing the stage with a new people-oriented paradigm, more attuned to the needs of workers, the environment, and society. Should management education simply trade in the old model for the new one? In this reflection, Dean Andy Boynton and Tracy Couto of Le Moyne College take the long view—and offer a both/and perspective. They begin with a sketch of the industrial and management history that led to the standard business-school curriculum, and more recently has highlighted the need for new approaches to content and teaching in the schools. Management education is now faced with two competing paradigms—the traditional model and the newer approach focusing on human development and social responsibility. “Neither paradigm . . . will go away. Our responsibility as educators is to embrace and hold space for both worldviews,” the authors write. What follows is an abridged version of their article published earlier this year by the Journal of Case Studies. Most deans, faculty, students, and other stakeholders agree that we need more ethics and social responsibility content in our business school curriculums. That is not news. The more interesting questions have to do with why this need is emerging now and ultimately how we should respond to this challenge—which includes creating content that addresses the curriculum gaps. A quick, deep dive into the history of industry and management will begin to throw light on those questions.

The logical starting point is the massive transition from an agrarian and craft-based society to an industrial society in Europe and the United States, most notably during the Industrial Revolution of the 1800s and early 1900s. This complex transition eventually led to the societal foundations of what Michael Piore and Charles Sabel have aptly described as the “first industrial divide.” Highlighting the divide were mass production, bureaucracy, rigid organizational structures, competitive strategy, and much modern management advice.

The sheer force of this industrial tsunami cannot be underestimated. Its influence affected virtually all aspects of our society—labor, education, government programs, technological change, financial systems and markets, and more—leading to today’s consumer culture. What we know as management education was shaped and formed according to the model of mass production. 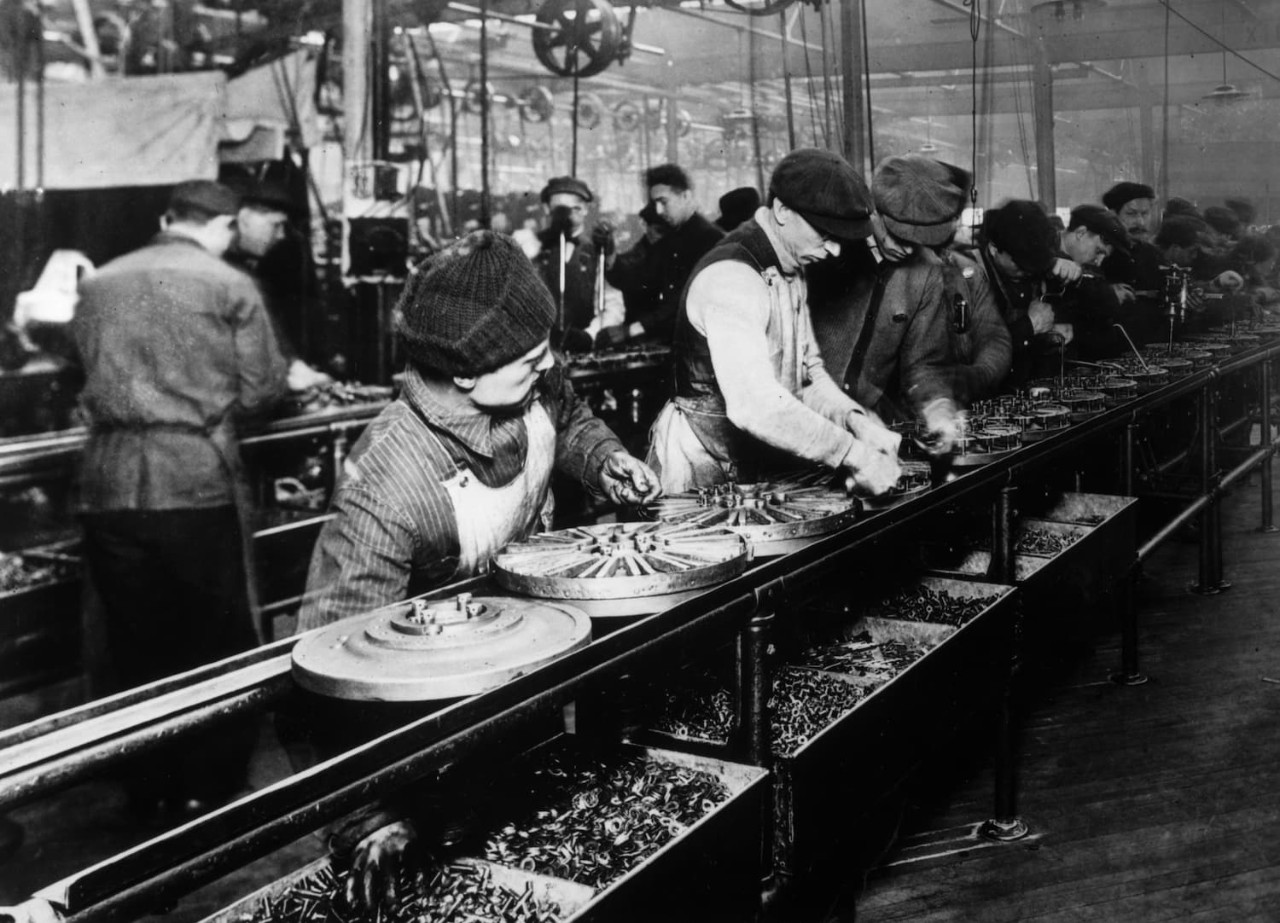 Higher wages allowed Henry Ford to "implement standardization on the assembly line and in the broader workforce," say the authors.

Doubtless, there were and still are many benefits of this society-wide mass production model of economic development. It has featured, among many elements, affordable products, available jobs, and competitive wages for many. Witness Henry Ford’s decision to pay factory workers a promised five dollars a day, more than double the average factory worker pay at the time. Why a higher wage? Because it stabilized the workforce—a prerequisite for long production runs—and allowed Ford to implement standardization on the assembly line and in the broader workforce. In addition, mass production necessitated new production technologies and created affordable products and services for the masses.

From a management perspective, this model focused almost exclusively on increasing and quantifying economic and corporate growth, while privileging mechanisms such as market share, profit, cash flow, process control, and scale production to assess and describe how a company is performing. Especially in its earlier stages, industrialization under mass production also relied on the strict separation of management and labor, when it comes to thinking and execution. That is, managers think; workers do, according to the view that prevailed. Planned and efficient work became the norm, in keeping with the exacting guidelines of Frederick Winslow Taylor, the master of scientific management. In an idealized sense, workers were understood as parts of the industrial machine (performing tasks that today might be carried out by robots or numerically controlled machines) to reduce variation and error, drive down costs, and ensure consistent quality output.

In this model, “losing” means losing customers, profit, labor, and raw materials, and winning means growth and the accumulation of more workers and resources. The consequences of this “progress” had a profound influence on the shape of the modern-day firm as well as on business schools. The typical curriculum clings to an array of familiar questions, including those dealing with industry analysis, competitive dynamics, economies of scale, maximization of shareholder value, contemporary accounting practices, and consumer brand management. These and many other topics are (as we will explain further) necessary for students to engage with, but not a sufficient foundation for the 21st century management curriculum.

See the most recent edition of Carroll Capital

Amid these historical developments, lurking on the outskirts were different organizational forms and management methods that complement
industrialization and mass production. Alternative methods, like craft
production, are based on individually owned tacit expertise, skilled workers, and tailored production runs. During the onslaught of industrialization, craft production kept alive the idea, even if on the perimeter, that people and talent matter most. Later on, thought leaders cropped up to propose a very different paradigm of management, leadership, and subsequent management education. For example, in the 1920s and ‘30s, the brilliant Mary Parker Follett brought to the public consciousness a more-modern perspective, creating tension with the dominating mindset of Fordism and Taylorism and presenting a more democratic approach to management that helped birth the idea of “leadership.”

Over time, people and the skills and talent they embody emerged as central to corporate success. Though mass production did not die, we have witnessed the re-emergence of craft. This new dawn is marked by an explosion of expertise in knowledge fields ranging from software and digitization to engineering and investing. These and many other disciplines often play vital roles in a firm’s success and rely on professionals who contribute based on what they know (their tacit knowledge and judgment). Such individuals are modern-day craftspeople and carry valuable and often difficult-to-transfer expertise that large-scale mass production firms increasingly require to compete effectively. “Thinkers,” at all levels, have become central to firm success. This growing emphasis on people (experts, scientists, managers, and skilled professionals) has begun to influence our curriculum and how we teach. Essential leadership strategies and theories wrestle between two vital needs—fostering material and corporate growth, on the one hand, and nurturing and developing the people who work in a company, on the other. The blind pursuit of profit and growth above all else has been met with an array of competing goals. Yes, teaching students the fundamentals of high shareholder value remains important. Still, today’s curriculum must highlight a broad range of other topics that demand equal attention.

The called-for content includes essentials such as ethical frameworks for managing and leading diverse talent, servant-based leadership models, and corporate social responsibility. This content is, in other words, not merely a “nice to have.” At the same time, both competing paradigms—industrial and competitive vs. developmental and societal—are necessary. Mass production tenets are still alive and well, but employees, communities, social wellbeing, and sustainability are also now central.

What does the future hold as the industrial paradigm collides with alternative management models? The pendulum continues to swing toward the power of people—talented (and mobile) knowledge professionals and experts—and the world in which they live. A rapidly growing number of firms believe they have a responsibility not only to shareholders but also in relation to a host of concerns that cluster around empowering talent and invigorating social responsibility.

Selections from Dean Andy Boynton's bookshelf, including volumes reflecting the traditional model of management education (on the left); and those representing the newer model (on the right), most of which have been authored by Carroll School faculty and experts.

The result is that curriculum needs are more complicated than ever. Business schools and faculty are looking to insert ethics and social responsibility cases into management learning, at a time when most schools are still dominated by contemporary management coursework highlighting the competitive dynamics of an industrialized, mass-production society (the first industrial divide). We need new ideas to serve today’s students and transform them into effective future leaders.

Today’s focus has to shift in part to a more developmental educational framework that includes people, society, and the environment. Neither paradigm—mass production/competitive or developmental—will go away. Our responsibility as educators is to embrace and hold space for both worldviews.

Faculty need to find and implement compelling real-world cases involving ethics and social responsibility, as they meet the challenges of this second developmental paradigm. These materials and case studies can ignite and enliven a classroom, in creative tension with the traditional competitive approach to management. Perhaps the greatest challenge is one of balance: forging discussions with our students about how the paradigms pose a question of both/and, rather than either/or.

Authors’ note: We would be more than happy to share a PDF of the full article—including summaries of a selection of case studies highlighting corporate social responsibility and sustainability. Those interested may request a copy by email to Andy Boynton (csomdean@bc.edu).